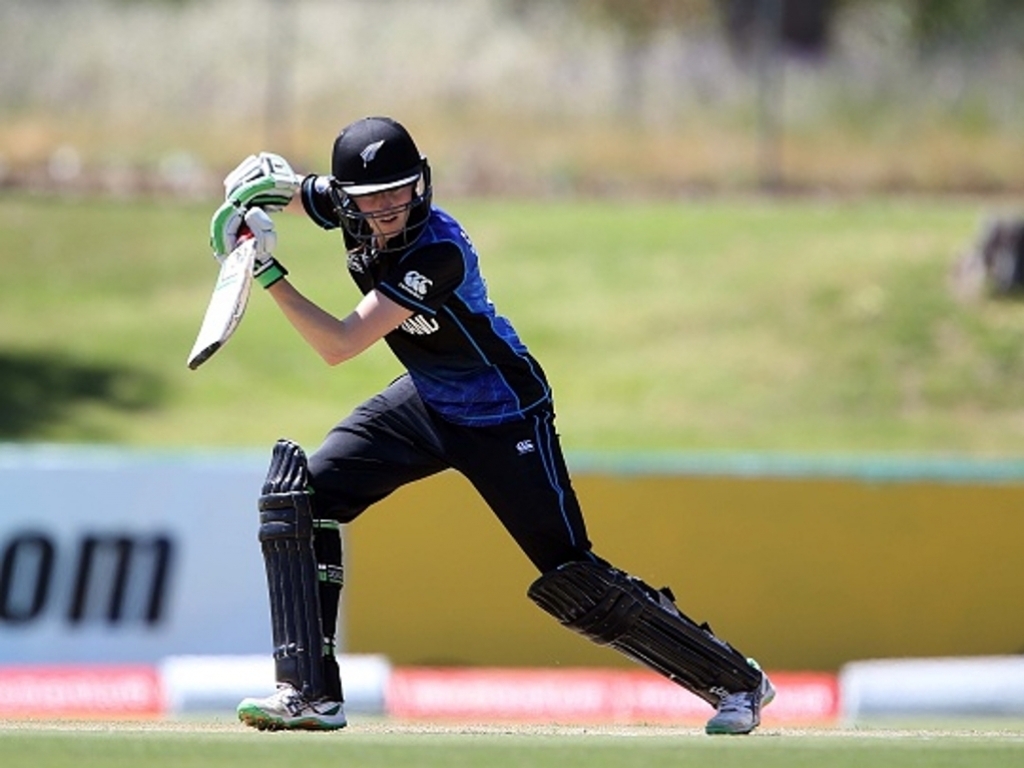 Underlining the strength of the current White Ferns group, the only women to have topped Satterthwaite’s unbeaten 137 off 117 balls against Pakistan in the second One-Day International are, in fact, three of her current team-mates: captain Suzie Bates (168 v Pakistan in Sydney 2008/09), Rachel Priest (157 v Sri Lanka at the same Lincoln ground last season) and Sophie Devine (145 v South Africa in India 2012/13).

First drop Satterthwaite reached her third ODI century off 102 balls — posting the three figures with her 10th boundary, collected from off-spinner Nida Dar, in a masterful innings that gathered strength as she held court across almost 39 overs.

Satterthwaite had entered the match at 53/1 after Bates (32 off 34 balls) had got her side off to a power start in partnership with Rachel Priest, before falling to opposing skipper Sana Mir’s first delivery of the match at the start of the 12th over.

Satterthwaite would then join forces with Katey Martin to slather on a New Zealand record 150 runs for the third wicket, eclipsing the mark of 138 set by Debbie Hockley and Maia Lewis against Australia in 1996/97.

Both batsmen reached their half-centuries courtesy of respective boundaries off pace bowler Asmavia Iqbal, the resurgent Martin having been let off on 2* when Sidra Nawaz missed a stumping chance off captain Sana Mir.

Martin’s ultimate 65 off 72 represented her third half-century in her last four innings for New Zealand, then the White Ferns pair put the foot on the accelerator at the 35-over mark — Satterthwaite driving and sweeping with aplomb.

Martin was unfortunate to be run out at the non-striker’s end after a Satterthwaite straight drive deflected off the bowler, but Sophie Devine’s entry would only increase the pain for the Pakistani attack as the big-hitter produced the first six of the innings.

Devine raced to 34 off 29 balls, adding a 58-run stand with Satterthwaite for the fourth wicket from just 46 balls while the first drop ticked off the remaining 13 runs required for a hundred at almost run-a-ball pace.

The White Ferns’ defence of an imposing tally of 309 for four — their sixth highest in One-Day Internationals — was threatened only by the light rain that forced players from a cool Bert Sutcliffe Oval after just 7.2 overs of the reply.

By then, Pakistan was 24/1 after pace bowler Hannah Rowe had made an early breakthrough, but 20 overs were required for the match to be confirmed — and for Satterthwaite’s career-best effort to stay in the record books.

The interruption proved short-lived though with Nain Abidi (45) and Nahida Khan (33) going on to a 76-run stand for the second wicket before the pair found themselves back in the pavilion in the space of six balls, Abidi departing caught and bowled to Bates before Thamsyn Newton picked up the dogged opener in a wicket maiden

Newton was one of four changes to the Kiwi XI, Priest back behind the stumps and Devine, Newton and Liz Perry all getting their first start of the home Series as the team continues its depth and contingency planning towards next year’s World Cup.

Bates struck again in the 26th over, bowling Nida Dar to reduce the visitors to 110 for four, before rain returned in the 35th over to stall the chase at 142 for four. The White Ferns won by 60 runs under the Duckworth Lewis Stern system.

Player of the match Satterthwaite has now scored 618 ODI runs from 12 innings in the 2016 calendar year at an average of 68.33 and strike rate of 88.87. Her unbeaten century also moved her above Sara McGlashan among the all-time ODI run-scorers for the White Ferns, her 2,516 career aggregate now behind only Debbie Hockley, Suzie Bates, Haidee Tiffen and Emily Drumm.

New Zealand lead the five-match Series 2-0 heading into the third ODI on Sunday at the same venue. Sunday’s match will be the first match of the Series on which IWC qualification points will be riding, as the White Ferns look to cement direct entry to next year’s World Cup.