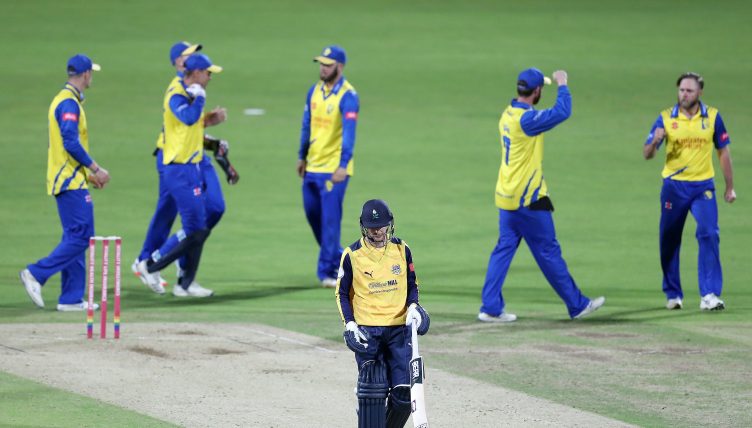 Yorkshire had to make do without four key players again due to Covid-19 protocols as they were beaten by Durham by 43 runs in the Vitality Blast at Headingley.

The club confirmed that Matthew Fisher, Tom Kohler-Cadmore, Josh Poysden and David Willey were advised to self-isolate for 14 days, ruling them out of the rest of the group stage, with the latter announcing on Twitter that he had tested positive for coronavirus.

The Vikings struggled without them again, having lost their last game to Lancashire, as they were dismissed for 104 in the 17th over in pursuit of 148.

The victory kept Durham’s qualification hopes alive, leaving them three points behind second-placed Lancashire, who they play on Friday.

Durham reached 40 without loss after four overs, only to slip to 147 all out as South African fast bowler Duanne Olivier claimed two for 16 from four overs.

In reply, Yorkshire lost England’s Dawid Malan for a golden duck and failed to recover.

Yorkshire, for whom stand-in skipper Adam Lyth and Jordan Thompson also claimed two wickets, and Durham came into this game in contrasting form.

And it was buoyant Durham who made a fast start having been inserted, with Graham Clark hitting three fours and a six in a brisk 28, the top score in the innings.

But Clark and opening partner Alex Lees fell within two overs of each other – Lees caught and bowled by Lyth’s off-spin and Clark caught at long-on off the same bowler as the score fell to 57 for two in the eighth.

Ben Raine maintained Durham’s momentum with successive leg-side sixes to end the eighth over, but he was caught behind cutting at off-spinner Jack Shutt.

Farhaan Behardien then dragged compatriot Olivier to mid-on in the 11th, leaving the visitors at 81 for four.

Brydon Carse counter-punched with a couple of lusty sixes down the ground off Shutt and Thompson, only to be caught behind the ball after hitting the second six as the score fell to 110 for six after 15.

Olivier further applied the brakes by getting Coughlin caught at mid-off in the 18th before Liam Trevaskis was run out in the penultimate over, in which Ben Coad also had Potts caught at long-on. Scott Steel was also run out in the last over.

But that was far from the end of the drama.

Lyth cut the first two legitimate balls of the innings from left-arm spinner Trevaskis for four, only to miscue Potts to mid-on in the second.

Next ball Malan chopped on, and when Harry Brook also miscued the same bowler to mid-on in the fourth, Yorkshire were 22 for three with their big guns gone.

Durham captain Nathan Rimmington then trapped Jonny Tattersall lbw as the score fell to 48 for four in the seventh, with 100 runs still required.

Will Fraine top-scored with 28, only for him and George Hill to fall in successive deliveries in the 10th and 11th overs.

Hill was bowled by Coughlin and Fraine was caught behind off Carse.

The end came very quickly from there as James Wharton chipped Coughlin to cover and the same bowler later got Thompson caught in the deep.

Either side of the Thompson wicket, wily Trevaskis had Ben Coad stumped and Olivier bowled, sealing the win with 20 balls to spare.