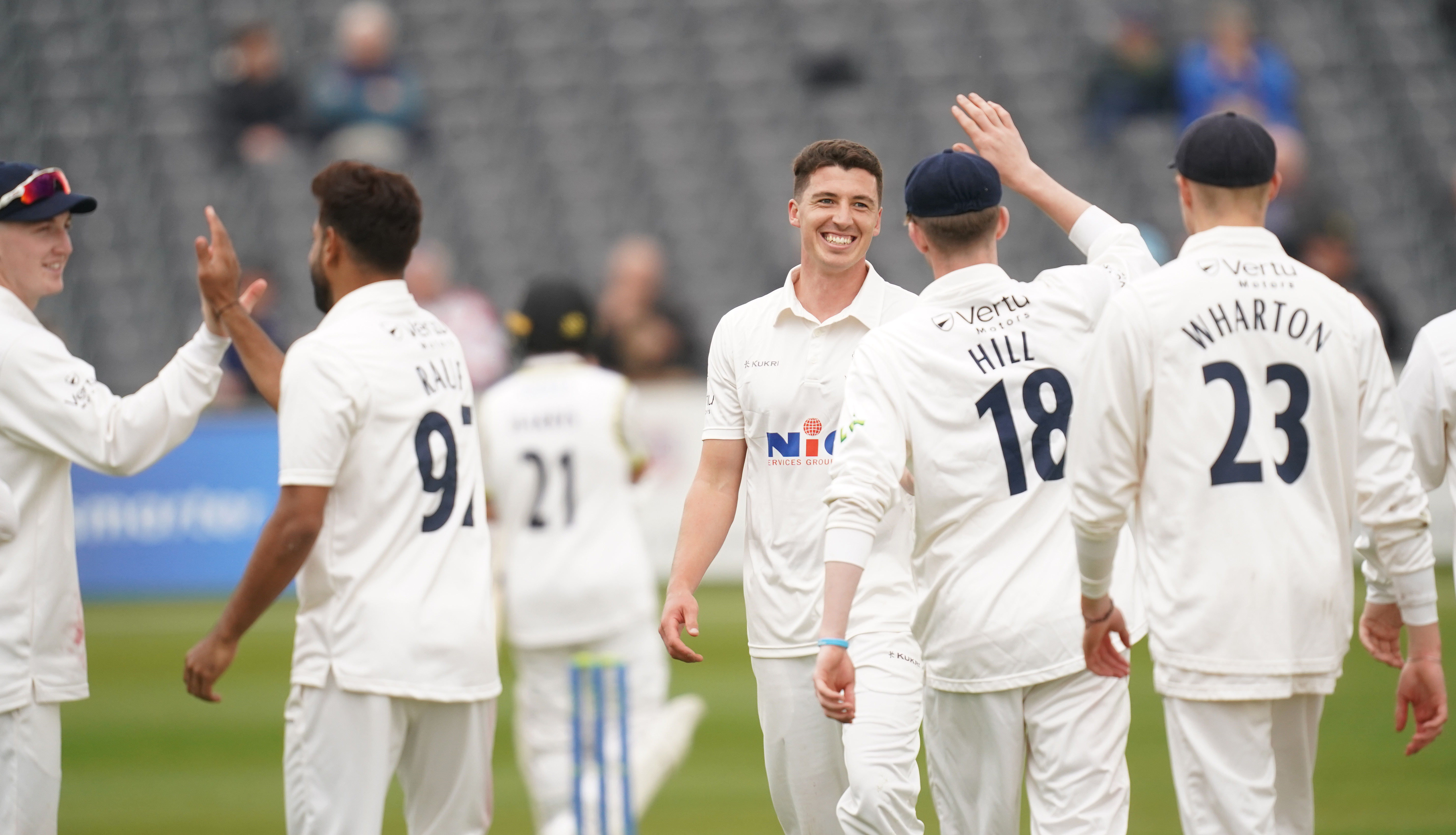 Yorkshire emerged from a turbulent winter to blow Gloucestershire off course at Bristol.

Gloucestershire were sailing along at 152 for three as Yorkshire, having not played in the opening round of LV= Insurance County Championship fixtures, got their 2022 season underway.

But the hosts, for whom the Australia batter Marcus Harris made 136 on his debut, saw their last seven wickets fall for 75 runs as Yorkshire seized the initiative.

Matthew Fisher, refreshed after winning his maiden England cap on the tour of the West Indies, was the star bowler with eye-catching figures of 14.1-6-19-4.

Pakistan’s one-day international paceman Haris Rauf took three wickets on his debut, and Yorkshire avoided any bother in reply as Adam Lyth and George Hill guided them to 37 without loss.

Interim managing director Darren Gough was among those present as Yorkshire took to the field for the first time since the racism scandal that engulfed the county and shook English cricket to its core.

The grey skies hovering over the County Ground as the players stepped onto the field provided a fitting metaphor for Yorkshire’s troubled winter.

Having won the toss and chosen to bowl on a green strip, Fisher and Jordan Thompson delivered a tight opening line to concede only two runs from seven overs.

Harris was spilled by wicket-keeper Harry Duke on 18 – a drop that was to prove extremely costly – and the first wicket was worth 50 when Ben Charlesworth fell for 18.

This time Duke held on behind and Fisher claimed a second victim on the stroke of lunch as James Bracey edged to Lyth at second slip.

England spinner Dom Bess was introduced just before the interval as Yorkshire used six different bowlers in the opening session.

Harris struggled for runs in the Ashes last winter by making only one half-century against England, 76 at Melbourne.

But the 29-year-old flourished in front of his new fans, showing the form he enjoyed at Leicestershire last summer when averaging nearly 55 in four-day cricket.

Harris leaned on some delightful cover drives with Rauf, who only met his new teammates for the first time last week, generating good pace but lacking accuracy in his first two spells.

Yorkshire did make headway in the afternoon session as Graeme Van Buuren drove Steven Patterson into the safe hands of Lyth on 21.

Miles Hammond (20) and Ryan Higgins (6) then both fell to injudicious pull shots as Rauf took his first wicket and Fisher his third.

In between, Zafar Gohar was stumped by Duke off Best and Gloucestershire had lost five wickets for 29 runs.

Harris powered on to three figures before falling to a top-edge pull off Patterson, his 136 compiled from 231 balls and containing 22 fours and a six.

Ajeet Dale was the last man out in becoming Fisher’s fourth victim and Rauf ended with three for 81 and Patterson two for 43.