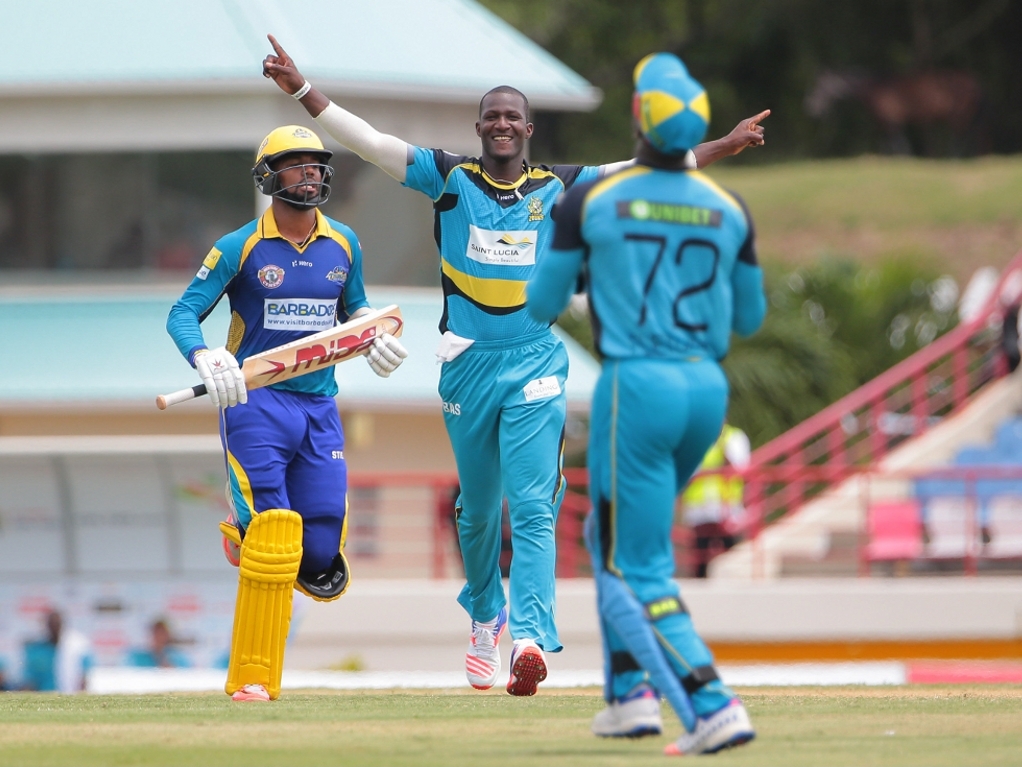 The St Lucia Zouks have made it two Caribbean Premier League (CPL) wins in two at the Darren Sammy National Cricket Stadium thanks to the bowling of Sammy himself and runs from Johnson Charles and Andre Fletcher.

The win takes them to six points and makes qualification for the knockout stages for the first time in their history a real possibility for the St Lucian side.

Chasing just 138 to win Charles and Fletcher got the home side off to the best possible start. In the first 10 overs the openers managed 80 runs without losing a wicket. It was a quiet start until the ninth over that was delivered by Imran Khan. That one cost 17 runs as Johnson Charles smashed two sixes.

The Zouks lost Fletcher not long after that when he nicked a low catch through to Nicholas Pooran behind the stumps. Charles was joined by Shane Watson who could well have departed on 10 when he skied a catch off Ravi Rampaul that was well caught on the rope by Shoaib Malik. It was a no ball from Rampaul though, and Watson was reprieved.

A short rain delay abbreviated the chase by one over meaning that when play got back underway the Zouks needed 30 runs from 36 balls. It looked to be a cruise for the home team but the Tridents were given some hope when Charles went for 41 to the second ball after the resumption.

Watson also departed before the end of the game to a brilliant tumbling catch by Ahmed Shehzad but the Zouks cruised home with 15 balls and seven wickets to spare.

It was a steady start by the Tridents after they won the toss and decided to bat first. They reached 40 for no loss from their six over Powerplay with Kyle Hope and Shehzad batting attentively in the opening exchanges.

The first wicket fell when Shehzad completely misjudged a slower ball full toss from Sammy and spooned it straight up in the air. Sammy then picked up his second when Shoaib Malik mistimed a short ball and he was well caught by Mike Hussey on the midwicket boundary.

While wickets were falling at the other end Hope was making his career best T20 score, finishing with 55 from 48 balls – his first fifty in this format. The Tridents have struggled to find a successful opening pair in this tournament and Hope’s performance bodes well for the Barbados team going forward.

Hope and captain Kieron Pollard came together with the score on 60-2 and looked to set a platform from which they could launch in the death overs, but neither man got that far. First Hope lost his wicket to Sammy, Hussey once again the catcher at mid-wicket.

Then Pollard departed to a brilliant caught and bowled from Delorn Johnson who swooped low in his follow through to pull off a great grab.

Going into the St Lucia leg of the tournament local hero Sammy had claimed just one wicket in three matches. Since arriving in Beauséjour he has claimed four wickets in two games. In this match he finished with figures of 3-18 from his four overs.

When Nicholas Pooran also fell going to a big shot the Tridents had stumbled to 98-5 in the 16th over. Things got worse when Shamar Springer and David Wiese had a horrible mix up and West Indies Under-19 star, Springer, was run out by the length of the pitch.

Wiese struck some lusty blows, but the Tridents lower order couldn't do the job that the top order had failed to do as they reached just 137-8 thanks to some brilliant bowling from the Zouks, a total that was chased down with some ease.