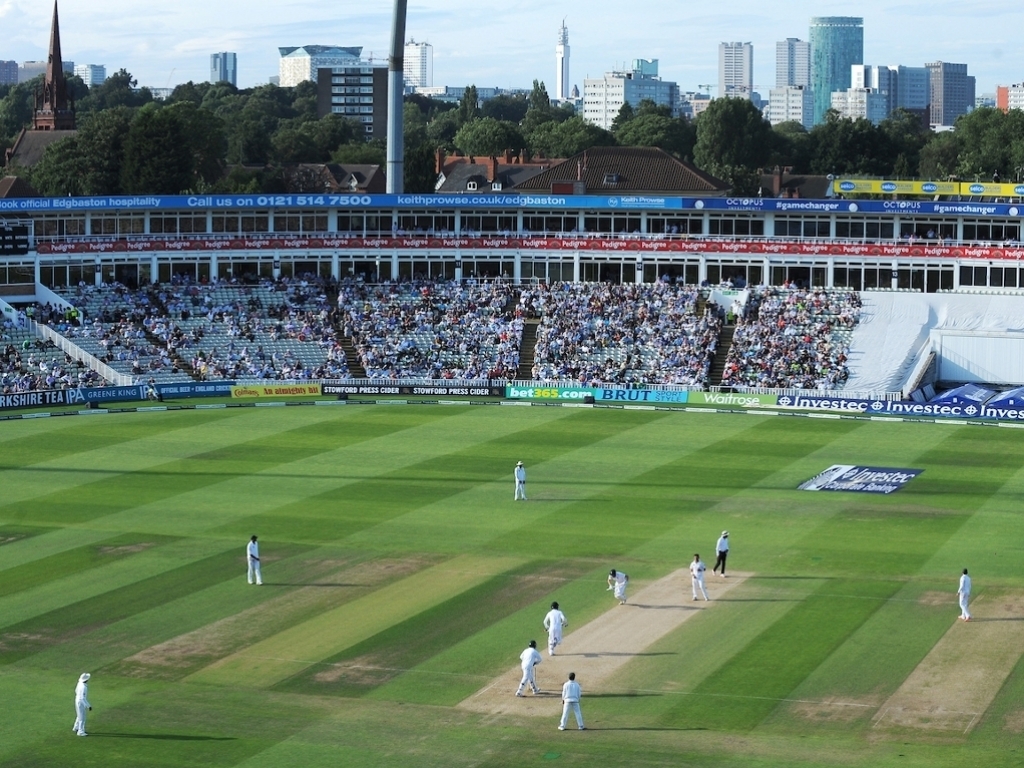 Before the Riverside’s promotion to Test status, Warwickshire’s Edgbaston was the baby of the grounds on the regular rotation.

Test cricket was first staged at Edgbaston in 1902, but was an infrequent visitor in the ground’s early years: only four Tests were played there in the next quarter-century. It has fallen by the wayside in recent years again, with only one Test since 2012.

When the ‘Bullring’ gets going it can be tough for visiting teams, reflected in the fact that England have a better record here than at any other major venue.

The heatwave in England has led to drier than usual conditions across England but the Edgbaston pitch retains a healthy green tinge ahead of the first Test against India.

Here’s the Edgbaston pitch for the first Test. Looks similar to previous Tests here. Not convinced spinners will play as big a part as some think: pic.twitter.com/ZaTXmqPCE8

In a day/night Test England put the West Indies to the sword on the back of a double hundred from England’s all-time leading runscorer Alastair Cook.

England won the toss and electing to bat first put some serious scoreboard pressure on the inexperienced West Indies team with a total of 514 for 8 declared that included a century from skipper Joe Root.

The seamer’s had no trouble scything through the tourists with the pink duke ball with no single bowler really standing out as wickets fell at regular intervals.

The Windies managed just 168 and 137 in their two innings and lost by an innings and 209 runs.

England’s Stuart Broad said of the ground: “Edgbaston feels like our Gabba so to speak, in the way the crowd roar behind us and I think some of our results reflect that.”

Broad stressed this week that adaptability would be key for both sides, he told ESPNCricinfo: “It will be a really exciting series as both teams don’t know what the pitch will do neither the groundsmen really know because probably they haven’t experienced this sort of weather in England for a long time. The lack of moisture that has been around, players will have to adapt.”

Jimmy Anderson surpassed Fred Trueman’s record of 39 Test wickets at Edgbaston the last time a Test was played in Birmingham, he has 40 scalps in nine Tests at the ground.

There aren’t many grounds in England where Alastair Cook doesn’t lead the way in the current England squad and his 856 runs at Edgbaston have come at 65.84 making it one of his best grounds in terms of consistency.

Ishant Sharma is the only India bowler with Test experience at the ground but claimed just a single wicket in the Test he played there in 2011.

Bizarrely Ishant also leads the current squad in runs at the ground with an equally uninspiring total of four.

The summer may be gradually waning but it should still be warm in Birmingham throughout the Test with very low chances of rain.

Runs on the board could be key with so many unknowns heading into the contest. We expect both Virat Kohli and Joe Root will choose to bat first should the coin favour them.

A concerted effort has been made to ensure that the pitch offers assistance to seam-bowlers and despite the long hot summer the surface appears to be a standard one for Edgbaston. What lies beneath that surface though, only time will tell.