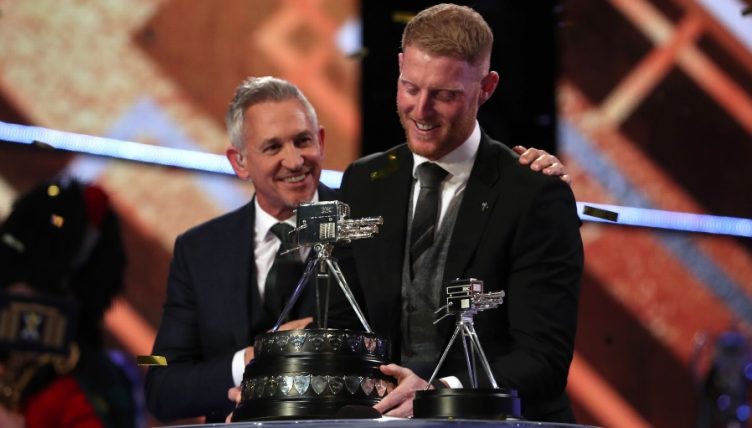 Ben Stokes’ incredible summer has secured him the BBC Sports Personality of the Year award for 2019.

The 28-year-old held his nerve as England triumphed in a Super Over to win the Cricket World Cup in July, and just over a month later his glorious unbeaten 135 at Headingley won the third Ashes Test for England.

READ: SPOTY favourite Stokes is the hero we needed in 2019

Stokes’ sizzling summer had made him the overwhelming bookmakers’ favourite for this award, and the public vote saw him finish ahead of Lewis Hamilton and Dina Asher-Smith at the event in Aberdeen on Sunday night.

“The Ashes well and truly alive because of one cricketer!”

Ben Stokes wrote his name into #Ashes folklore with an astonishing 💯 as England levelled the series with a historic one-wicket win at Headingley. #AshesBitesize pic.twitter.com/QTPmh2nyqQ

“Obviously it’s an individual award but I play in a team sport and the best thing about that is you get to share special moments with team-mates, backroom staff and management who make days like we had in the summer possible.

“I’m up here receiving this award but without the efforts you put in this summer, I wouldn’t be up here doing that. So thank you so much.”

It is a story of redemption for Stokes, who in 2018 was cleared of affray charges following an incident outside a Bristol nightclub in September of the previous year.

So many people for Ben Stokes to thank.

Stokes added: “Two years ago was a tough time for me in my life. I’ve had so many people help me through that. My fantastic manager, friend Neil Fairbrother is here tonight. You are more than an agent as you get called these days. You’re an incredible human being and an incredible man. I literally don’t know how you’ve put up with Andrew Flintoff to start with and then me!”

🗓 One week ago
🔥The greatest finish in cricket history
🏆 WORLD CHAMPIONS 🏴󠁧󠁢󠁥󠁮󠁧󠁿

Stokes and his fellow World Cup winners were named Team of the Year while the moment the trophy was secured claimed the Greatest Sporting Moment of the Year award.