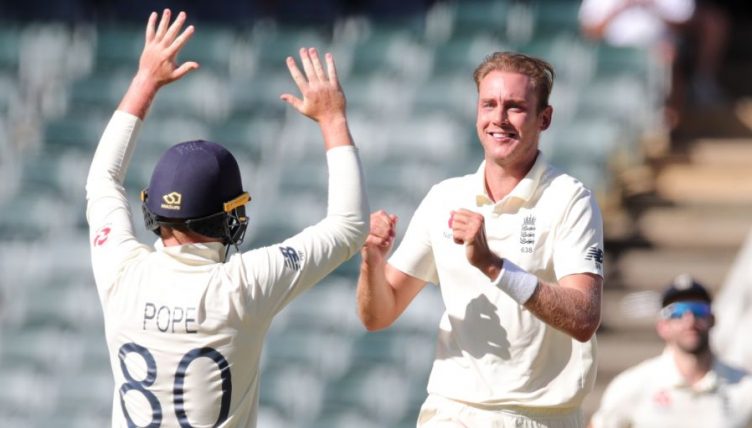 Stuart Broad has become the latest player to be sanctioned for loose language in England’s Test series against South African, losing 15 per cent of his match fee and picking up one demerit point for swearing at Faf Du Plessis.

Jos Buttler and Vernon Philander both received identical penalties for trading abuse on the field, while Ben Stokes was rapped for an angry exchange with a fan after being dismissed in Johannesburg.

Broad was involved in a tetchy exchange with Proteas captain Du Plessis during the fourth afternoon of the final Test and was deemed to have gone too far by on-field umpires Rod Tucker and Joel Wilson.

Du Plessis was clearly angered and his shoulder made contact with Buttler as he advanced in Broad’s direction. However, it is understood Du Plessis has not been charged by the match officials, who reviewed the incident and were satisfied the contact was unintentional.

Broad was penalised under article 2.3 of the ICC’s code of conduct, relating to “use of an audible obscenity during an international match”.

The 33-year-old paceman now has two demerit points on his record, with four points in a two-year period enough to activate a ban.

Du Plessis spoke about the incident after the match, which England won by 191 runs to seal a 3-1 victory in the Basil D’Oliveira Trophy.

“It was just myself and Broady having a go at each other,” he said.

“There was just some words from Broady and then a retaliation. I didn’t even see (Buttler) was there. There was nothing malicious. He was trying to diffuse the situation.”

Despite the recent spate of disciplinaries, England captain Joe Root is proud of how his side have carried themselves on the tour.

“There are times in the series where things might slightly boil over and guys get it wrong but I don’t think we’ve got a bad group of guys at all,” he said.

“We’ve got a huge amount of respect for the opposition and for people in the ground. Guys can get it wrong and unfortunately we’ve seen that a little bit in this series, but if you speak to any one of the guys they’ll always give you time, they’ll respect the people in the stadium and sign autographs.

“There’s definitely no bad blood between the sides in my opinion.”