Look around the Sheikh Zayed 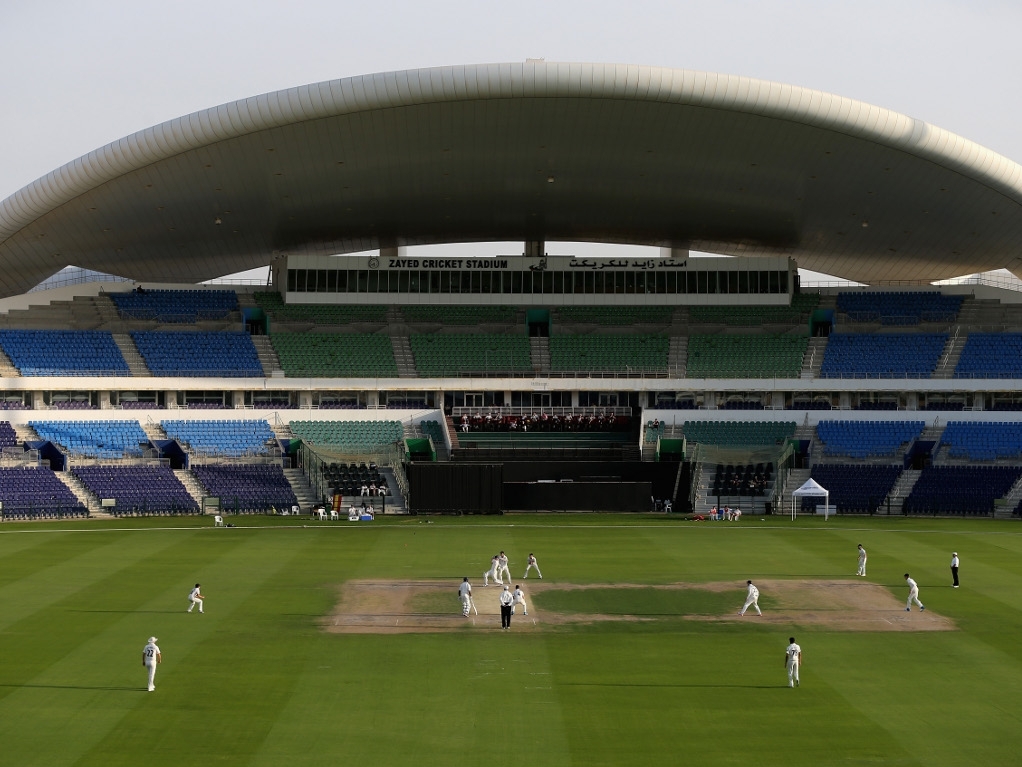 Overview
Named after president Sheikh Zayed bin Sultan Al Nahyan, the ground is situated on the outskirts of the suburbs and cost in excess of 22 million US dollars to build.

While its UAE neighbour Dubai brags an innovative lighting system, dubbed the 'ring of fire', and lavish stands, changing rooms and pavilion, this more modest arena makes do with standard floodlight pylons, twin grass embankments on either side of the pitch and air-conditioned glass rooms. Shade is hard to come by for spectators, who need to drive about 30 minutes from the city centre to get to the ground.

Last Time Out
The most recent Test here, in the biggest of the Emirati nations, was in January 2014, between Pakistan and Sri Lanka. The match ended in a draw, with Pakistan opting not to chase the 302 required to win.

Pakistan won the toss and opted to field, and did well to restrict the Sri Lankans to 204 all out, with only Angelo Mathews' 91 a score of significance. Junaid Khan, who is injured now, took a five-fer in that innings.

While the hosts got off to a poor start in their first dig, centuries from Younis Khan and Misbah-ul-Haq propelled them to 383 all out. Rangana Herath and Shaminda Eranga took three each, demonstrating that pace and spin had a place here.

Sri Lanka were more successful second time around, racking up a whopping 480 for five declared. Mathews again shone, with 157 not out, while Kaushal Silva, Dinesh Chandimal, Kumar Sangakkara and Prasanna Jayawardene all added half tons. Junaid took three more wickets.

Thus, Pakistan needed 302 to win in two sessions, and they reached 158 for two. The batting was easier than anticipated, with Mohammad Hafeez and Ahmed Shehzad both making fifties for the fun of it.

Happy Hunting Ground
The Aussies have never played here, and thus have no happy hunters, but Misbah has played in all five Tests at this ground. He is thus the leading run scorer, averaging 90-odd, and with two centuries and three half tons in eight innings.

Younis Khan has also played in all the Tests here, with a top score of 136, while Azhar Ali has three half centuries in the four games he's played here. It's a batting haven, more so than the other UAE grounds.

Bowling-wise, Junaid Khan and Saeed Ajmal are the leading wicket-takers with 18 apiece, but neither are available, through injury and a chucking ban respectively. You have to do quite far down to find the next current player, Hafeez, who has six wickets.

They Said
Australia captain Michael Clarke ahead of the second Test: "The wicket looks pretty good. Just batting in the two side wickets it seems like I think this wicket is going to stay a bit lower as the game goes on, more than spin.

"I don't think it'll spin as much as Dubai. I think it's going to be more lack of bounce. The plans don't really change in regards to our bowling. I think we've got to be really disciplined with our execution.

"Batting, again it's going to be hard to start. Reverse-swing is going to play a part. And because the ball is staying low you've got to fight yourself – in Australia it's good, consistent bounce so especially at the start of an innings you can play off the back foot a lot more.

"Here I think we've got to try and force ourselves to get forward to prevent the lbw. That's to the quicks. To the spin, like we've spoken about, using our bat more."

Steve Smith said of his attacking the spinners: "If you go out there and expect to see a few balls before you start doing your game plan that's when you're going to get into trouble. You're going to have to do it from ball one."

Weather
Clear, hot, not a drop of rain on any of the five days. Temperatures are set to be above 30 every day, and while it's not as humid here as in Dubai, it's going to be unpleasant.

Conclusion
Dubai did not spin as much as the Aussies expected and they over-compensated. Here, the record is better for fast bowling, which could hand the advantage to the visitors, especially when Mitchell Johnson gets the older ball to reverse.

As AB de Villiers has demonstrated many times, batting here is not hazardous once you get set, and Pakistan's batsmen are familiar with this ground. The Aussies will need to adapt quickly. but they should find the going a bit easier.