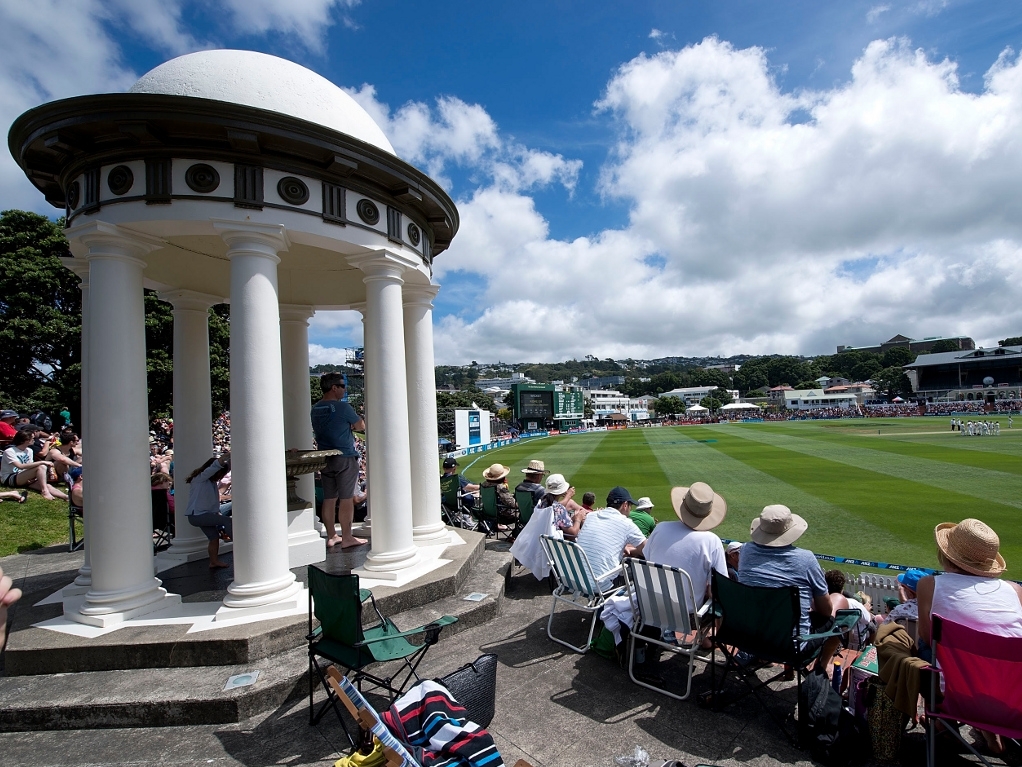 It wasn't until 1969 that New Zealand tasted victory on their most beautiful ground (it's protected by an Act of Parliament and is the only sports ground on New Zealand's National Heritage list) when the West Indies were the visitors.

The Basin Reserve owes its existence to an 1855 earthquake that levelled out enough ground for a cricket field, and is the scene of many of New Zealand cricket's finest moments: Sir Richard Hadlee took his 300th Test wicket here, while Martin Crowe (299) and Andrew Jones (186) put on 467 for the third wicket against Sri Lanka in 1990-1 – at that time a world record.

The most recent Test outing here was in February 2014, when India and the Black Caps played to a draw, which is the most common result here. The Indians did the traditional thing and opted to bowl first.

They did a cracking job with the ball, with Ishant Sharma taking six wickets and Mohammed Shami four, as the Kiwis were all out for 192. Only Kane Williamson managed to get out of the 30s, making 47.

India then made 438 in their first innings, with a ton to Ajinkya Rahane and 98 to Shikhar Dhawan. Pace continued to be more effective, with Trent Boult, Tim Southee and Neil Wagner taking three wickets each.

The Kiwis then batted the game to a draw by scoring 680 runs, with Brendon McCullum recording his country's first Test triple century. He made 302, while BJ Watling and Jimmy Neesham added centuries.

This left India needing an impossible 435 to win in two sessions, and they advanced to 166 for three by the end of day five, thanks to a century from Virat Kohli.

India captain MS Dhoni after the draw: "It's a fantastic country, the atmosphere was very good. The wickets are quite flat, with good bounce. Small outfield. Good fun for the fans. They appreciate good cricket, enjoy the opposition's success too. I love this venue and it was really good to witness Brendon's innings and the way the crowd appreciated his effort, not as an opposition captain but as a fan."

He added: "They batted really well, we will give credit to them but at the same time, what really needs to be appreciated is the will and the way our fast bowlers tried to get the opposition out on a really flat wicket."

Of the current players in the Kiwi side, Brendon McCullum and Ross Taylor have the best record here, with B-Mac's stats helped by the triple ton he scored here last year. He averages 41 at the ground, with six scores above 50 in 15 Tests.

Taylor averages a touch over 62 across eight Tests, with two tons to his name, while Kane Williamson has played only five matches here and averages 53, with a ton and a fifty to his name.

For Sri Lanka, Kumar Sangakkara is one of just two survivors from the last time they played here, in 2006. The other is Prasanna Jayawardene. Sangakkara scored a century in that game, which Sri Lanka won.

Bowling-wise, the current troops have played only a handful of games here, with Trent Boult leading the pack with 16 wickets in three games. Tim Southee has the same number of wickets, but in six games, averaging a below-par 42.

Temperatures are set to be in the low 20s for the entire game, with some cloud cover forecast for each day. While it doesn't appear to be too threatening, Wellington has a habit of requiring fans to bring a brolly.

This deck goes from lively on day one to flat for the rest of the Test, so bowling first is usually the best option, to try and take advantage of that short window of assistance. That being said, the deck is a good one for batting, as the high number of draws will tell you. New Zealand won't be too upset about that, given they already lead the series.