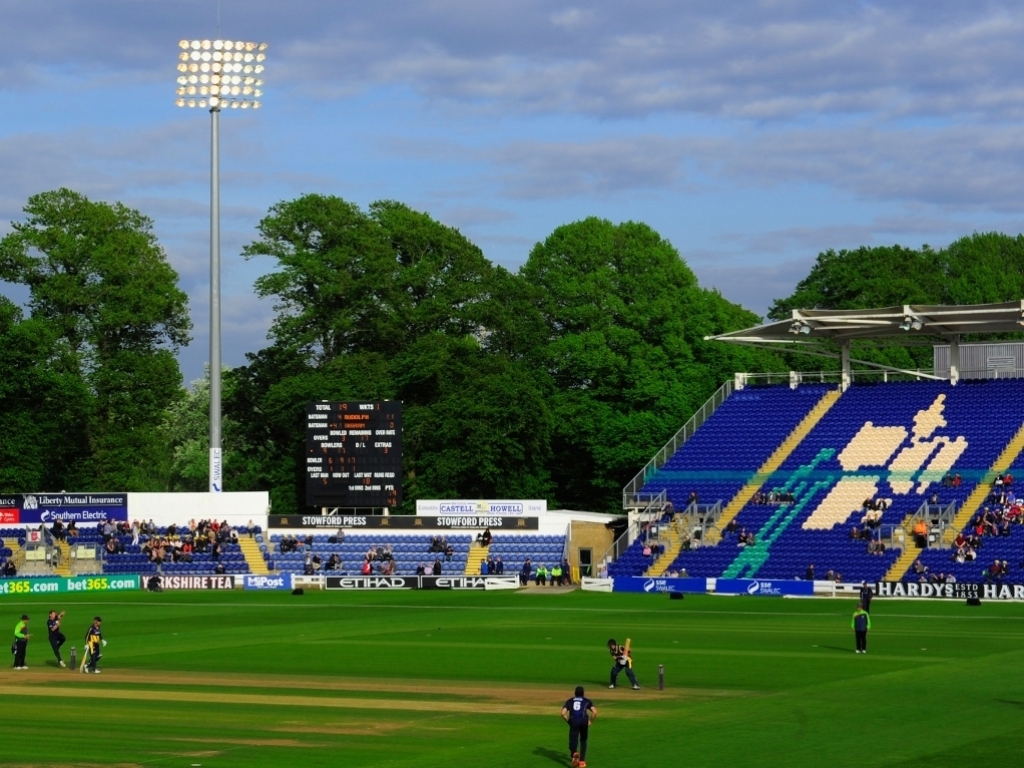 Sophia Gardens – now known by the suits by the rather less romantic moniker of the SWALEC Stadium – became the 100th ground to host a Test match when it was controversially chosen by the ECB as the venue for the opening Ashes clash in 2009.

Located on the banks of the River Taff in Cardiff, the ground has been the home of Glamorgan since 1967, with the county outfit securing a 125-year lease of the venue in 1995.

With the eye to hosting Test cricket, major redevelopment began in April 2007 – and just over a year and GB£9.4 million later competitive action returned to the upgraded stadium. They've only hosted two Tests since, though.

With it's state of the art facilities, Sophia Gardens was then awarded it's first Test in July 2009 – preferred by the ECB to fellow five-day virgins Durham and the Rose Bowl – and the choice caused something of a stir as Cardiff was seen to be jumping the queue ahead of the other two more 'English' grounds.

The venue has also hosted more than a few ODIs, the first being New Zealand's five-wicket win over Australia at the 1999 World Cup. The ground hosted six ODIs in 2013 alone, thanks in large part to the Champions Trophy.

The Aussies were also on the receiving end in 2005 when they were famously beaten by Bangladesh in an ODI encounter, also by five wickets.

The most recent Test at Cardiff was in 2011, when England thrashed Sri Lanka by more than an innings late on day five. It was a game of two halves, as both sides recorded 400 plus in their first digs, and then Sri Lanka were 82 all out in their second.

It was a shock win in a game that was headed for a draw. The first innings saw Sri Lanka score 400 all out, with Prasanna Jayawardene recording a century. James Anderson and Graeme Swann were the chief wicket-takers, bagging three each.

England then continued in the same vein, with Alastair Cook and Ian Bell recording centuries, while Jonathan bagged a superb double to. They racked up 496 for five declared, leaving Sri Lanka with a day to bat.

The visitors could not see it out though, as Chris Tremlett demolished the top order by taking four wickets, while Swann followed his first innings effort up with a four-fer in seven overs. Sri Lanka thus lost by an innings and 114 runs after tea.

Only three England players have played both Tests at this ground, namely skipper Alastair Cook, and fast bowlers James Anderson and Stuart Broad. Jonathan Trott has the most runs, thanks to his double ton last time out, while Cook averages 49.66 in three innings.

Michael Clarke and Brad Haddin are the only current Australians to have a record worth speaking about, Clarke having scored 83 in the drawn Test in 2009, while Haddin made a century. They recorded a massive 674/6 in that game, with four tons.

Mitchell Johnson and Peter Siddle bowled in that Test, the former taking five wickets in total, while the latter bagged three. For England, both Anderson and Broad have five wickets in two Tests.

Curator Keith Exton said: "We hope this one will have a little more pace, but we hope that we see an equally good game of cricket. This track had two T20 games on it last year and the ball went through well. It will start off as a classic Test pitch but if we have a lot of dry heat then the characteristics could change as the game progresses.

"We would need to have extremely high temperatures for it to become a spinning pitch. Which is very unlikely, but once the toss takes place, everything is out of our hands. If it stays cloudy and overcast, whatever you start with you'll probably finish with."

Michael Clarke ahead of the Test: "It's surprising how much grass is on it. From what I've seen today, and what the groundsman's telling me, I think we're going to see some sideways movement from the fast bowlers."

He added of the influence from overhead: "A lot of grounds around the world, you look at the pitch before deciding whether you're going to bat or bowl first. In the UK you look above more than at the wicket. When it's overcast you see a lot more movement around the country and when the sun's out it can be a really nice place to bat."

The first two days are set to be overcast, with the week building up to the match also not the sunniest, so the deck is not as dry as a spinner would have liked. Skies are set to clear for the most part by Friday, though Saturday and Sunday see a return to cloudiness. The rain appears to be set to stay away though, so here's hoping for a dry Test.

The build-up to the Test, with the overcast weather in mind, has seen the Australians suggest they may go with four genuine pacemen, leaving no room for a spinner. And though the groundsman has said it's unlikely to turn much, it tough to see Michael Clarke going in without Nathan Lyon, leaving the spin to part-timer Steve Smith.

England will also be pondering this question, with a lack of heavy sunshine to dry out the deck, and the chances of two spinners being picked is becoming ever more remote. Adil Rashid is set to have to wait for the second Test for a potential debut.

Clarke has suggested that whoever wins the toss will bowl first if the weather is overcast. But that could be mind games, of course.