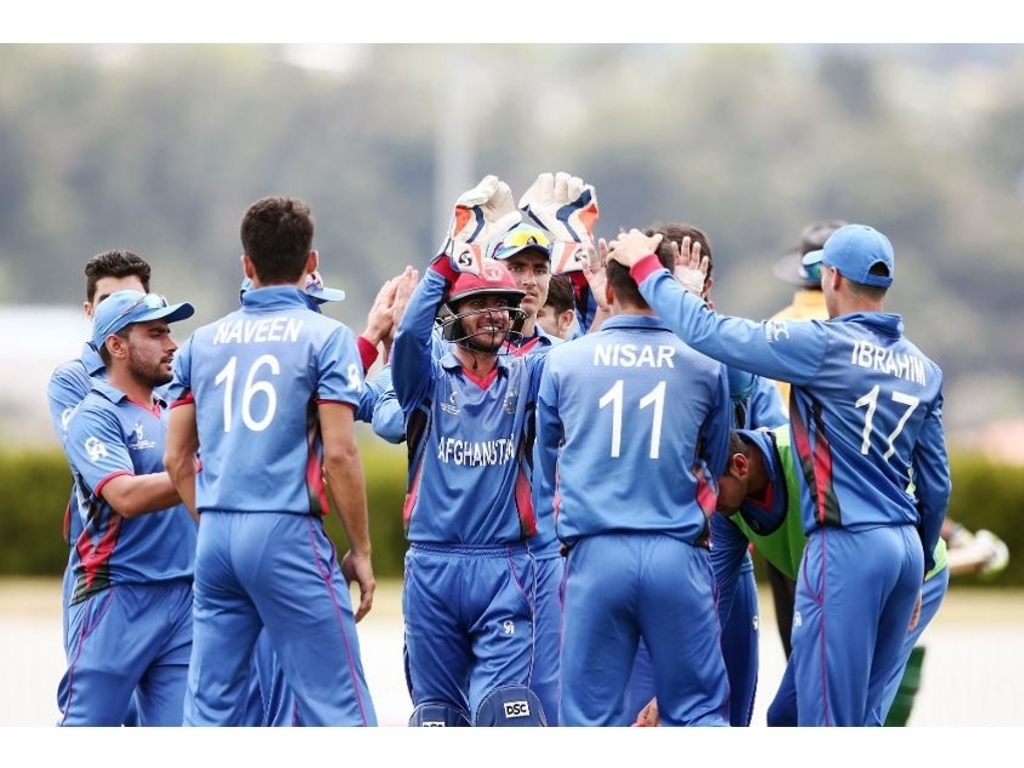 Afghanistan made their intentions clear at the Cobham Oval in Whangarei on Saturday comfortably beating Pakistan by five wickets in their Group D 2018 ICC Under 19 Cricket World Cup opener.

In what was largely a see-saw encounter, the 75-run stand for the fourth wicket between Ikram Ali Khil and Darwish Rasool proved the difference as Afghanistan rode on the latter’s unbeaten 78-ball 76 to open their account.

All of Azmatullah Omarzai (3/34), Qais Ahmed (3/38) and captain Naveen ul-Haq (2/30) were among the wickets as Afghanistan restricted Pakistan to 188 in the first innings, Rohail Nazir’s valiant 81 the only positive for Pakistan in a disappointing outing. In response, their bowlers put in a spirited display to reduce Afghanistan to 50/3 before Ali Khil and Rasool steadied the innings.

In fact, Afghanistan’s batsmen seemed a bit nervous initially, with Ibrahim Zadran (3) running himself out after hesitating on a quick single. Rahmanullah Gurbaz (31) hung around with Ali Khil to add 38 for the second wicket before Hasan Khan, the Pakistan captain, had him trapped in front for a 43-ball 31. Shaheen Afridi’s short-ball barrage then accounted for Basir Shah (1), caught behind after attempting a pull.

Ali Khil was joined by Rasool, and at the time, Pakistan seemed on the front foot – the pressure on Afghanistan was high and there was every chance that they would implode. Commendably, Ali Khil and Rasool did not succumb to all the chatter around them, patiently working through the tense period.

Afridi and Mohammad Musa continued their short ball attack, but the batsmen soon worked out the strategy, flicking and guiding them away to the boundaries. With the runs flowing and wickets nowhere in sight, Pakistan became increasingly desperate for a wicket. It eventually came via a part-time bowler, as it so often does – Mohammad Taha had Ali Khil dismissed just four short of a half-century.

Afghanistan didn’t allow that moment to break them though. Instead, Rasool took charge, with Nisar Wahdat first and then Omarzai providing adequate support. Rasool brought up his half-century off 51 balls, and despite Wahdat falling for a 38-ball 19, they weren’t to be stopped. Victory came with 15 balls to spare.

Earlier, Afghanistan were incisive with the ball, electric in the field, and vocal around the stumps. Every effort was cheered by a large group of supporters, and every delivery was high in intensity. Naveen ul-Haq, the captain, led by example – his bowling was tight, but it was his aggression that stood out, and he soon had Pakistan reeling at 23/3. He probed the corridor expertly, inducing nicks off Zaid Alam, who flashed at a wide one and was caught in the slips for a duck, while Ammad Alam fell to an excellent take by wicket-keeper Ali Khil for five.

From there, Rohail and Ali Zaryab Asif led Pakistan’s recovery, putting on 88 for the third wicket. Rohail in particular looked in exceptionally good form and Zaryab offered solid support, with a prominent feature of their stand the running between wickets.

Pakistan were in control as their total crossed 100, but after Zaryab miscued a slog off Wahdat’s part-time off-spin and was caught for 30, a collapse ensued.

Rohail was next to go, four overs after Zaryab’s fall, falling short of what would have been a fine century as he top-edged a sweep off legspinner Qais Ahmed to leg-slip. Qais returned in his next over to bowl Taha before fast bowler Azmatullah Omarzai claimed two scalps in an over, Saad Khan and Mohammad Musa the men to go.

Hasan Khan, the Pakistan captain, and Arshad Iqbal, the last man, nurdled around while Suleman Shafqat blocked heroically as the total inched upwards, but Pakistan were eventually dismissed for less than 200.

It proved far from sufficient.