Afghans no match for Aussie batsmen 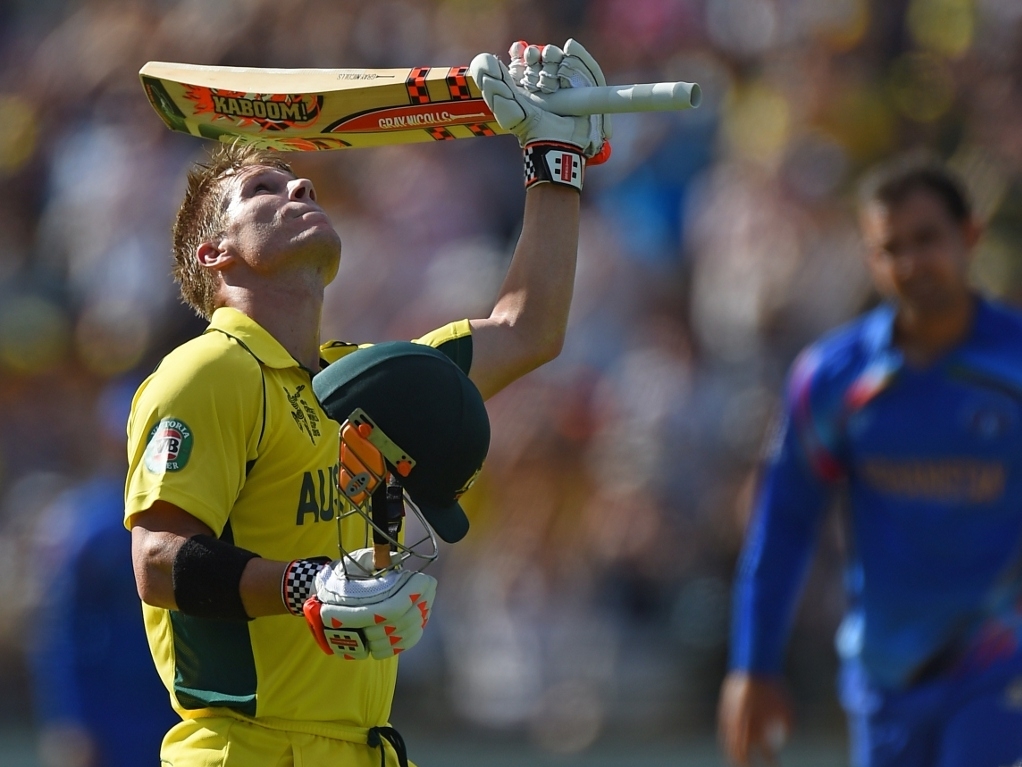 Australia broke a record that had threatened to fall all tournament, as they made 417 for six against Afghanistan on Wednesday, a new World Cup top score, and went on to win by a whopping 275 runs in Perth.

David Warner was the major influence on that total, beating India's previous best of 413 against Bermuda, making 178, while Steve Smith and Glenn Maxwell also hit big half centuries. The Afghans were all out for 142, thus falling to the biggest World Cup defeat by runs.

Afghanistan won the toss and interestingly opted to field, probably hoping their impressive fast bowlers could do a bit of damage. Aaron Finch was an unlucky early victim, out to Dawlat Zadran for just four.

This left Warner and Smith to go to town on the bowling, putting on 260 runs together over the next 35 overs. Warner recorded his ton, off 92 balls, before Smith even reached his fifty, but the promoted number three eventually got there, off 60 balls.

Warner was on track to become the first Aussie to score an ODI double ton, but Shapoor Zadran stopped that plan in its tracks. The paceman pitched it short and Warner got a high top edge, and Mohammad Nabi took the towering catch.

Smith was also denied a milestone by the long-haired paceman, falling for 95. He lobbed it straight to Najibullah at mid off, leaving Glenn Maxwell to demolish the rest of the bowling. James Faulkner did not flourish up the order, bowled by Hamid Hassan for seven.

Maxwell was full of beans though, playing all sorts of odd short, including a reverse sweep off a full toss for six, to race to 88 off just 39 balls. He was denied his century by Dawlat, leaving Brad Haddin to hit a quick 20 and take the score past the old record.

Afghanistan's chase was hampered by the loss of regular wickets, as Josh Hazlewood started the rot by removing Javed Ahmadi for 13. Mitchell Johnson then picked up three wickets in quick succession, including Nawroz Mangal, who had made 33.

Michael Clarke, who had not batted at all, decided to have a bowl and took the dangerous wicket of Samiullah Shenwari, while Maxwell contributed with his spin too, sending Nabi packing for just two.

Mitchell Starc then got in on the act by taking two tail end wickets, but Johnson got the final scalp as the Afghans were all out in the 38th over.