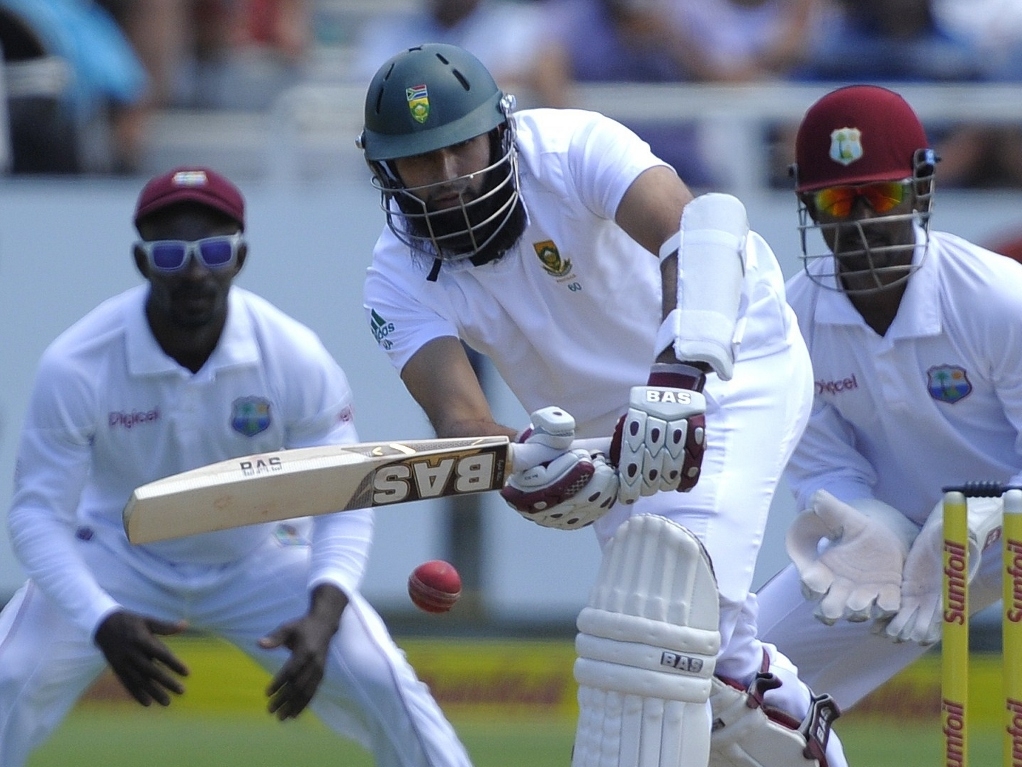 South Africa's batting line up is a magician's trick, where a string of coloured handkerchiefs just keeps coming. Or one of those annoying birthday candles that leave you blue in the face. Or the beer cup snake that’s wrapped around Newlands.

At least, that's what it must have felt like for the West Indies bowlers in Cape Town on Saturday, as they toiled, took three wickets, and were still left with Hashim Amla (55) and AB de Villiers (32) to deal with by stumps on day two.

The Proteas reached the rainy close on 227 for three, with Faf du Plessis and Amla scoring half centuries. The Windies had been dismissed for 329, less than an hour played, as Dale Steyn and Morne Morkel wrapped up the tail with two wickets apiece.

The day began slightly overcast, with the Windies on 276 for six, and the home bowlers hoping to use the overhead conditions to aid their swing efforts and bag the last four wickets without much fanfare.

Steyn obliged just 15 minutes into the day, trapping Jermaine Blackwood plumb in front. The batsman, who had recorded 56, instantly sent it for review but it was a waste, as there was no inside edge to save him.

The Phalaborwa Express struck again two overs later, sending Jason Holder back to the change rooms, before Morkel ended the innings by removing Jerome Taylor and Suleiman Benn with half a session to play.

The Proteas' batting effort started cautiously, with Alviro Petersen, under pressure to get some runs, looking like Bambi on ice. But as the morning went on, he began timing it more sweetly.

Dean Elgar was not as fortunate, and succumbed to Holder on the stroke of lunch. He had faced 30 deliveries for his eight runs when he shuffled across his stumps and was struck on the knee roll.

The hosts thus went to lunch on 48 for one, with Petersen on 26. The Windies bowlers had been wayward, losing their lines and lengths as the sun came out. Of those runs, a whopping 11 were wides. By stumps, that had risen to 12, and eight no-balls to boot.

In the afternoon, Du Plessis joined Petersen and the run rate upped to four an over in the sunshine, the beer snake growing in the stands.

The Proteas had just reached triple figures when the second wicket fell. Petersen, having scored 42 in pain-staking fashion, tried his luck with a quick single and was well short of his ground when Blackwood's throw struck the wickets directly.

It has been two years nearly to the day that Petersen last scored a Test century, a total of  26 innings, and in his past 14 knocks he's only made one fifty, in March last year against Australia.

Du Plessis, master of the marathon innings, brought up his seventh Test fifty in the 40th over, while Amla held steady at the other end. They reached tea on 135 for two, having added 87 runs in the session.

Du Plessis made way for De Villiers in the 50th over, having scored 68 off 122 balls, when he stepped down the track to Benn. The spinner dropped it wider, and a bit of turn took it past the bat and Denesh Ramdin affected an easy stumping.

Amla and AB battened down the hatches as the evening progressed, the clouds coming over again. With Stiaan van Zyl, Temba Bavuma, and even Dale Steyn still to come, the Windies could well hope that the forecast rain for Monday does arrive.