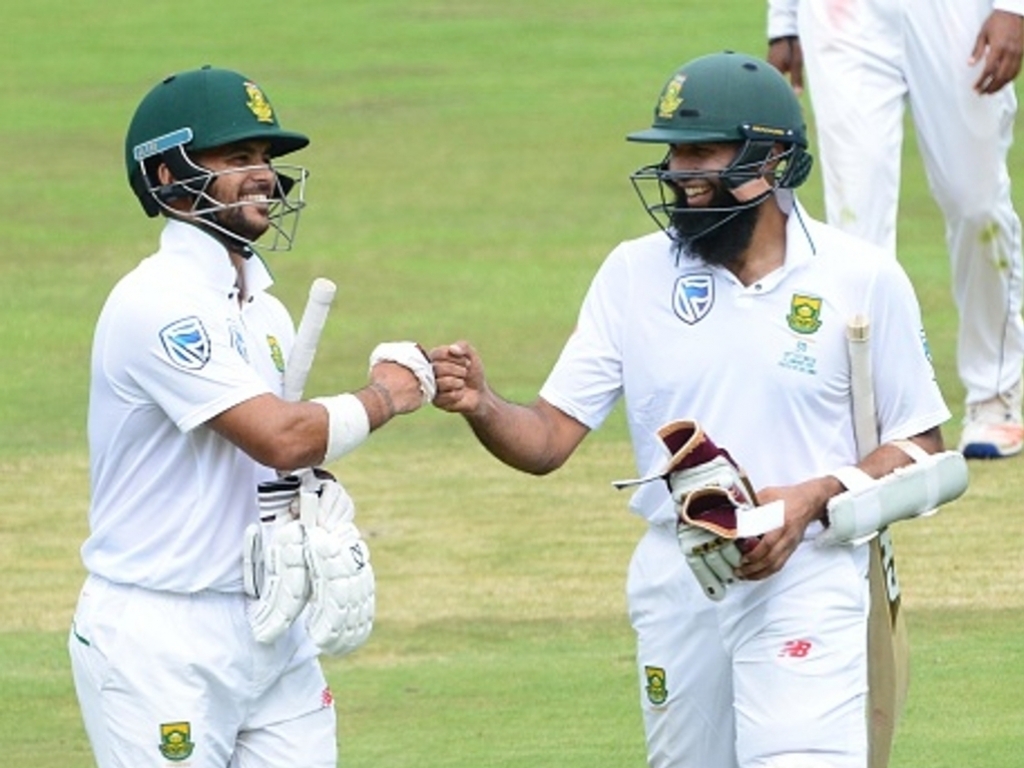 A magnificent 26th hundred during the 100th Test played by Hashim Amla came from a lovely drive down the ground and was the highlight of yet another day of absolute domination over Sri Lanka in this three Test series.

South Africa are 338 for 3 at the close of play on day one of the third Test.

South Africa’s batsmen have laid a good foundation in the final Test, at the Wanderers, in their quest for a series whitewash over their hapless opponents, Sri Lanka. A 292-run third-wicket partnership between Amla and JP Duminy (155) – the real star of the innings so far – has put the hosts in the pound seats and it seems that the only likely obstacle in the way of another comfortable victory is a somewhat gloomy weather forecast on the Highveld.

Faf du Plessis won a toss on a bouncy wicket on a cloudy morning but chose to bat first and continue a strategy that has worked effectively in Port Elizabeth and Cape Town.

South Africa opted for two changes as they left out Kyle Abbott, who is leaving South Africa to play county cricket in England, and spinner Keshav Maharaj. In their places seamer Duanne Olivier was named as a debutant and all-rounder Wayne Parnell helped to make up an all-pace attack. Sri Lanka named an unchanged XI.

When the openers were removed shortly after a change of new ball and South Africa were 45 for two shortly before lunch, Angelo Mathews may have been ambivalent about having lost the toss but after Amla survived a chance very early in his innings, it became a very one-sided day.

While Amla scratched around for runs, which have eluded him of late, Duminy was on supreme form. Amla managed six runs from his first 43 deliveries, while Duminy struck 40 of their first 50 runs together. Duminy’s straight drives down the ground were so very pleasing to the eye – all timing and very little effort – as he seemed to just stroke the ball at will.

An extraordinary statistic emerged from the media centre when JP Duminy brought up his half-century: it was only the second time in his career that he had notched up two 50’s in one series – the last one being in 2008/9. This is truly a remarkable thing from a batsman with six hundreds and eight fifties to his name. Indeed, every time he looks like he may be playing his last every Test match, he comes with the goods.

Having had two good series in a row he no doubt makes the selectors’ job of whom to drop for a returning AB de Villiers that much harder.

The Sri Lankan attack struggled to get their lengths right against the extremely well settled pair of Amla and Duminy on this bouncy surface that is so alien to anything they are used to, especially when the sun came out at lunch and the ball ceased to swing. Only Angelo Mathews (1-25) delivered economical figures as most of his charge conceded over four runs to the over.

Plenty of rain is forecast for the second day but it is not easy to accurately predict rain volumes in Johannesburg, where electrical storm activity is volatile and can be fast-moving.

There are showers expected on day three also but the rest of the Test appears dry. One would expect South Africa to hungrily try force a result, no matter how much rain falls. Sri Lanka will find it hard to motivate themselves to put up a fight given they are 2-0 down and South Africa are unlikely to need to bat more than once.

Nonetheless, a healthy crowd is expected to come out in support of their side and to watch Amla (125 not out) extend his hundred into a big one.