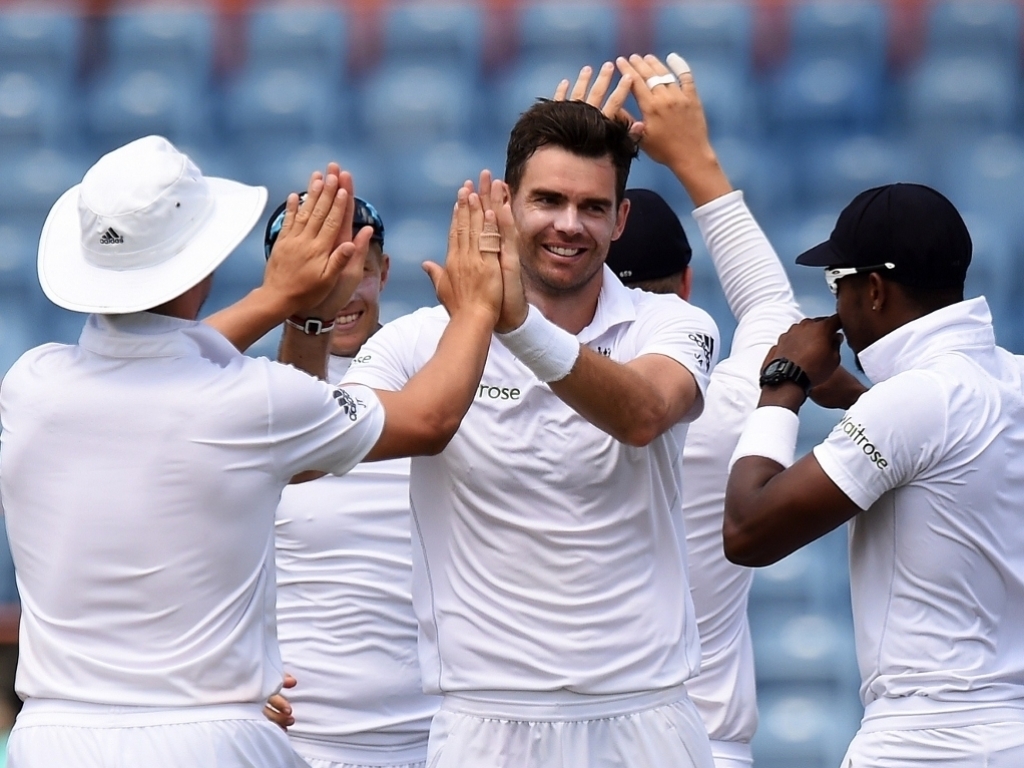 England have broken their away slump and won their first Test abroad since 2013 as they overcame rain, a very flat wicket and some obstinate West Indian batting to achieve victory by nine wickets in Grenada and take an unassailable 1-0 series lead into the final Test in Barbados.

James Anderson undid four days of hard work by the West Indies in just one morning as he was involved in all six of the wickets that saw the home side capitulate from 224 for 2 to 286 for 8 at lunch.

As in the first innings it was the second new ball that did the demolition job as Anderson (4-43) took three quick wickets, held two catches and completed a superb run out.

Moeen Ali (3-51) wrapped up the innings shortly after lunch and a match that had been heading for a certain draw was turned on its head as England put on the pads to chase the meagre target of 143 runs in 60 overs.

Anderson and company deserve full credit for the collapse and the win that ensued but the manner in which the West Indies let themselves down reminded the cricketing world of the Calypso team’s unfortunate vulnerability to collapso.

Anderson is not as quick as he was but he bent his tired back with some extra effort to try extract something out of this benign surface and he was rewarded with the scalps of the overnight batsmen Kraigg Brathwaite (116) and Marlon Samuels (37) and the prized wicket of veteran Shiv Chanderpaul (7). In taking those three match-turning wickets England’s most successful ever bowler conceded only one run.

Jermaine Blackwood (10) and Denesh Ramdin (28) took their side to a lead of 90 with five wickets in hand and suddenly an epic Test match was on our hands with all three results very much alive on the fifth morning.

For the West Indies, surviving overs and taking time out of the game was as important as growing the lead and the volatility in this delicate balance was misjudged by Blackwood, who swiped unnecessarily at Chris Jordan (1-69) and was caught by a sharp Anderson at mid-off.

The ODI skipper, Jason Holder (2), joined Ramdin at the crease but was the victim of a somewhat unfortunate run out as Ramdin crunched a ball in the direction of Gary Ballance, who made a brilliant stop and the ball ricocheted off him towards Anderson, who in turn ran Holder out. One needs a bit of luck to turn a Test match around in the space of minutes and England made the most of it as they began to smell an unlikely victory.

The Windies' tail failed to wag on this occasion as the innings ended on 307 all out from 112 overs – probably 15 overs less than what was required of them. It all happened in a fuzzy blur as a slow match leapt into fast forward.

Once the new ball was taken five overs into the day, no partnership exceeded ten runs. Ramdin was able to bat out some overs with Roach and Bishoo but it was nowhere near enough – his side had left him down already.

England made no mistake in knocking up the required 143 run for victory. Jonathan Trott (0) was the only casualty as he was bowled by Shannon Gabriel in the second over.

The pitch was still excellent for batting and once Cook (59 not out) and Ballance (81 not out) settled down to business the home side’s shoulders dropped as they slid to a painful and so unavoidable defeat. The hard work had been done by Brathwaite and Bravo but the rest of the side just couldn’t follow suit.

Holder injured his ankle while bowling and was carried off on a stretcher but the consensus seemed to be that it was just a ligament strain and he has not been ruled out for the final Test.

Bowling coach Sir Curtley Ambrose had told the media after day three about how important it was for his players to stick to the coaches’ plans, and that he and head coach Phil Simmons could feel that starting to happen.

He drew confidence in this theory from the drawn Antiguan Test and from the good start his side made here in Grenada. He spoke of a resurgence of West Indies Test cricket and they were inspirational words but sadly they now seem premature.

The Windies haven't won a series against a top-six Test side for six years and with Australia visiting after this tour, that statistic looks unlikely to change soon.

It has been a long slog for England as they bounced back from a bruising draw in Antigua and applied themselves to this attritional battle. Man of the match Joe Root was the man who really gave his side a chance as he moved the game forward by batting big at a good scoring rate as he constructed an unbeaten 182 not out in the first innings. It couldn’t have been done without wickets however and Anderson’s match tally of 6 for 100 was every bit as valuable.

Cook’s own form and the longevity of his captaincy were being questioned coming into this match and his 76 and 59 not out will offer him plenty of breathing space, along with the handsome win.

It helped to win a good toss and bowl first on a damp wicket in helpful overhead conditions but he did make that call – many captains would have batted first. The WICB have served up two very flat wickets in this series so far and with the Windies needing a win just to draw the series, it would be refreshing to see a more sporting wicket in Barbados.