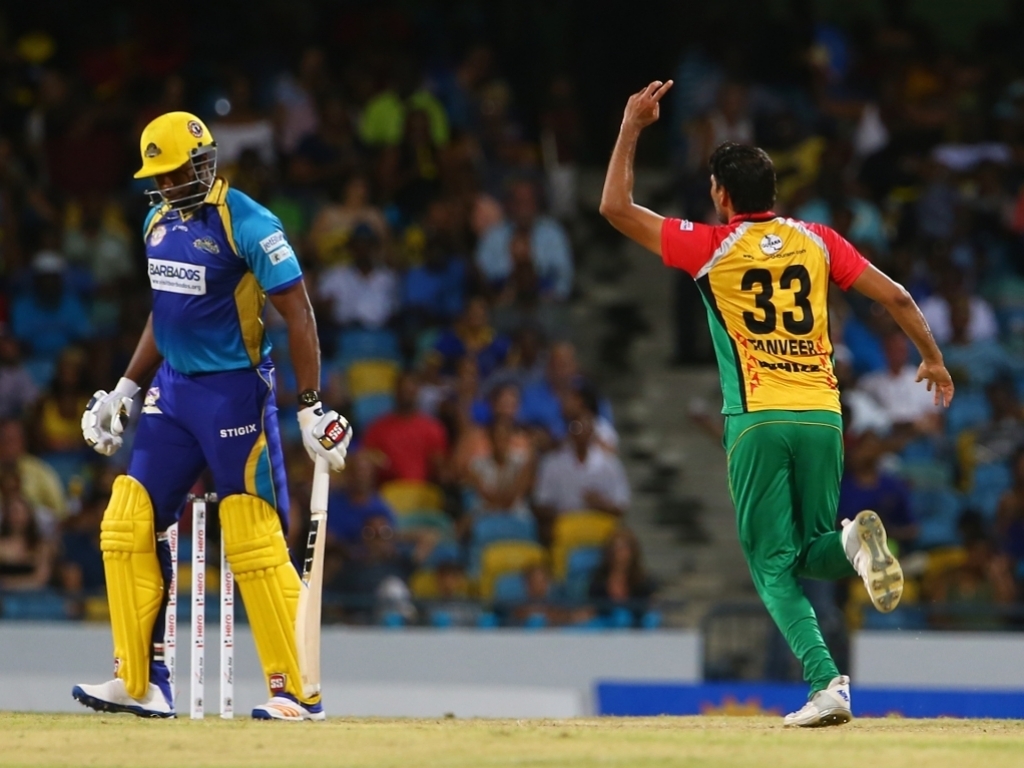 One of the all-time great spells of T20 bowling from Sohail Tanvir propelled the Guyana Amazon Warriors to a huge 99 run victory over Barbados Tridents in Match 25 of the 2017 Caribbean Premier League (CPL).

Defending 159 Tanvir removed Kane Williamson, Dwayne Smith, Eoin Morgan and Kieron Pollard in a scintillating spell of swing bowling which left the Tridents 13-5. They were bowled out for 59 in just 13.4 overs, the second lowest CPL total of all time. Tanvir finished with 5 for 3 – the second-best figures in the history of domestic T20 in the Caribbean.

Bowling from over the wicket, Tanvir immediately found swing across the bat and beat Williamson four times in a row before a thick edge flew to third man. In his next over Smith’s outside edge was found with a delivery similar to those that beat Williamson’s. The Amazon Warriors promoted Akeal Hosein and Imran Khan to three and four. In the fourth over Khan was caught looking to attack Roshon Primus who was bowling from the other end, leaving the score 13-3.

It was in Tanvir’s third over that his spell was transformed from good to great. First he trapped the left-handed Morgan leg before wicket for a first ball duck with a ball that jagged sharply in off the pitch and then the very next ball he induced an edge from Pollard outside off stump. Tanvir couldn’t take a hat-trick but his spell of 3-1-2-4 had gutted the Tridents top-order.

When the players returned following a brief rain delay, the Tridents’ last hope, Nicolas Pooran, picked out long off against Rashid Khan, leaving the Tridents 31 for 6. The Tridents lower order mounted little resistance.  Rashid finished with 3 for 15 from 3.4 overs and Tanvir had time to return and collect his five-wicket haul with his final delivery, finishing with astonishing figures of 4-1-3-5.

Earlier in the evening after being put into bat by the Tridents, the Amazon Warriors started aggressively but found themselves in trouble at 30 for 2 after 3.4 overs with both Tanvir and Chadwick Walton caught in the deep. Luke Ronchi was unperturbed by the early wickets though and blitzed a quick-fire 24 from just 13 balls to take them to 68 for 2 at the end of the Powerplay.

The introduction of spin slowed the Amazon Warriors, who lost Ronchi to the second ball of the seventh over, bowled by a Khan googly and in the eighth over Gajanand Singh also departed as a top-edge sweep off Hosein was caught at point.

After a brief rain delay the Amazon Warriors struggled to get their innings moving with one over of 15 off Pollard a lone bright spot. Otherwise the spin of Khan and Hosein tied them down. Together they took 3 for 38 from their eight overs. Assad Fudadin fell in the 15th over for battling 27 off 28.

The Amazon Warriors finally got moving in the eighteenth over when Ravi Rampaul was taken for 15 by Jason Mohammad who edged two boundaries behind the wicket and nailed a straight six before being caught attempting to hit a second. Two big sixes from Primus off Wahab Riaz in the 19th and a last ball four off Wayne Parnell lifted the Amazon Warriors to 158 for 8.