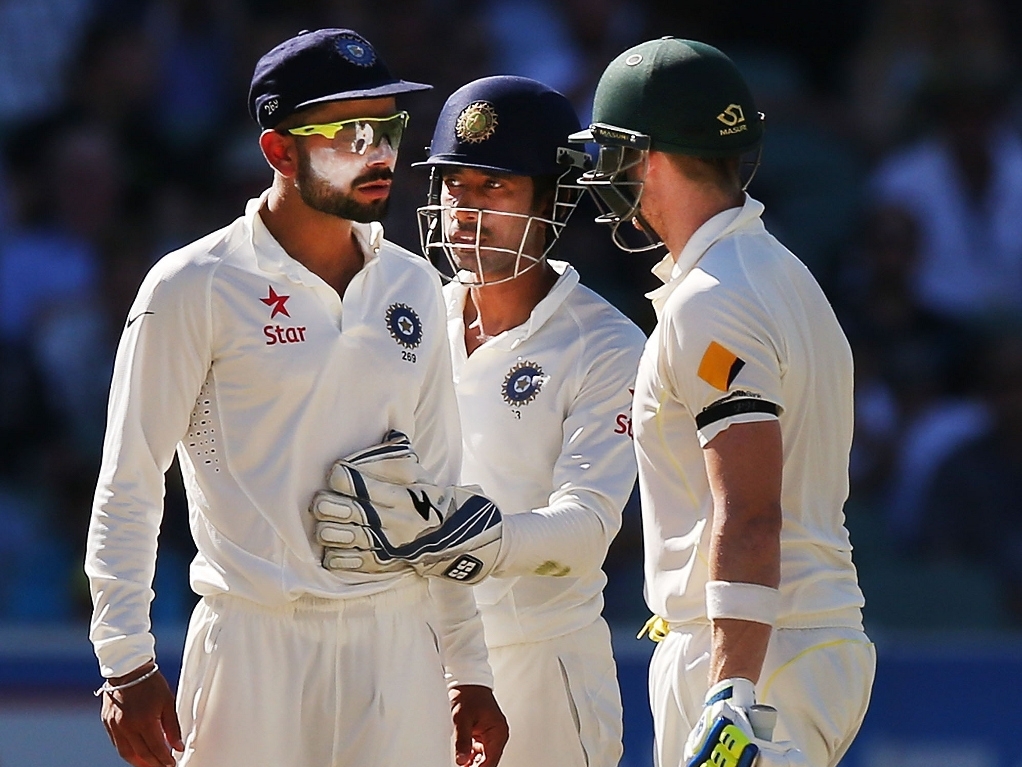 Day four of the first Test between Australia and India lost the feeling of goodwill that had characterised the first three days, as tensions erupted a few times as Australia built a lead of 363 by stumps.

David Warner was the reason for both the slightly aggressive 'banter' as well as the good score, as his century saw the Aussies to 290 for five at the close, having bowled India out for 444 earlier in the day.

Play began with India still batting and five wickets in hand, on 369. They were unable to capitalise on the good base Virat Kohli had provided the day before, with Nathan Lyon's five-fer the main reason for the collapse.

Rohit Sharma was caught and bowled by the spinner for 43, while Wriddhiman Saha added 25 runs to the score before also being bagged by Lyon as well. Ishant Sharma, for a duck, gave Lyon his five.

Peter Siddle, who had been ill the day before, took the other two wickets, bowling Karn Sharma before adding Mohammed Shami to the tally. Shami had made 34 and was the final wicket to fall.

Australia were thus left with a starting lead of 73 runs. Warner and Chris Rogers came out and batted with intent, though Rogers was out for 21 in the 13th over, to Karn Sharma.

Warner batted at a cracking pace, as he had in the first innings where he scored a ton as well. His century on Friday made him the first batsman to score two tons in the same Test at this ground since 1990, when Dean Jones did it.

There was come conflict though, as Warner was bowled by Varun Aaron soon after reaching his half ton. He was given an aggressive send-off by the bowler, only for a no-ball to be discovered and Warner came back with a few words of his own.

Kohli and the umpires had to step in when Shikhar Dhawan and Shane Watson became involved too. Things calmed down after that, with Watson departing for 33 and Michael Clarke for seven.

Warner was out for 102 in the evening, leaving Steve Smith and Mitchell Marsh to push the score as they looked for a declarable total. Smith and Kohli had a few words as well, with the umpires stepping in again.

Marsh's intent was clear from the get-go, as he scored 40 off just 25 balls. He got 24 runs in one over, but he was caught in the deep while trying to go for one more big hit. Smith had advanced to 52 not out at stumps.