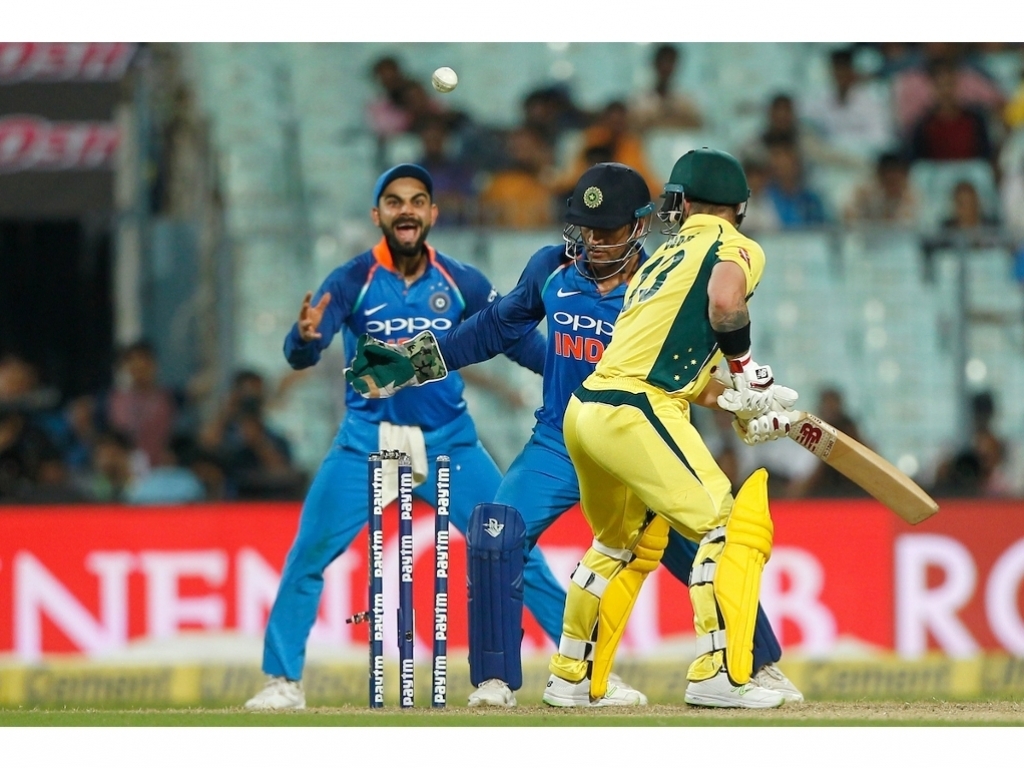 Australia could not chase down India’s total of 252 all out as a Kuldeep Yadav hat-trick tore through the lower order to set up a 50 run win in the second ODI in Kolkata.

India won the toss and elected to bat and though Australia’s quicks bowled well up front they got off to a great start.

Rohit Sharma (7) was nipped out early by Nathan Coulter-Nile who has been in excellent form but Ajinkya Rahane and Virat Kohli laid a great foundation.

Rahane looked at ease on a difficult pitch and looked nailed on for a hundred until he was run out for 55 with a despairing dive leaving him inches from making his ground.

Australia struggled in the heat of Kolkata with wicketkeeper Matthew Wade being physically ill on the field.

Kohli recorded an incredible 11th ODI fifty this year in his 20th innings.

Manish Pandey (3) failed again missing a straight one from Ashton Agar to leave India reeling on 131/3.

Kane Richardson (3/55) and Coulter-Nile (3/51) were the pick of Australia’s bowlers with the former bowling when a bizarre exchange preceded a rain break in the 48th over.

Hardik Pandya (20) was caught off a no-ball and believing himself to be out wandered out of his crease, Australia attempted a run out leaving the on-field umpires confused but ultimately, in accordance with the laws, the ball was called dead and the players left the field.

Richardson bagged a few scalps in the closing overs as India lost their final wicket off the final ball of the fifty.

Australia’s reply got off to a rocky start as Hilton Cartwright departed for a second successive score of 1 as he and David Warner (1) fell victim to Bhuvneshwar Kumar early on.

Steve Smith would steady the ship and become only the fifth Australian to score a fifty in his 100th ODI but when he lost partners Travis Head (39) and Glenn Maxwell (14), who struck successive sixes but couldn’t go the distance, the task began to look beyond the tourists.

Smith (59) was well caught by substitute fielder Ravindra Jadeja on the fence off the bowling of Yuzvendra Chahal in the 30th over and Australia were staring down the barrel at 138 for 5.

Marcus Stoinis tried to repeat his debut heroics with the tail but fell well short losing Wade (2), Agar (0) and Pat Cummins (0) to a Kuldeep hat-trick.

Kuldeep is only the third India bowler to achieve an ODI hat-trick and the first since Kapil Dev’s effort in 1991, before the left-arm wrist spinner was born.

Stoinis brought up a well-deserved fighting fifty in style with a huge six off Hardik.

Kumar returned to wrap things up getting Richardson (0) and leaving Stoinis high and dry on 62 not out.