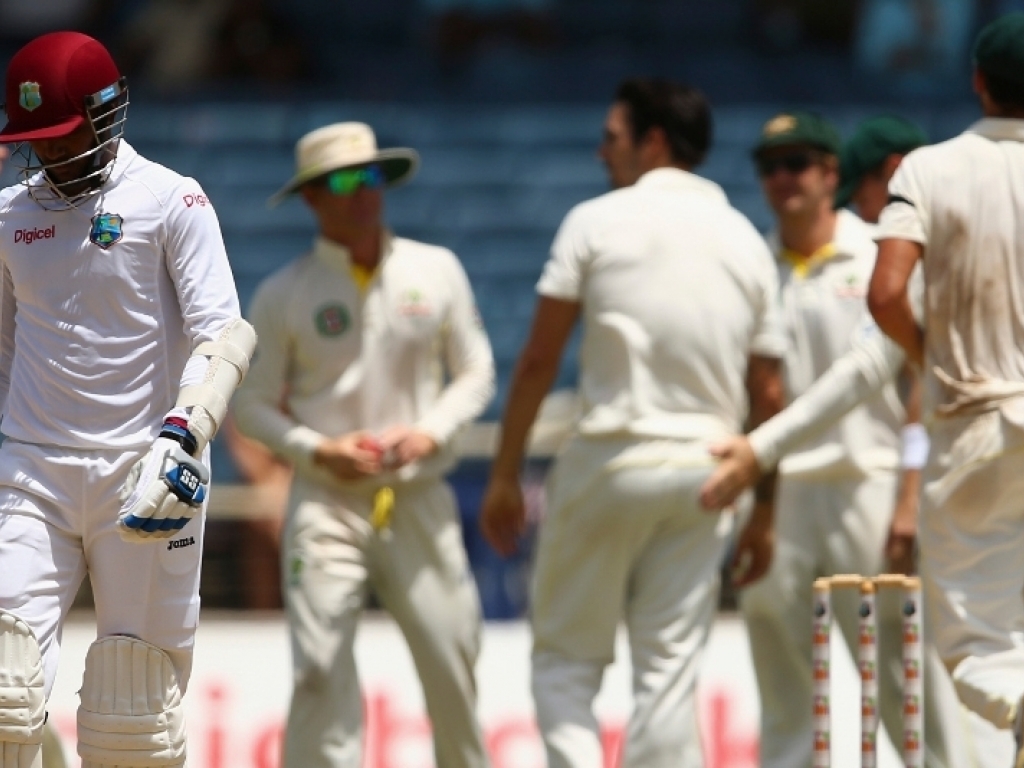 It  no longer holds true that the West Indies are inconsistent because in recent years they have been so very consistent in being below par, and despite moments of brilliance they have won a maximum of one Test match every year for several years. There are glimmers of hope and promise and then the usual all too common slump into unprofessional mediocrity ensues.

Australia look ready for the Ashes after completing a clinical 2-0 series sweep that saw them retain the Frank Worrell trophy over a young and inexperienced West Indies side. Australia will move closer to South Africa at the top of the world rankings and the Windies slide further away from the pack, many rankings points behind the top-seven Test teams.

The 277-run demolition job was painful to watch. So many people have watching cricket in the Caribbean near the top of their bucket lists but there was little cheer for spectators in Kingston, Jamaica, this week. Even the 300 Australian fans that travelled up to 20 000 kilometres to get here might feel short changed by the emphatic trouncing. Many of that touring party booked their tickets before the series was preponed (not a real word but common in BCCI press releases) by two days so as to allow for some extra time prepare for the Ashes. Flying around the Caribbean is tricky at best so many of the group arrived in Dominica on day three as originally scheduled. The Test match ended that day and they didn’t get much more bang for their buck in Jamaica.

The Windies began the fourth day on 16 for two after a punch declaration of 212 for two from Michael Clarke set the home side 392 in over two days. Clarke wasn't so much dangling a carrot as wanting to ensure the match would be over in four days and his confidence was not tested as the hosts crumbled just a few overs after lunch. 200 all out in the first innings was followed by 114 all out in the second. In the first Test they managed 148 and 216. Australia are jolly good but one begins to understand the drop in Test cricket interest in the region when you repeatedly drive the ground excited and leave it feeling disappointed.

Steve Smith's 199 and 54 not out gave the batsman the man of the match award, and earned him a 500 USD cheque that was presented by a cool cat from the Jamaica Tourist Board. It is a good thing that that entity relies more on hot beaches and cool people than cricket for revenue because you would have to really love cricket to fly across the world to watch this team in action.

That said, Jerome Taylor's six for 47 in the first innings was an inspired piece of bowling. What this side would do for a few more players with Taylors ability and work ethic. Davendra Bishoo sadly missed the match after hurting his spinning finger in the first Test but his own six wicket haul in the first innings in Dominica was every bit as good to watch. For the batsmen however there was very little to smile about as only one partnership, 150-odd between Dowrich and Samuels in the first Test, could be regarded as the kind of effort that is expected of a Test side.

Dropping Chiv Chanderpaul was always a bold move and the selectors felt they had to stick to their guns despite being forced through injury into three changes for the Jamaica Test. Guyanese opener Chandrika joined an infamous list of 40 Test cricketers to get a pair of ducks on debut. Marlon Samuels sat the match out with a purported eye problem but I would rather have had a one-eyed Samuels than yet another nervous youngster whose closest he got to hitting the ball was to edge it, twice.

The West Indies cricket board has a lot more questions than answers and might look to make some changes before their team plays series against Sri Lanka, Zimbabwe and then Australia down under. Getting players like Dwayne Bravo, Kieron Pollard and even Chris Gayle into the side would be one way to shake things up. Giving the captaincy to the impressive young Jason Holder might be another now that Dinesh Ramdin has completed an unremarkable year with the reins.

The disparate and disorganised board is in trouble both on and off the field and under mountains of debt after pulling out of an India tour last year drastic action is required but it is unlikely very much more than than the same old shoddy bureaucracy is likely.