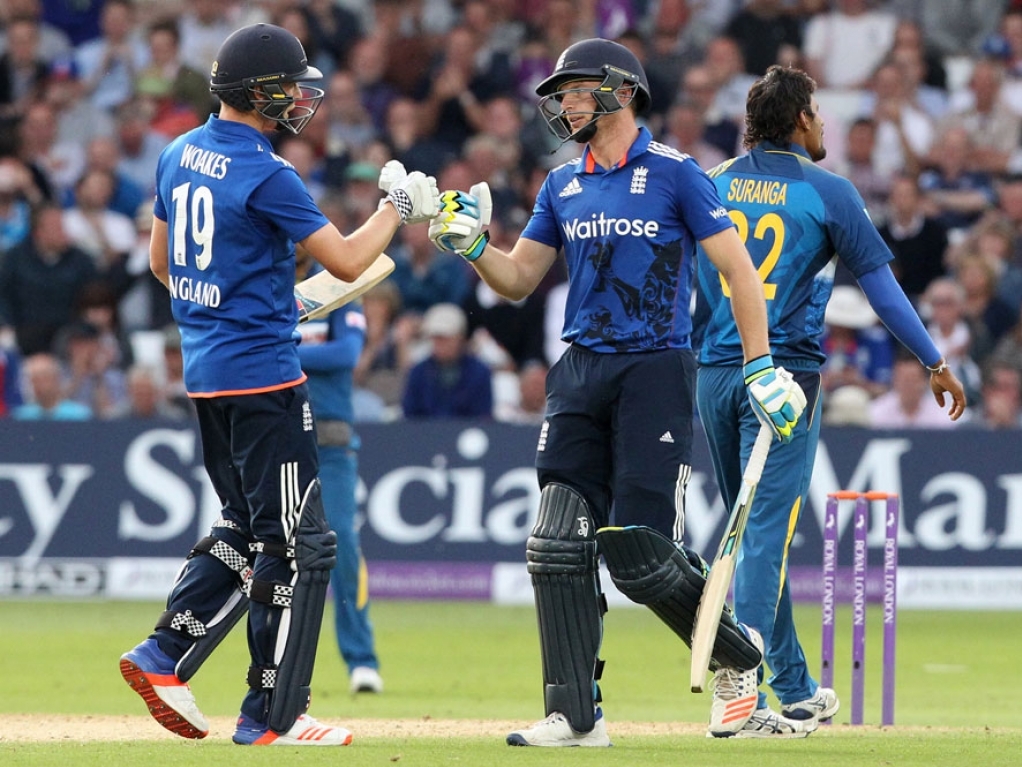 England captain Eoin Morgan's decision to bowl first after triumphing at the toss saw the Sri Lankans reach an iffy final total of 286 for nine. The tally proved marginally inadequate, though, as the reply reached a deadlocked 286 for eight.

Fast bowler Sri Lanka displayed plenty of steel with three yorkers across the opening four deliveries of the final over of an entertaining humdinger, but then coughed up some poor width and length to allow Woakes a three through the leg-side and the swashbuckling Liam Plunkett a big, booming six over long-off.

Skipper Angelo Mathews' commanding 73 and Seekkuge Prasanna's complementary 59 spearheaded the visitors' stint at the crease. Prasanna, who almost scored the quickest ODI century by a Sri Lankan against Ireland last week, was particularly aggressive. He faced just 29 balls and wielded a quartet of sixes, three off spinner Moeen Ali.

Leg-spinner Adil Rashid, despite not taking a wicket, was the pick of the English bowlers. His 10 overs allowed just 36 runs. Seamers Woakes, Plunkett and, meanwhile, snared two wickets each – and Ali one.

England's response met very early trouble, collapsing to 82 for six inside 18 overs. Openers Jason Roy and Alex Hales and the in-form Joe Root and Jonny Bairstow shared only a dozen runs. Morgan offered some resistance with a standalone 43.

Buttler and Woakes promptly convened for a redemptive 138-run alliance for the seventh wicket. The former was on the brink of a fine ton, only for a superb catch from fielder Dasun Shanka to prevent graduation to three figures. The right-handed Woakes remained unperturbed despite the loss of the more experienced – and found brief support in Willey and ample in Plunkett.

Man of the Match Woakes' 95 not out set the record for the highest ODI innings by a number nine batsman, surpassing the unbeaten 92 registered by West Indian Andre Russell against India at North Sound in 2011.

The result afforded the tourists an early lead in the five-match series. The second match will get underway in Birmingham on Friday. Bristol, London and Cardiff will host ODIs three, four and five respectively. A one-off Twenty20 International in Southampton will follow. Mathews sustained a hamstring injury on Tuesday – and is in doubt for the Friday's fixture.