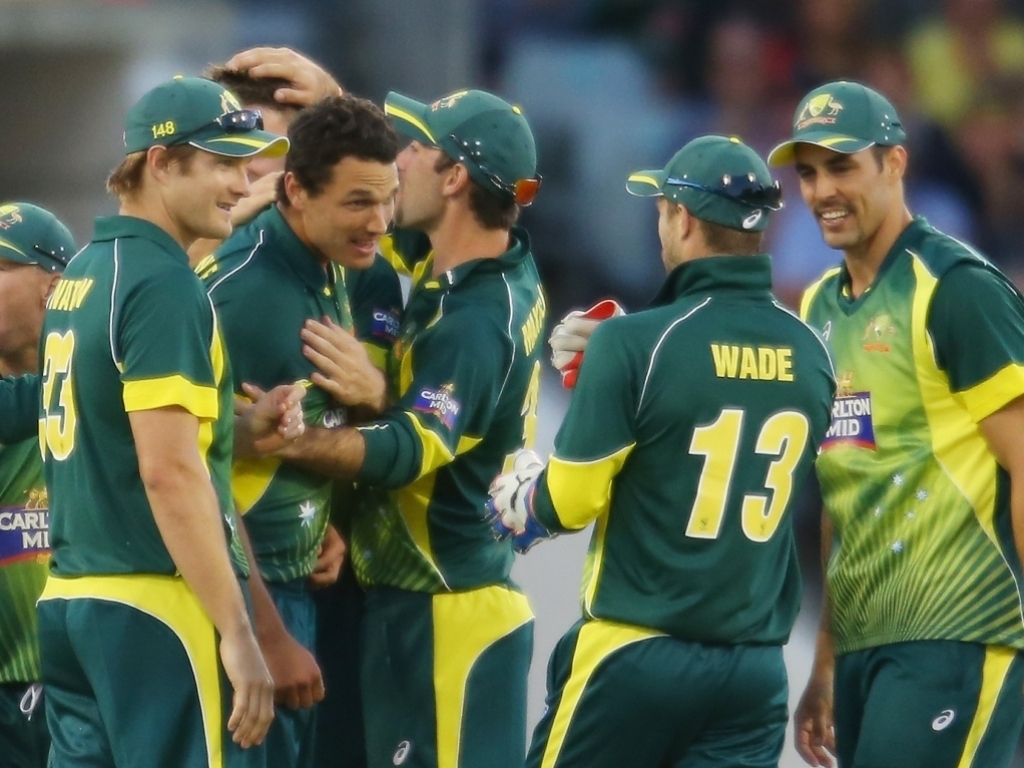 Australia won the first One Day International (ODI) of the series against South Africa by 32 runs in Perth on Friday.

After the Aussies scored 300 for eight in their 50 overs having been asked to bat first, the home side secured a commanding victory at the WACA following a glut of late wickets in the Proteas chase, with four wickets fell during the batting Power Play for just 17 runs after the visitors were arguably in a winning position.

From 202 for four with 15 overs remaining, the Proteas fell to 222 for nine in the space of five disastrous overs to hand the Aussies the match.

Last pair Imran Tahir and Morne Morkel added 46 for the last wicket to add a bit more respectability to the total, but by then the proverbial fat lady had already sung her tune, as the South Africans were dismissed for 268.

The Proteas made a fairly poor start to their chase, as both openers Quinton de Kock and Hashim Amla were caught behind by Matthew Wade from the bowling of Mitchell Johnson for single figure scores.

De Kock (two) was the first to go when he played loosely outside the off-stump and could only get a thin edge in Johnson's second over, while Amla (eight) tried a cute late cut in Johnson's next over but could only glove it behind after misjudging the length of the delivery slightly.

Number three Faf du Plessis was joined by Farhaan Behardien at the wicket, who was added to the squad following the injury to JP Duminy during the final T20 match between the same opponents on Sunday, and promoted to number four.

The score went from 18 for two to 53 for three when Behardien's vigil came to an end when he was caught for 20 by Aaron Finch on the mid-wicket fence from the bowling of Nathan Coulter-Nile.

Du Plessis was then joined by De Villiers, but could only add 23 for the fourth wicket with the Proteas skipper before he too was dismissed, for 31, caught on the fine-leg fence by Mitchell Marsh off the bowling of Shane Watson.

With the score on 76 for four, De Villiers was joined by under-pressure David Miller, with 34 overs left in the visitors' innings.
Together they added 122 for the fifth wicket in 21 overs to bring South Africa right back in the game after the loss of those four early wickets.

At the advent of the batting Power Play at the 35 over mark, however, the Proteas chase was dealt a couple of decisive blows in quick succession.

Miller was the first to lose his wicket – caught by Marsh at mid-off from the bowling of Coulter-Nile for a well-played 65, which included one glorious straight six and five fours.

In strode Ryan McLaren, but his innings lasted only two deliveries when he was out in the same Coulter-Nile over without scoring, caught by Wade from the glove upon review after he was originally given not out.

In the next over, Vernon Philander was dismissed for one by Josh Hazlewood – also caught behind – after he too was given not out initially but after stand-in captain Bailey – who was leading the side in the absence of the injured Michael Clarke, who injured his hamstring during his innings – called for the review.

Replays showed that Philander got a thin edge that was picked up by Snicko.

Disaster then struck in the final Power Play over when De Villiers was run out for 80 after a misunderstanding with new batsman Steyn with the score on 218 for eight.

Steyn (six) too fell soon after – also caught by Wade in what was Coulter-Nile's fourth wicket on the night.

Last man Tahir was out for 22, with Morkel stranded at the other end on the same score.

Earlier, the Aussies posted a score of 300 for the loss of eight wickets in their allotted 50 overs, with a knock of 70 by Bailey the highlight.

Openers David Warner and Finch got the Aussies off to a rollicking start after Proteas skipper De Villiers asked the home side to bat first.

Warner and Finch added 94 for the first wicket inside 15 overs before they were both dismissed in the same Vernon Philander over, caught by McLaren for 46 and by De Kock for 35, respectively.

Their dismissals had brought stalwarts Shane Watson and captain Michael Clarke to the wicket, at numbers three and four, which coincided with a stark drop in the run-rate.

Clarke was the next to go, gloving a Dale Steyn bouncer down the leg-side, where he was snaffled by De Kock for 11, which brought Bailey to the wicket.

Watson didn't last much longer and fell for 13 when he tried to hit Tahir out of the ground but only managed to get a top-edge to his sweep shot and was caught by Morne Morkel at fine-leg inside the circle.

New batsman Marsh came and went- bowled Philander for 10 – and Bailey was joined at the wicket by stand-in wicketkeeper Wade, who was included in the side following the shoulder injury Brad Haddin sustained during the recent tour of the United Arab Emirates.

At that stage, the Aussies had crashed to 144 for five in the 30th over, however, several dropped catch and missed run-out chances – off the Bailey's bat in particular – took the gloss off the Proteas fight-back somewhat.

Together they added 92 for the sixth wicket before South Africa finally snaffled Bailey's wicket, with Du Plessis holding on to a difficult catch in the deep from a Dale Steyn delivery.

In strode Glenn Maxwell, who was kept down the order in order to maximise his potential in the final overs, but he was soon joined by Johnson after Wade succumbed to Philander – his fourth victim of the day – when the ‘keeper was caught by substitute fielder Rilee Rossouw in the deep for a well-played 35.

Rossouw was on the field after Behardien injured appeared to injure himself in one of the failed catches off the bat of Bailey, falling awkwardly on his shoulder as the ball spilt from his hands.

At this stage, though, Maxwell started to illustrate some of the extraordinary shots in his locker and by the time Morkel got his wicket – caught in the deep by Du Plessis for a quick-fire 29 off 19 deliveries – the damage had already been done.

A few hefty blows from Johnson (13 not out) and Coulter-Nile (nine not out) in the last two overs then saw the Aussies to a challenging total of exactly 300, 104 of which came in the last 10 overs.