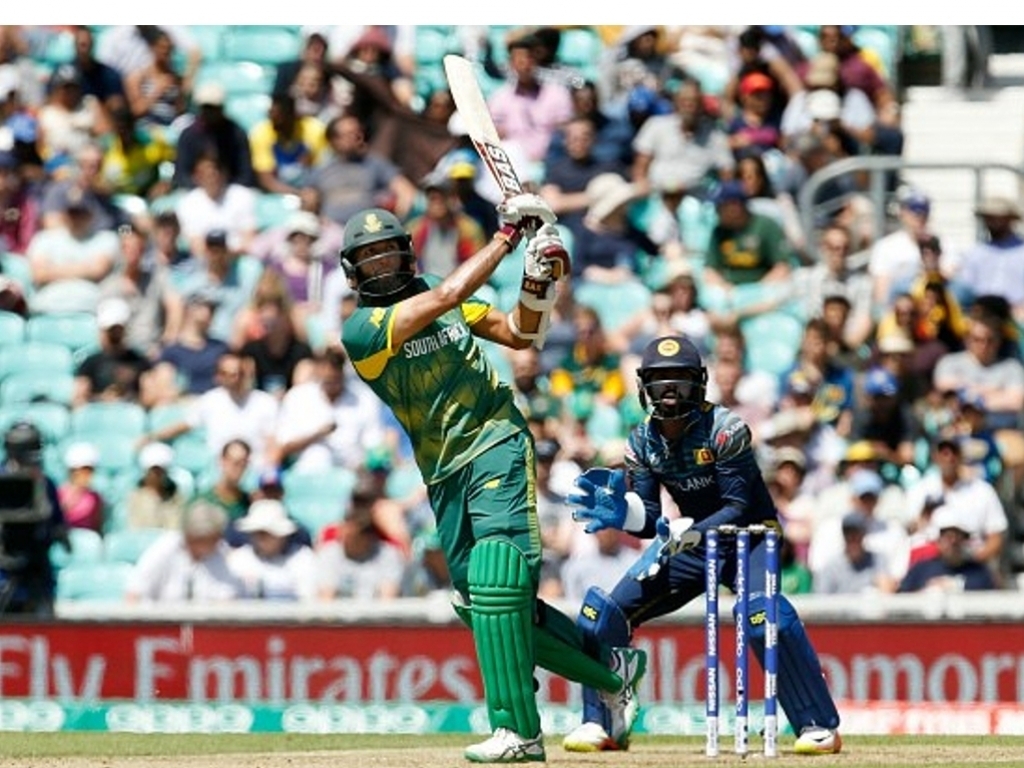 Hashim Amla (103 off 115 balls) has been in hugely improved form of late and his well measured hundred at the Oval helped secure a comfortable victory for South Africa in their opening ICC Champions Trophy clash today.

The Proteas won by 96 runs after they notched up 299 for six and then bowled out the opposition for 203.

The margin of victory may have been considerable but by no means does it tell the full story as South Africa were well under the cosh when the Sri Lankan openers raced to 69 without loss after eight overs, before the team in dark blue fell like ninepins.

Upal Tharanga earlier won the toss and chose to bowl on a day that what mostly sunny and a pitch that started out decidedly on the slow side.

Amla and Quinton de Kock (23 off 42) initially struggled to get the ball off the square. In an uncharacteristic beginning to the innings, they managed only 32 runs in the first 10 over Powerplay and did not strike a boundary until the seventh over.

De Kock never really did manage to get going and after he nicked off, Amla was joined by a very determined Faf du Plessis (75 off 70).

Du Plessis survived an easy catch chance at fine leg off Lasith Malinga when he had just eight runs to his name. It was Malinga’s first ODI for his side since 2005 and he was shoddy in the field and had lost a couple of yards of pace but he still bowled with some guile and accuracy and probably did enough to keep his place in the team.

The partnership between Amla and du Plessis threatened to take the game away from the Sri Lankans as they consolidated and then attacked.

A combined effort of 149 from just over 21 overs was the result and the effort took them to 189 for one in the 34th over.

Indeed, a score well in excess of 300 looked very likely and considering the fact that the white ball hasn’t swung an iota during this tournament so far, they might have felt they needed it.

After Amla was run out just after becoming the quickest ODI batsman ever to 25 centuries, South Africa lost their way. They would manage only 110 runs over the rest of the innings, and just 78 off the final ten overs, as they stuttered along in fits and starts.

JP Duminy (38 not out off 20 balls) played a chaotic knock at the end that at least set Sri Lanka a target of a run a ball.

Nuwan Pradeep (2-54) was the pick of the bowlers but Suranga Lankmal (1-51) also deserves a mention for keeping it tidy. All in all, Sri Lanka fielded well.

In reply captain Tharanga (57 off 69) and Niroshan Dickwella (41 off 33) made it look easy. The wicket was now playing a bit more quickly under the lovely sunshine and Dickwella in particular cashed in.

AB de Villiers was reluctant to modify his strategy upfront as he persevered with Kagiso Rabada (1-46) and Wayne Parnell (0-54) for a full nine overs before he considered a bowling change.

As soon as Morne Morkel (1-31) was tossed the ball to take over from Rabada, he had Dickwella caught in the deep. He had been only able to ride his luck for so long. Kusal Mendis (11 off 10) is an equally aggressive batsman but after a couple of fancy boundaries, he too holed out.

It was then the turn of Imran Tahir (4-27) to steal the show on a wicket that began to aid the wrist spinner a little bit.

He had Dinesh Chandimal (12 off 21) in a spot of bother after he was not able to time a ball and the mix up that ensued resulted in a tidy run out by de Villiers.

Sri Lanka lacked the backbone to put up any meaningful resistance and Tahir went on to run through the batting order. To add to his four keenly celebrated wickets, the Pakistan-born leggy has a runout to his credit on the scorecard thanks to a direct hit!

It had been a much-enjoyed day of cricket at the Oval – the full house seemed to be in fairly equal parts South African, Sri Lankan and neutral and the weather played ball.

The win will likely now make South Africa favourites in their group but it certainly isn’t an easy one – tomorrow the two other sides in the group meet in Birmingham, India and Pakistan. This tournament certainly doesn’t give one much time to reflect on things.