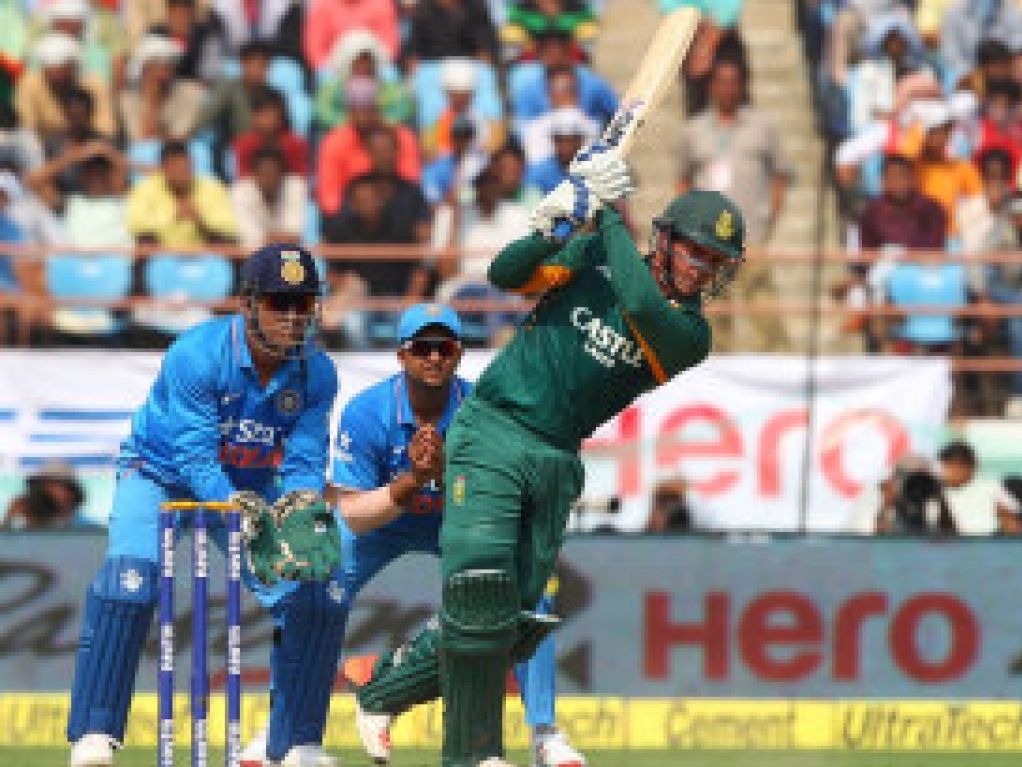 Quinton De Kock enjoyed a return to form with the bat, scoring 103, while Morne Morkel took four wickets as South Africa beat India by 18 runs in the third ODI in Rajkot to take a two-one lead in the five-match series.

India had looked well set to chase a target of 271 but a determined effort of four economical wickets by man-of-the-match Morne Morkel proved too much for the home side.

Proteas captain AB de Villiers won a good toss on a ground that is reputedly very high scoring and in a highly surprising move the off-form David Miller was given an opportunity to find some runs on the good surface at the top of the order as he was sent in to open with De Kock.

The experiment had looked to work as the lefthanders put together a tidy stand of 72 before Miller (33) was beaten by Harbhajan's off-spin to pop up an easy catch when looking to beat the ball over cover.

Hashim Amla (5) didn't seem to relish the alien role of not opening and was stumped before he could get going while runs dried up as Harbhajan (one for  38), Amit Mishra (one for 41) and then Axar Patel (one for 51) troubled the visitors on a pitch where even the spinners were expected to struggle.

Faf du Plessis (60) has enjoyed a sequence of solid contributions this tour and while he failed again to convert it into a big score, he and De Kock did weather a storm and then accelerate impressively to compile 118 runs from 20 overs for the third wicket.

At 200 for two after 38 overs the Proteas would have been eyeing 300 on a pitch that was slowing up but when du Plessis, De Kock and De Villiers (4) were out in the space of five runs the game suddenly wore a very different complexion.

De Kock's gritty knock was hampered by cramp as he ticked the score over and approached his hundred – he and Du Plessis were clearly drained by the hot sun and the run-rate evaporated.

JP Duminy (14) didn't last long as he holed out at long-on off Mohit Sharma (two for 68) and at 241 for six, Farhaan Behardien (33*) had run out of recognised batsmen for partners and was forced to play somewhat within himself.

Dale Steyn (12) played a little cameo with Behardien, who seems to have really come of age this tour, as the pair helped South Africa to a solid score on a pitch where strokeplay became increasingly difficult.

In reply, India appeared comfortable as they waltzed to 100 for one in around 20 overs. Rohit Sharma (65) and Virat Kohli (77) each looked comfortable at the crease and when Sharma was caught and bowled by Duminy then Kohli was joined in the middle by Dhoni (47) who again looked happy to have a bat in his hands.

But the chase was almost a mirror image of the second ODI where the chasing side, this time India, appeared to have the match under control at 190 for two after 40 overs when the fielding side starved the batsmen for runs and the pressure of a fast-rising asking rate was quickly translated into a collapse of four for 22.

Most of the damage was done by Morkel (four for 39) but credit must go also to Duminy and Tahir for their spin-induced squeeze and to Kagiso Rabada (none for 39) for his economical figures of under four runs to the over.

The pitch had slowed appreciably in each innings and batsmen struggled to get the ball away as it softened with time in a third consecutive classic ODI.

It is not clear whether the lower-than-expected scores are due to new rules that permit more fielders to be outside of the circle, particularly in the final ten overs of an innings, but the matches have made for some tense old fashioned one-day cricket.

The pressure is certainly back on India with two matches to play, in Chennai and Mumbai. These are two extremely closely matched sides and the Chidambaram and Wankhede stadiums make for fittingly epic stages for these final bouts before the Test series.