Dismal RCB slump to another defeat 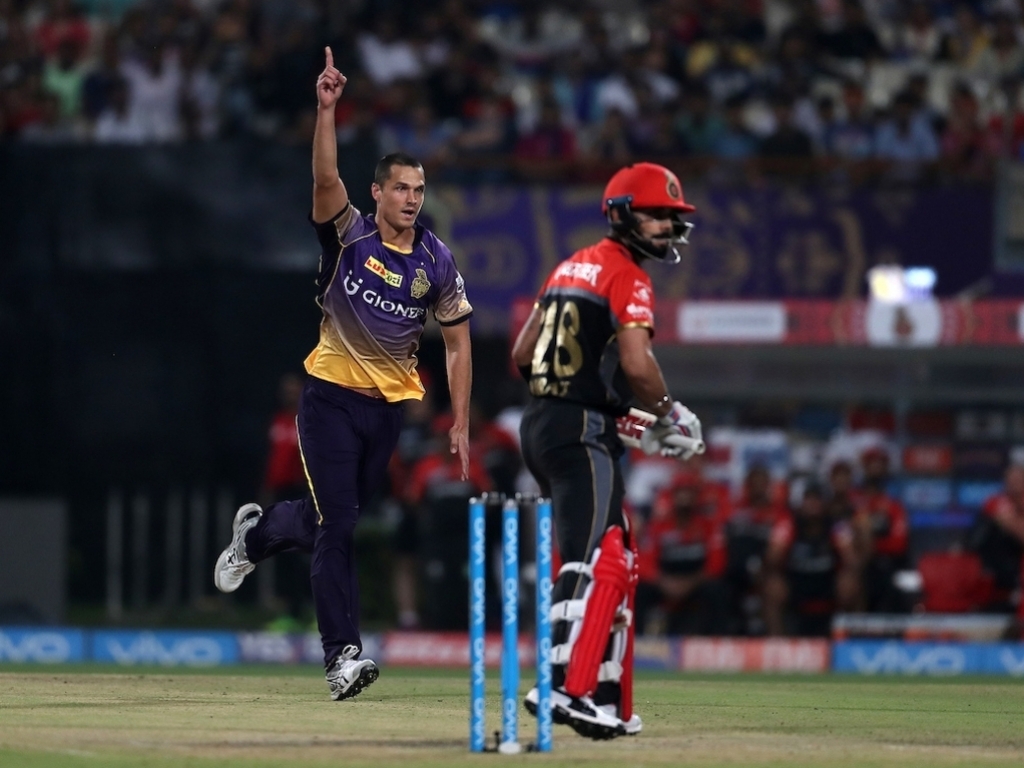 The Royal Challengers Bangalore slumped to yet another defeat going down by 82 runs against the Kolkata Knight Riders at Eden Gardens.

The pre-tournament favourites have achieved just two wins in seven games and crumbled in a heap chasing a modest target of 132.

KKR had been bowled out for 131 with Sunil Narine’s 34 off 17 balls opening the batting being the only 20 score in what looked like a poor effort at the time.

Narine is proving to be so very valuable for KKR https://t.co/FAiBMIkOQB #VIVOIPL via @ipl

The pitch proved difficult to bat on and wickets fell at regular intervals with Gautam Gambhir (14) the first to go nicking off to Tymal Mills in the fourth over.

English allrounder Chris Woakes chipped in with an ultimately vital 18 off 21 balls.

Not to be outdone RCB were bowled out for 49, the lowest ever total in an IPL match with not a single man in the XI able to break into double figures.

KKR’s overseas seam trio of Nathan Coulter-Nile (3/21), Woakes (3/6) and Colin de Grandhomme (3/4) each picked up three wickets in what can only be called a catastrophic performance from an RCB team loaded with batting power.

Only Chris Gayle faced more than ten balls in an innings that took just 9.4 overs to complete.

Coulter-Nile was named man of the match for his ferocious opening spell that cut open the RCB top order and allowed the other quicks to complete the rout.

“After the kind of half that we had, we thought we could capitalise and chase it down. Reckless batting. I can’t say anything at the moment. It was that bad. This is just not acceptable.

“The sightscreen is very small here, one guy got up as the bowler was loading up, that distracted me. Still it wasn’t a big deal. That was just one down. Nine guys could have done the job. There’s nothing to review anything about the second half, it was that bad.

“We need to forget it and move forward. We’re a much better team. We got 200 plus in the last game. I’m sure everyone realises what they’ve done wrong.

“You have to come out, show intent and back yourselves. I’m sure we won’t bat like that again in the tournament. After the start they got, the spinners did well.

“Restricting to 130 was a good effort. We’re going back home for a couple of games. We’ve got back-to-back games, need to try and win those to get some momentum.”

“Not a lot of teams have pace like we have. Got three guys who can bowl over 140. The plan was to hit the deck hard and the plan worked. We didn’t bat well at all. After where we were in the first six, we should’ve got 170.

“We need to pull up our socks in the batting department. If you want to win the tournament, you need to bring your A game out in all departments. It was moving around, so I thought there was no point in using spin.

“The bowling department was very professional, I’ve not seen as impressive an effort from the bowling attack like I did today. The plan to the bowlers was simple ‘ just use your pace and show to the world what you’ve got.’

“A lot of opponents think we’re a chasing side. So if we win batting first, it gives us a lot of confidence.”