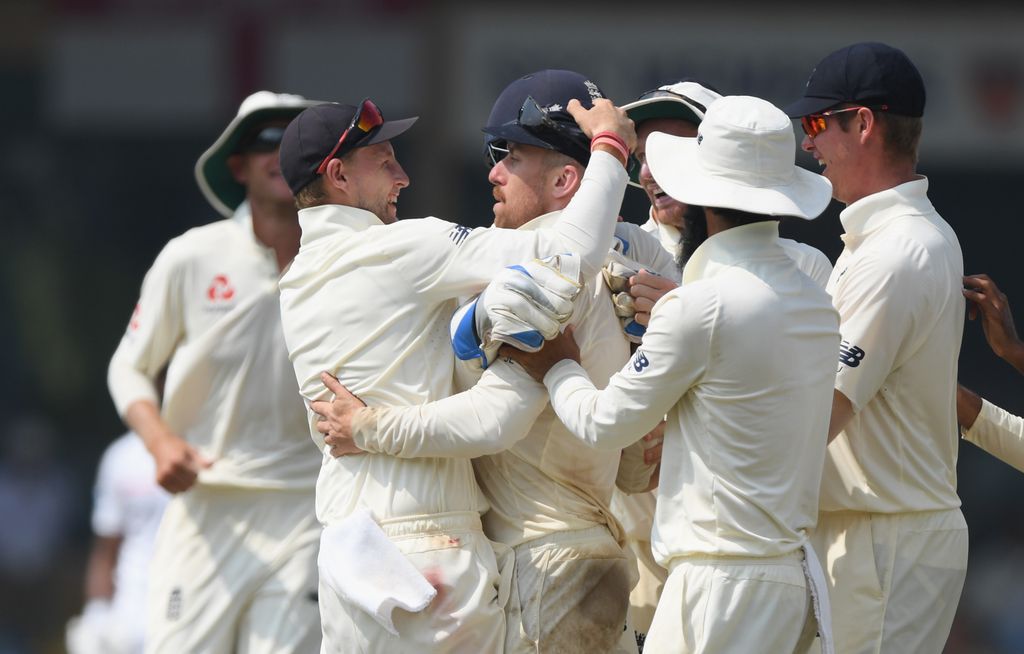 England were made to work hard in the Colombo heat before wrapping up a 3-0 win in a three-match away series in 55 years as they beat Sri Lanka by 42 runs at the Sinhalese Sports Club (SSC) on Monday.

The visitors’ left-arm spinner Jack Leach was responsible for the champagne moment of the day when he ran out Kusal Mendis for a brilliant 86, after England only managed one wicket in the morning session.

Leach took 4-72 and off-spinner Moeen Ali 4-92 and, although England struggled to find the right length for most of the day, the result was never in doubt after the run out as Sri Lanka lost wickets regularly throughout the afternoon.

Ali and Leach also finished as England’s leading wicket-takers for the series, with 18 scalps each.

Dilruwan Perera lead the stats for the series with 22, but along with leg-spinner Adil Rashid who took 12 in the series, England’s three-man spin attack has accounted for 48 of the 60 wickets taken on this tour, a tremendous return.

England have never won so convincingly on the subcontinent, and their record away from home in recent years makes a whitewash here a magnificent achievement.

Many observers have come forward in the past couple of days to point out that this Sri Lanka side is potentially one of the weakest they have fielded in their Test history.

Whilst they are clearly weaker than England’s previous visits here, there can be no doubt that Joe Root is now leading a team with exciting prospects.

Batsmen with all the shots in the book, capable it seems of playing in all conditions, and a spin bowling trio that has been accurate and clever in the way they have contained the home side.

With the World Cup and the Ashes both being part of England’s summer in 2019, they can now be confident that they have all the key ingredients to conquer in both formats.

Sri Lanka had looked beaten on the third afternoon. Few were expecting England to take too long to take the six wickets they required for victory and wrap up an unlikely whitewash.

The Barmy Army began the day with a minute’s silence for a supporter who passed away earlier in the tour, joined by some of the England players and staff.

Barmy army showing respect before today’s play for the England supporter who passed away in Kandy earlier in the week. #SLvENG ⁦@TheBarmyArmy⁩ ⁦@englandcricket⁩ ⁦@cricketpod⁩ pic.twitter.com/kGJXf2k2s2

Ali and Leach started proceedings for England, on a pitch who’s cracks had started to widen and was finally beginning to show signs o breaking up.

Mendis and nightwatchman Lakshan Sandakan saw out the first half hour of play, Mendis jumping on anything short of length as he enjoyed some poor early deliveries to race into the forties in no time.

Sandakan, who had lasted 41 balls for his 7, eventually fell to a classic Leach-to-a-right-hander dismissal when he edged one to Ben Stokes at slip to leave Sri Lanka 82-5, still 245 runs short of their target.

Rashid was brought on for Moeen to try to find some magic out of the wearing pitch, but he too struggled to find his correct line and length, and Mendis was able to pass fifty largely untroubled, off just 55 balls.

The tourists were perhaps guilty of expecting this game to simply end by turning up this morning, and as a result Sri Lanka survived through until morning drinks, 111-5.

Mendis continued to cruise even when seamer Stokes was brought on for some short pitched fast bowling, and he and Roshen Silva quickly put on fifty in just 79 balls, as the runs required dropped below 200 and England looked like they may have to wait some time before celebrating.

England’s frustration became clear, and Stokes’ short bowling attack became rather too much when one of his bouncers flew straight over wicketkeeper Ben Foakes’ head to the boundary for 5 no-balls for bowling more than his allotted head height deliveries for the over.

Mendis and Silva, however, continued to cruise through until the lunch break, and at the interval they had lifted Sri Lanka to 164 for 5, still needing another 162 runs to win.

The partnership was now worth 82 at a fraction under four an over, and was suddenly bringing Sri Lanka into within sight of winning the match.

Such was the topsy-turvy nature of this series, one last twist in the tale would surprise no one, and as Sri Lanka scored 111 for just one wicket lost in the morning session, England supporters, muted by the home side’s grit and determination, were nervous.

The afternoon session continued in the same vein; England’s three spinners being rotated, but without any major threat being poised.

Leach thought he had caught Mendis’ outside edge on 84, and despite none behind the stumps appealing, England reviewed out of desperation.

Replays showed the ball missed both bat and pad on the way through to the keeper, and England were now a review down.

The hundred partnership came up shortly after between Mendis and Silva, shortly after the runs required dipped below 150. Hope had turned into confidence for the home team now, and there was genuine belief that they could pull off something truly remarkable.

Sri Lanka have managed to shoot themselves in the foot at key points throughout this series. The huge turning point of the day came in the form of a suicidal run out, and an unlikely hero in Leach.

Silva had turned the ball to square leg, ran one and turned to come back for an unlikely second. Leach was the fielder, who picked up with his right hand (remarkable considering he is a slow-left-arm spinner), and from forty metres out was able to find the direct hit that had Mendis a foot short at the non-strikers end. 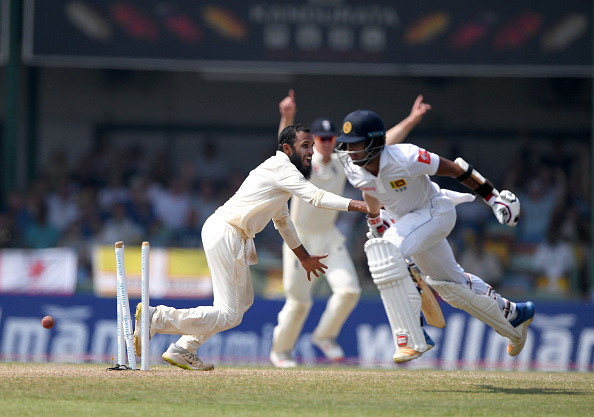 England finally had the breakthrough; Mendis’ 86 marked yet another chance for Sri Lanka’s first century of the series ruled out needlessly.

The hosts were 184/6 and, in what had become a tight contest again, England pushed their noses back in front.

Silva moved to his fifth Test half-century shortly after, and much depended on the thirty-year-old right hander, who had been joined by wicketkeeper Niroshan Dickwella.

The feisty left-hander did play some big shots to get to 19 at a run a ball before Leach took England’s seventh wicket when Dickwella brushed one onto his pad, and up to Keaton Jennings for yet another catch at short-leg.

England were in sight when Dilruwan Perera came out to join Silva, but shortly after he too succumbed to England’s new fielding star.

This time it was Moeen who found some extra bounce turning towards Perera’s pads, and Sri Lanka’s number nine could only clip one into his hip to give Jennings and easy catch diving forward.

Sri Lanka now 225/8, and England had one eye on a well earned day off before flying home.

Silva’s resistance was brought to an end by another overturned decision from umpire Ravi, when Moeen correctly judged that the ball had flicked the pad first before hitting the bat, and when he went LBW for 65, the end was nigh.

Sri Lanka’s final pair of Suranga Lakmal and Malinda Pushpakumara decided to go on all out attack, to ensure, one way or another, the game would be over quickly.

They played some glorious attacking strokes and swung their way to an amazing fifty partnership in just thirty-three minutes, in ten manic overs.

England were forced to take the new ball, not something they thought possible when the pair came together with 101 still required for victory.

As the tension grew, Stuart Broad was brought on for the first time in the day, and immediately hit Pushpakumara on the head in a moment that made the ground stop.

The ball wasn’t especially short, and as Sri Lanka’s wrist-spinner ducked he turned away from the delivery which meant the ball hit him flush on the back of the head.

He bravely decided to play on, and despite the tea interval being pushed back by half an hour because of the match expecting to end within that time, Sri Lanka’s last stand survived and were remarkably 284/9 at break – only 43 short of their target.

The twenty minutes break did more harm than good to Sri Lanka; in the fourth ball after tea, Leach ended the resistance, as Lakmal was trapped in front, and DRS this time upheld the on-field decision.

England had finally won another fantastic Test match, by 42 runs. Leach and Moeen finished with four wickets each, and Sri Lanka were bowled out for 284.

Pushpakumara finished a remarkable 42 not out off just 40 balls, and you have to admire the refusal of Sri Lanka to lie down at the end of what has been a very disappointing series for the hosts.

Jonny Bairstow was named man-of-the-match for his first innings century, and Foakes man-of-the-series.

Both players earned those awards in unfamiliar positions; England have some decision to make going into the West Indies, but they are definitely headaches you would like to have as a international side.

The tourists can travel home having completed the task they set out for in all formats of the game.

A thoroughly satisfying winter tour that has seen them uncover some new players, a new style, and a new found confidence to take into a huge 2019 for English cricket.