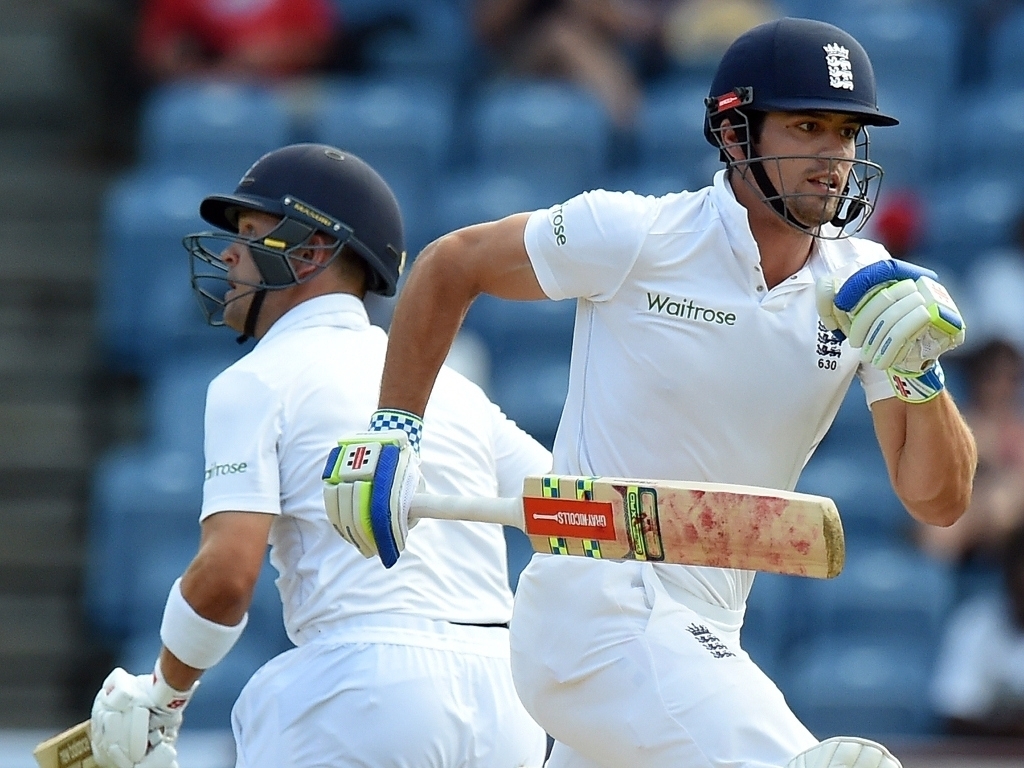 England have not won a Test match away since India 2012 and they once again find themselves in a position from which they will be hopeful of victory but may struggle in a race against time on yet another flat pitch.

At stumps on another shortened day England are 74 without loss after the West Indies managed a handy 299 all out. Alastair Cook and Jonathan Trott had both reached the 30s.

Fewer than eight overs could be bowled in the first session, which was scheduled to start early in an attempt to make up some of the 20 overs lost on day one. Despite this being the driest season of the year, with April receiving an average of one third of the rainfall of most other months, low cloud and a microclimate that often involves a shower every few hours make for better conditions for banana and mango farmers than for Test cricketers.

After the heavy roller ironed out any creases and divots from day one, the pitch was even flatter than before and whilst still slow, the ball came onto the bat much better than on the first morning.

Marlon Samuels cheekily brought up his hundred off the new ball as he guided James Anderson in the air past gully for four. Two balls later, with a rash stroke that showed his high levels of anger, ego and determination to club the English attack that so got on his nerves into oblivion, he swiped viciously at Anderson and was caught by Ian Bell at slip.

Samuels is the side’s best batsman but his talent fights against his poor discipline and he batted like he had a point to prove after he let his team down in Antigua. He did a superb job here in the first innings with a patient and gutsy century but you get the feeling that no matter what he scores, he should have made more.

After some scathing comments about the opposition that included “these English boys don’t learn" at the after-play press conference on day one, Anderson could not hide his glee in dismissing him and shook his fist triumphantly in the batsman’s face.

The new ball continued to wreak havoc as Stuart Broad picked up Ramdin (31), Holder (22) and Roach (1) in quick succession and the Windies stumbled to 247 for nine midway through the afternoon session. Broad (4-61) kept his critics at bay with a fine spell of probing line and length as he showed far more aggression than before.

Before those quick wickets it had been a frustratingly painful and slow day with no action to speak of and while there would be no wicket for another 11 overs as newcomers to the side and last pair Davendra Bishoo (30) and Shannon Gabriel (20 not out) frustrated England as much as the rain had done in the morning as they put on a surprising 52 runs for the last wicket.

It was by and large a chanceless partnership as Bishoo struck his best Test total and Gabriel bettered his highest ever first class score. Their effort might well turn out to be a result-defining one as they took their side to almost 300, which is perhaps like 350 on a wicket and outfield that is so very slow.

Perhaps fired up by his cameo with the bat, Gabriel came out all guns blazing with the ball as he hurtled it down at 93 miles per hour, easily the fastest we have seen in this series, but both his and Roach’s accuracy was less impressive as the England openers Cook (37 not out) and Trott (32 not out) were able to soon relax on this good wicket.

They were able to completely disguise the fact that they are each enduring a rotten run of form as they notched up their first ever 50-run opening stand. It must be said they survived some edges and Cook was half-dropped by Smith at slip when in his 20s, but nonetheless it is England's highest opening stand since the ill-fated Ashes of 2013/14.

Cook surpassed Alec Stewart and is now only a little over four hundred runs behind Graham Gooch at the top of the England Test career runs list. It was a perfect opportunity to bat away the potentially career ending hoodoo and bloodthirsty press pack.

If England continue to bat at three runs to the over and there is no rain on day three, then they could have a first-innings lead by the end of the day. Once again a quarter of an hour early start is scheduled. It is attritional Test cricket but this continues to be a fascinating Test series as these two sides feel out each others' weaknesses.