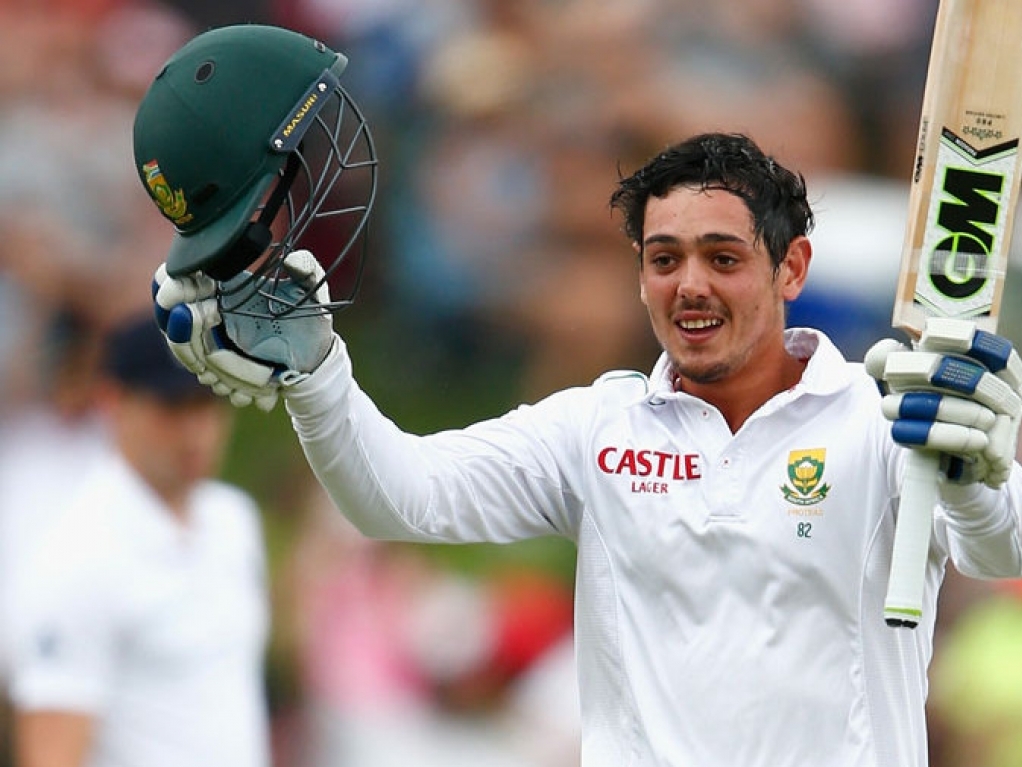 Alastair Cook made sure England got off to a solid start in reply to South Africa's first innings total of 475 inspired by Quinton de Kock's maiden Test century, the visitors reaching 138 for two at stumps on day two of the fourth Test in Centurion.

De Kock made a run-a-ball tally of 129 not out as he notched up the third century of South Africa's innings and gave his side the large total they wanted.

The 23 year-old De Kock's century came at his home ground and couldn't have been more timeous for a player who has struggled to cement his place in the side.

His display was gutsy and attractive and through considerable partnerships with patient tail-enders like Kyle Abbott (16) and Dane Piedt (19), he saw South Africa from a precarious 273 for five to the relative safety of a 450-plus effort.

It is hard to say whether the Proteas' good showing with the bat was mainly a result of the easy surface or good batting or poor bowling but it was plain for all to see that the English bowlers, who have already done their job in winning the series, were not exactly putting their backs into it.

The visitors' fielding wasn't exactly up to scratch either as each of the home side's centurions were dropped, at least once, before they had brought up their half-centuries.

It was a blazing hot day in the sun and the English camp would have felt hugely relieved when Morne Morkel was out LBW to Ben Stokes ( four for 86) to wrap up the innings, and they were able to retreat to their cool and shady dressing room.

Cook (67 not out) may have captained England to a famous series win but he has not done himself proud with the bat during the first three Tests, where he managed only 103 runs from six innings.

If some on the English side are indeed less hungry to perform in this dead rubber than usual, then Cook is clearly not one of them.

The opener looked as determined as ever, batting as if his life depended on it, during the first three hours of England's riposte.

Alex Hales (15) was out meekly to hosts' best bowler, Kagiso Rabada (two for 55)), and will need to seriously impress the selectors in the second innings if he is to have a chance of holding onto his spot in the starting XI.

The pitch had been playing as well as the national highway that runs past the venue until Nick Compton (19) found himself on the receiving end of a ball that shot straight and very low from Rabada and had the resolute number-three trapped in front.

Inconsistent bounce is a familiar trend at Centurion towards the business end of Test matches but to see a ball that kept that low on only the second day might well mean that South Africa won a very big toss.

Batting fourth at this ground could be challenging once some of the cracks are opened up further by the hot sun. There is a lot of cricket left to be played in a 'dead rubber' that is anything but what it's name implies.

A near-full house was given a good day's entertainment as they cooked meat on the braai and drank countless pints of the sponsor's product at 80 pence a pint.

Entrepreneurial hawkers made a killing selling sun cream and an enterprising company launched a smart-phone application where spectators can order beer directly to their seats.

Suffice to say that less than half the crowd had the stamina to last the full 90 overs. A draw is the most likely outcome in this fourth and final Test but it is far too soon to be confident about any of the three outcomes.

It has the all the makings of a five-day humdinger.