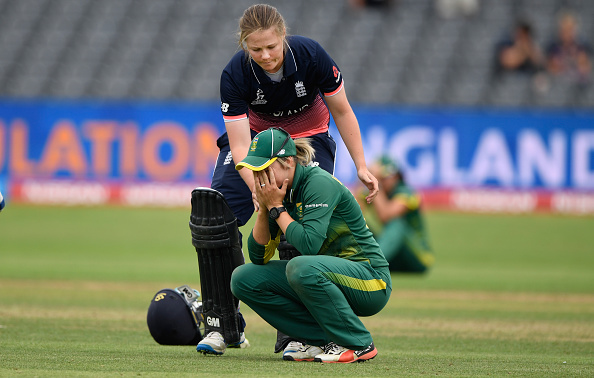 England progressed to the Women’s World Cup final, but only just, after sneaking past South Africa by two wickets with two balls to spare in Bristol on Tuesday.

Having posted a sub-par total of 218/6 in their 50 overs, the Proteas women fought bravely with ball in hand until the the very end, with England needing three runs from the final over.

Shabnim Ismail bowled the last over and got the wicket of Laura Marsh to send flutters through the home crowd but Anya Shrubsole smacked a precious boundary with two needed from three balls to send England to Lord’s where they will face Australia or India.

Ealier the home team looked to be coasting to victory as Sarah Taylor (54) and her captain Heather Knight (30) put on 78 for the third wicket but at 139/2 Proteas skipper Dane van Niekerk produced a moment of magic to run out Taylor.

It was just the pick me up moment South Africa needed as another three wickets fell in quick succession, including that of Knight, as the Proteas started to believe again.

But England are powerhouses in women’s cricket and showed it as vital knocks from Fran Wilson (30) and Jenny Gunn (27 not out) down the order ultimately saw the team over the line.

Earlier, the Proteas fell short of a substantial target after England put on the squeeze and never let their grip go.

Laura Wolvaardt, the 18-year-old Proteas opening batter, continued to show why she has a big future in the game with 66 at the top of the order while former skipper Mignon du Preez showed all her class and poise as she constructed an unbetean 76.