India give Afghanistan their first examination 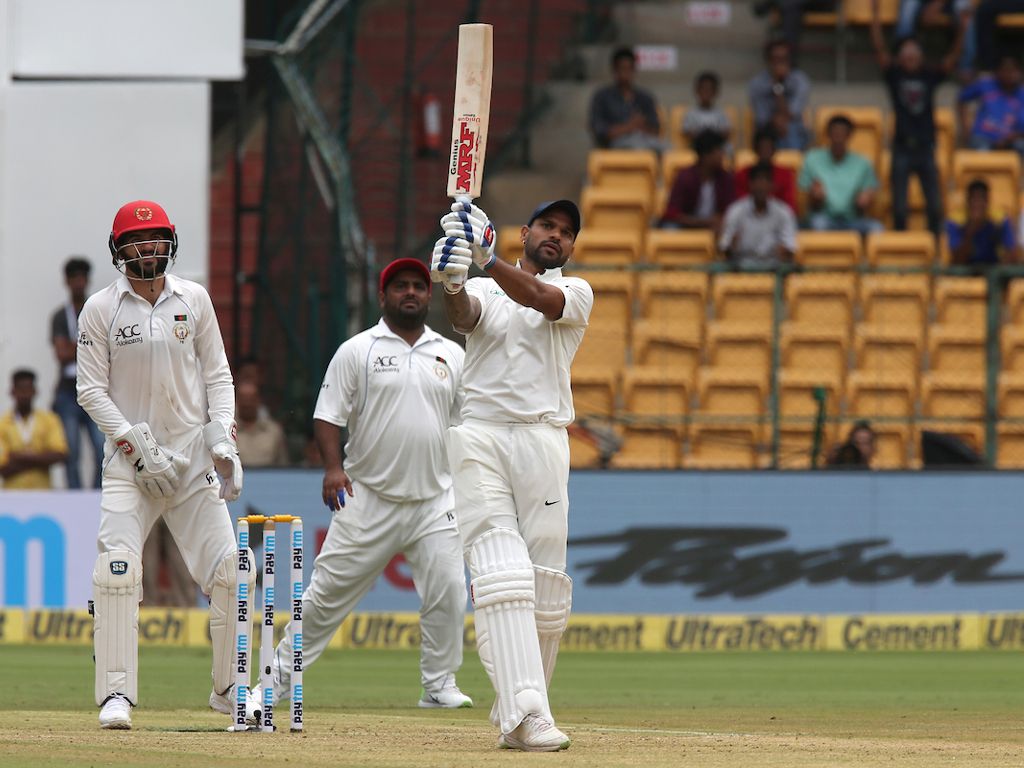 Afghanistan have enjoyed a string of dream white ball performances but they were given a tough introduction to the game’s ultimate format on day one of their inaugural Test against India at the Chinnaswamy stadium in Bangalore.

Stand-in India skipper Ajinkya Rahane won the toss and elected to bat first despite the threat of rain hanging over the ground.

Right out of the gate Shikhar Dhawan got after the Afghan bowling blazing his way to a century before lunch with India ending the first session 158 without loss.

Dhawan’s reign of terror was ended by Afghanistan seamer Yamin Ahmadzai who sent down a fullish length ball that wasn’t really there for the left-hander to drive s he did, edging into the corden where Rahmat Shah parried the ball to Mohammad Nabi.

The lift that wicket gave was short lived as Murali Vijay and Lokesh Rahul hunkered down before and after the rain took a chunk out of the afternoon’s play.

It wasn’t until after the second rain delay into the third session that Vijay finally brought up his hundred.

The spark for something of a late rally from Afghanistan came in the shape of an eighteen-year-old known simply as Wafadar, one of the stars of their under-19s dream run at the World Cup in New Zealand earlier this year. Wafadar produced a ball that moved late and thudded into Vijay’s pads and Chris Gaffaney’s finger went up to leave India 280 for 2 and send the opener back with 105 to his name.

In the very next over Ahmadzai had his second of the day as Rahul (54) chopped on and suddenly at 284 for 3 the tourists had a foothold in the game though the hosts will feel reasonably confident in their supremacy at the end of the day.

Rashid Khan had endured a torrid introduction to bowling in Test cricket as his Sunrisers Hyderabad teammate of last month Dhawan turned into his tormentor, but the spinner produced a top delivery that skidded onto Rahane (10) trapping the India skipper leg before.

Nabi had given Cheteshwar Pujara (35) a life of Rashid soon after but the allrounder stationed at first slip made no mistake in the next over when Mujeeb Ur Rahman induced and edge from the same batsman to see India slip to 328 for 5.

That became 334 for 6 as substitute fielder Nasir Jamal swooped to run out Dinesh Karthik (4) who found himself halfway down the pitch with partner Hardik Pandya persistently and vocally rejecting the run.

What appeared to be a yawning gulf in class between the two sides up front closed as the day wore on but the volume of runs acquired in the first half of the day still left India on top with the knowledge that Afghanistan will have to bat last.

India would end the day on 347 for 6 after 78 overs but the slip from 280 for 1 will give the hosts some pause for thought and leaves Pandya (10) and Ravichandran Ashwin (7*) with some work to do.