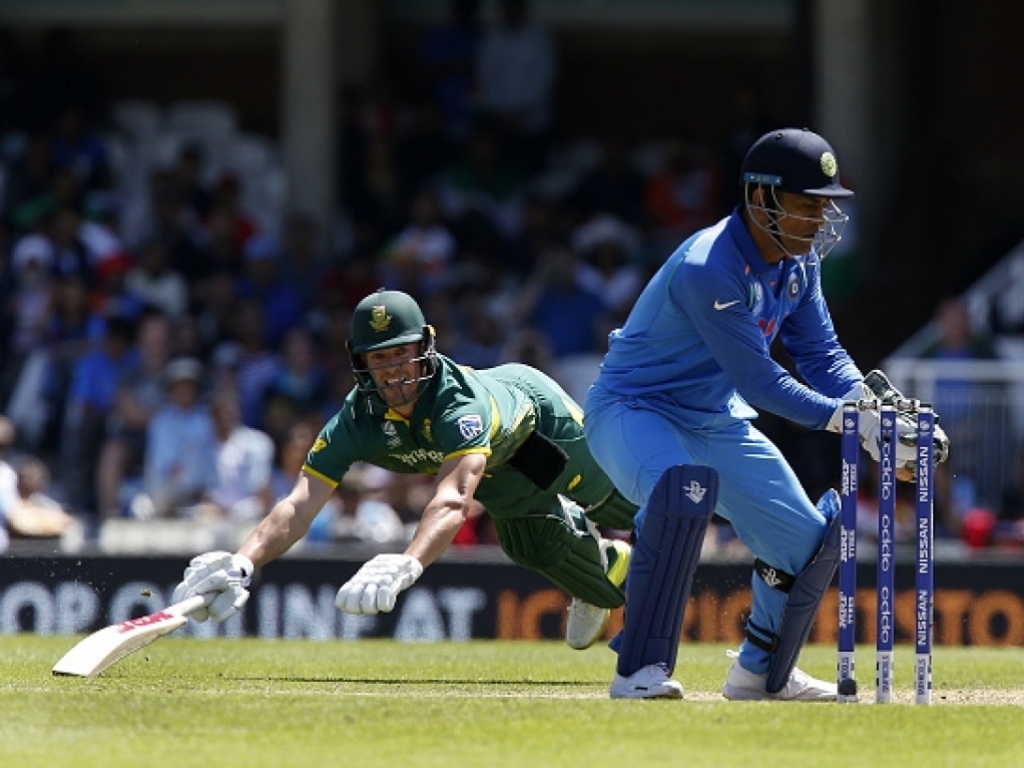 India secured a semi-final date with Bangladesh after they sent South Africa crashing out of the Champions Trophy in ignominious fashion.

The Asian side put up a near perfect performance as they easily chased up the Proteas’ meagre 191 all out, with eight wickets in hand.

Once again, South Africa flopped in a knockout match. After a solid start of 140 for two from 28 overs, the pressure of the occasion got the better of the side and they lost eight wickets for just 51 runs.

To put it mildly, the performance was embarrassing and further entrenched the “choker” tag that so begrudgingly haunts the team.

The Oval was packed to the rafters – 90 per cent by Indian fans – with India captain Virat Kohli opting to field first at the toss.

South Africa’s start was slow but steady as a combination of some disciplined fast bowling and nervy batting meant that Hashim Amla (35) and Quinton de Kock (53) managed only 35 runs in the first ten over powerplay.

Bhuveneshwar Kumar and Jasprit Bumrah had kept things in check but it was the spinners who would put an end to the openers’ innings as Amla was caught behind off Ravi Ashwin and De Kock was bowled when attempting to sweep Ravi Jadeja.

AB de Villiers, who many would have thought was due a big score, looked in fine nick and at 140 for two the Proteas would have had their eye on a 280-plus score on a dry and used surface.

The turning point was a suicidal decision to call for a single that resulted in AB de Villiers (16) falling a few inches short of his ground thanks to a superb bit of fielding by Hardik Pandya.

In the very next over David Miller (1) ran blindly whilst Faf du Plessis stood his ground and the two found each other at the same end of the pitch.

The blunder might have been comical if not for the dire consequences of the run out as the Proteas stumbled and fell.

This would be the second of three run outs, which would cause displeasure at the best of times, let alone in a virtual quarter-final.

India’s fielding has improved in leaps and bounds in previous years and today’s performance in the field greatly contributed to dismissing South Africa for such a modest total.

Du Plessis (36) was bowled by a lovely ball from Pandya (1-52) and the collapse had become devastating. JP Duminy (20 not out) hung around but ran out of partners as he failed to get much of the strike.

No other batsman would make double figures as Kumar (2-23) and man-of-the-match Bumrah (2-28) came back to mop up the tail with efficiency.

South Africa were well and truly beaten in the first innings and could bring themselves to do little more than go through the motions in their attempted defence of the paltry sub-200 total.

Shikhar Dhawan (78) and Virat Kohli (75 not out) made batting look easy as they casually knocked up the runs in front of a delighted crowd that sang and danced from beginning to end.

The winning runs were struck when there were still 12 overs to spare to complete a comprehensive drubbing.

Respect was shown to Kagiso Rabada (0-34) but India’s batsmen scored runs with ease off all of the other bowlers, who each conceded over five runs per over.

Proteas skipper AB de Villiers said after the match, “Not an ideal way to finish. Credit to them in those first 15-20 overs, put the pressure on us, we normally don’t bat that way. We never got going, very sad obviously. We were hoping to play a better game of cricket.

“We came unstuck against a better team. Couldn’t it get away. A lot of soft dismissals.”

India will feel they have one foot in the final as their semi-final is against Bangladesh at Edgbaston on Thursday.

They have only lost to that neighbouring country five times in 32 matches and, although Bangladesh are improving all the time, India really shouldn’t have much trouble dealing with them.

By Nick Sadleir – at the Oval