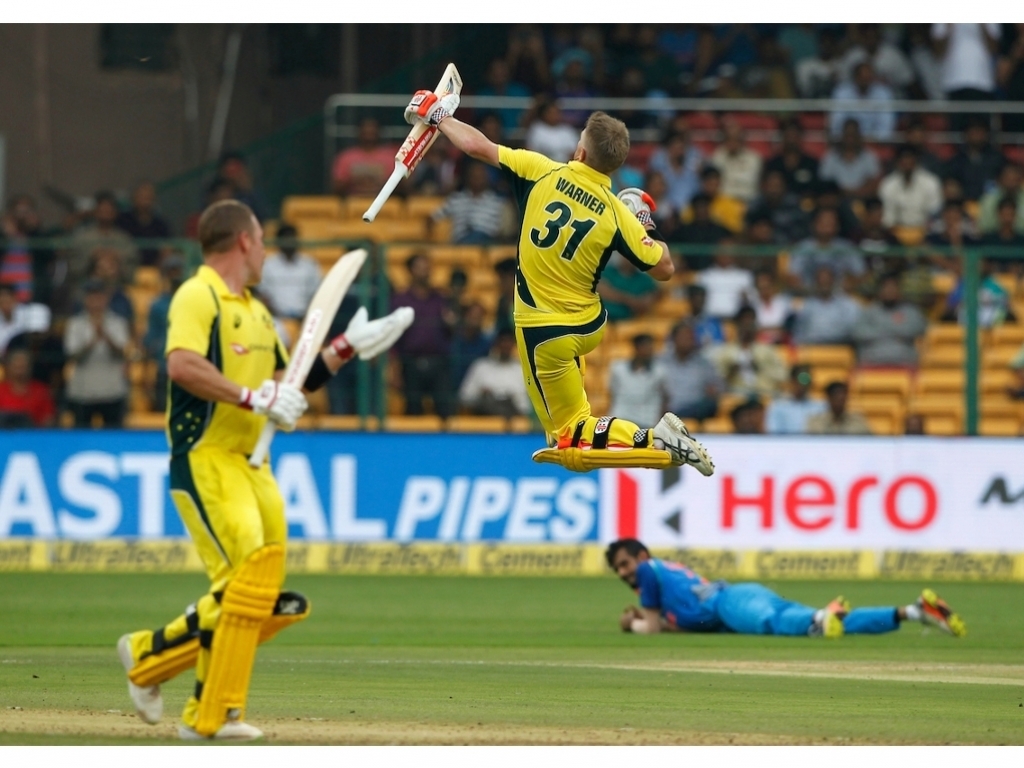 Australia were able to earn a consolation victory over India in the Fourth ODI at the Chinnaswamy stadium by 21 runs.

India were aiming for a record-breaking tenth straight ODI win.

The win was set up by a brilliant hundred from David Warner playing in his 100th ODI.

Warner (124) holed out to Kedhar Jadhav who rushed him with a flatter delivery.

Finch (94) went on the slog against Umesh Yadav but found only Hardik Pandya at mid-on and had to depart without adding to the score.

Yadav claimed four of the five wickets to fall as Australia went on the slog.

Peter Handscomb played a good cameo of 43 off 30 balls but Australia would have been concerned that they didn’t make the most of their great start.

India’s chase was a see-saw affair that started well with Ajinkya Rahane (53) and Rohit Sharma (63) putting on 106 for the first wicket.

Rahane took on Kane Richardson in the 19th over and came up short holing out to Finch.

India lost Rohit and Virat Kohli (21) to slide to 147 for 3 but then Hardik took on the Australia spinners.

Pandya (41) smashed Adam Zampa around and shared a 78 run stand with Kedhar (67) who looked to be guiding India to a win.

However after a rain delay Kedhar departed in the 46th over and was followed and Manish Pandey (33) who was bowled by Pat Cummins in the 47th.

MS Dhoni struggled faced with a required rate of over 12 and when he chopped Richardson on in the 48th over.