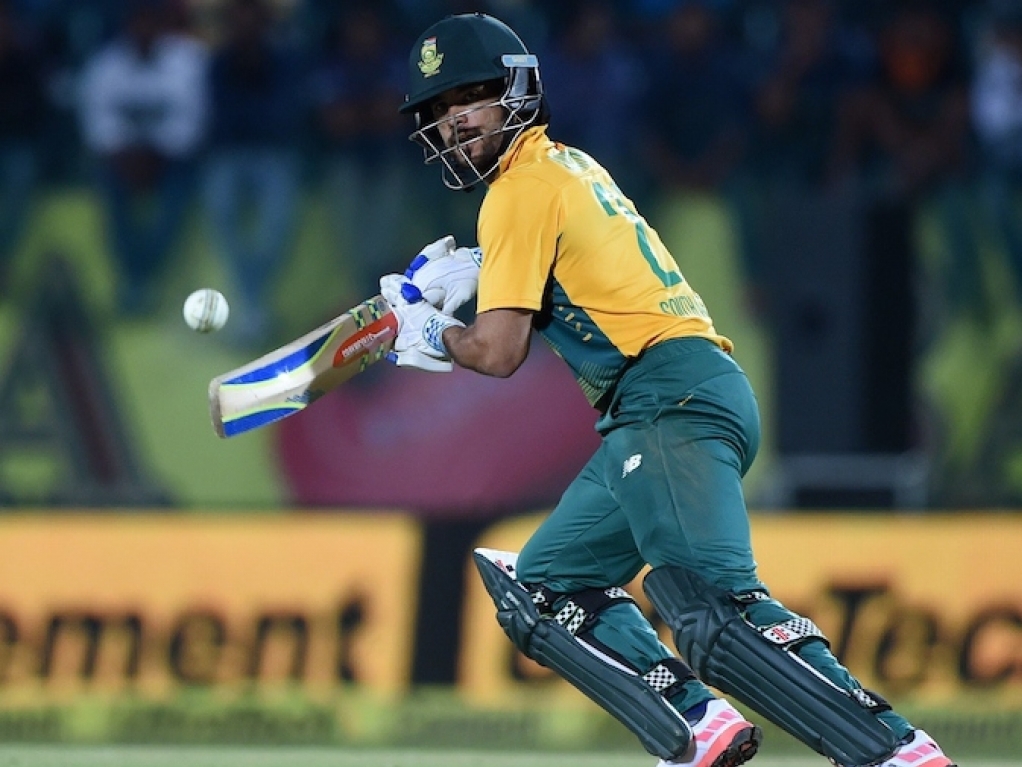 A brilliant unbeaten partnership of 105 runs between JP Duminy (69 off 34 balls) and Farhaan Behardien (32 off 23) helped South Africa draw first blood in the three-match T20 series as they chased down 200 runs for victory against India with seven wickets in hand and two balls to spare.

Rohit Sharma (106 from 66) earlier walloped a remarkable century to help India to a handsome score of 199 for five on a very high scoring Dharamsala pitch and it proved a perfect total for a most entertaining contest as the result was very much in the balance right until the last over, from which South Africa needed 11 runs for a hard-fought win.

The setting was the magnificent Himachal Pradesh ground, set against the backdrop of snow capped mountain peaks, at considerable altitude in the Himalayan foothills on the national holiday that commemorates the birth of Mahatma Gandhi.

The HPCA stadium has a well-earned reputation for producing mammoth totals and the opening match of this Freedom series played out true to form on a ground where mis-hits often clear the boundary rope.

In the North of India there is always the threat of dew on the pitch in the evening as cool evenings are preceded by hot clear days.

In this region at this time of year the temperature drops from 30 degrees Celsius in the afternoon to just 12 degrees in the evening.

Batting second is clearly an advantage here and the winning of the toss by Proteas captain Faf du Plessis helped to negate the control of the ball by India's bowlers and despite a couple of ball changes, Duminy in particular was able to overcome a stiff asking rate of 14 runs to the over with only a handful of overs left in the match.

Sharma survived what looked to be a very good LBW shout by Kyle Abbott (2-29) in the first over and in the absence of the decision review system (DRS) in Indian fixtures the batsman's survival had a huge impact on the match.

So it goes in Twenty20 where one or two key moments can make such a difference to the complexion a match. Sharma was ably supported by Virat Kohli (43 off 27) as the pair amassed 138 in just over 12 overs after Shikhar Dawan was run out via a misfield by Marchant de Lange.

At 160/1 after 15 overs the hosts would have had an eye on 220 but the partnership was finally broken when Kohli was caught off Abbot, who was easily the pick of the mainly listless Proteas attack.

MS Dhoni (20 off 12) finished the innings with a typical six off the last ball and helped save his side from a stutter and set South Africa a challenging total.

In a bold move by the visitors, their best bat AB de Villiers (51 off 32) opened the chase with Hashim Amla (36 off 24) and the pair raced to 77 without loss in the eighth over when Amla was too slow between the wickets for the quick arm of Mohit Sharma when chancing a quick single.

Surprisingly the spin of Ravi Ashwin (1-26) helped to slow the visitors up despite the dewy conditions and quite quickly the pressure was back on the Proteas.

De Villiers and du Plessis (4 off 5) struggled to maintain the momentum after the powerplay and were dismissed in the space of five deliveries as South Africa were reduced to 95 for three in the 11th over.

The chase now seemed difficult at best but the middle order pair kept their cool, rebuilt and then attacked. A stunned Indian crowd looked as if the bread had been taken right out of their mouths when Duminy smashed Axar Patel (0-45) for three consecutive sixes in the 16th over.

After the game man-of-the-match Duminy told Cricket365: "We tried our utmost to stay in the moment and understand what was required of us – Farhaan and I have batted together a number of times and we tried to keep going but the asking rate slipped to 13 an over – we needed to make it up after Ashwin's last over went for only eight and I guess it all just went right for us when we turned it around with 22 runs in the 16th. It’s a long tour for us and we are happy to have started out well."

The second match of the series will be played in Cuttack, the historical capital of Orissa in Eastern India, on Monday.