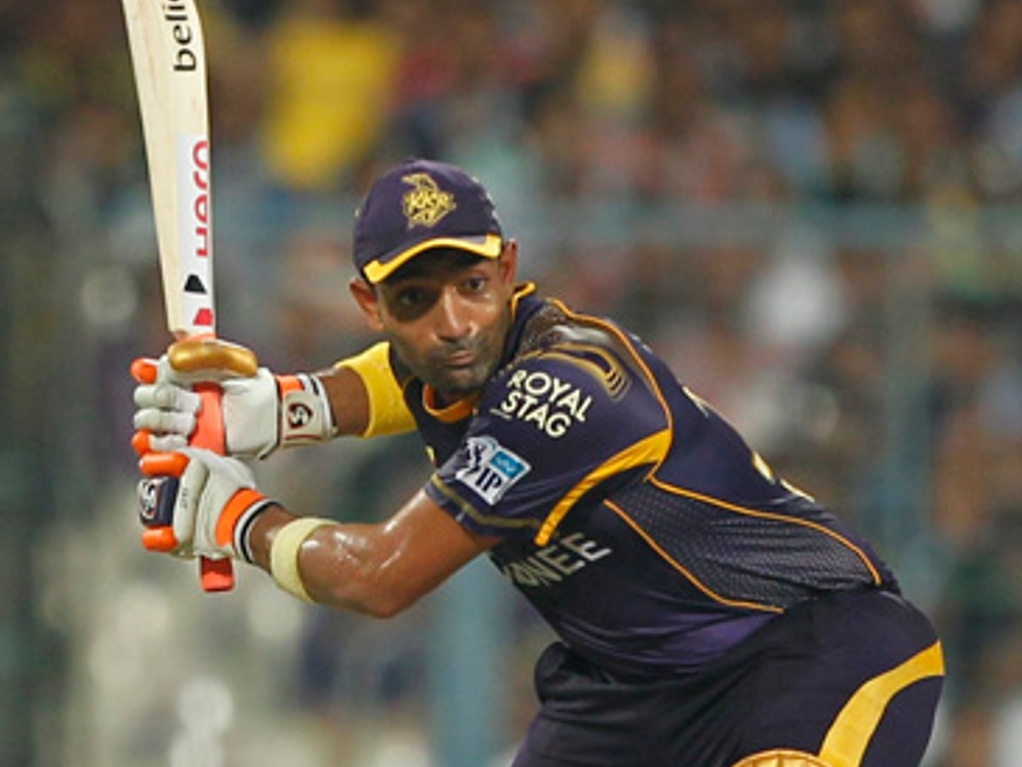 Three wickets in the final over of the chase made sure that the Kolkata Knight Riders were able to defend their target and beat the Kings XI Punjab by seven runs in the IPL on Wednesday. It lifted Kolkata to joint top of the table.

Kolkata had made 164 for three thanks to a century stand between Robin Uthappa and Gautam Gambhir, but it almost wasn't enough. Glenn Maxwell's half ton threatened to do the job, but superb death bowling staved off defeat for KKR and Punjab made 157 for nine.

Punjab opted to go with an all-Indian bowling attack, and for the first time since 2012 a side fielded just three of their for foreign slots, when KXIP opted to only use Marcus Stoinis, Glenn Maxwell, and David Miller.

Kolkata's innings was relatively trouble free for the first half as Robin Uthappa and Gautam Gambhir put on a century stand in 13 overs, but the batsmen didn't go as quickly as one would have expected.

The first wicket fall with the score on 101 when Gambhir was run out for 54, and Uthappa was also run out a few overs later for 70. This left Andre Russell and Yusuf Pathan to try and replicate their big hitting from their previous game.

But they weren't able to accelerate like they'd have wanted to, as the KXIP bowling stayed on track at the death. Russell made 16 off 10 balls and was run out off the final ball of the innings.

As such, the target wasn't as big as one would think, given the century stand, but KXIP made a right meal of the chase at the start, losing their first three wickets for just 13 runs.

Stoinis and Manan Vohra were both out for ducks, almost certainly ensuring new arrival Hashim Amla will play in the next match in place of one of them, probably Vohra, who has struggled so far.

This left Maxwell and Wriddhiman Saha to steady the ship, and they did well to take the score to 53 before Saha was bowled for 24 by Piyush Chawla. Maxwell continued to his half century, reaching it in 29 balls.

He and Miller, who has had a poor tournament and seen the captaincy taken off him, then reduced the asking rate to below 10. With five overs to go, KXIP needed 48 more runs and Maxwell was into the 60s.

And then, as Maxwell is wont to do, he tried to play countless reverse slog shots and was eventually trapped LBW for 68, the score on 110. They needed 35 runs off the last 18 balls, with Miller struggling to find his shots.

The South Africa batsman was caught in the 18th over for 13, continuing his dire run of form, and this proved a blessing in disguise as Axar Patel came in all guns blazing and hit two sixes in the rest of the over.

With 22 required off 12 balls, suddenly things went down to the wire, and the final over saw 12 required. Russell, the best option in T20 cricket, bowled it though, and he ran PAtel out with the second ball after a brilliant stop off his own bowling.

Gurkeerat Singh followed soon afterwards, also run out, leaving KXIP needing 10 off 3 balls but with two new tail enders at the crease. Russell then struck with an LBW, and all was said and done.