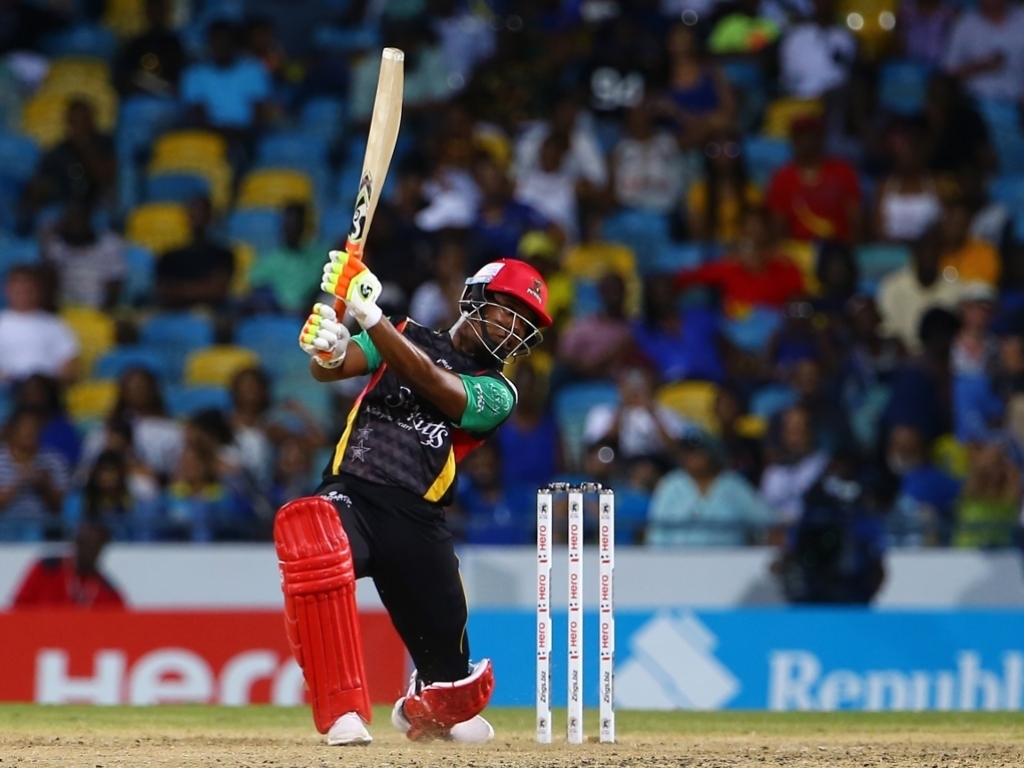 A historic innings from Evin Lewis consigned the Barbados Tridents to a 10-wicket defeat in Match 30 of the Caribbean Premier League (CPL).

Lewis blitzed 97 off just 32 balls in an astonishing assault that saw the St Kitts and Nevis Patriots chase 129 in only seven overs.

The Patriots innings run rate of 18.48 runs per over is the highest innings run rate in the history of T20 cricket. The result means the Tridents miss out on a spot in Finals Week while the Patriots have finished second in the table and will be given two chances at a shot in the final.

The Patriots run-chase was over almost as soon as it had begun. The formidable opening pair of Chris Gayle and Evin Lewis wasted no time in tucking into the Tridents’ new ball bowling. Lewis hit the ball astonishingly cleanly from the very start of his innings, taking three sixes from Wayne Parnell’s first over and never looking back. Lewis scored on both sides of the wicket but predominantly the leg side, picking sixes up over square leg, heaving them over mid-wicket and clubbing them straight. He reached his fifty off just 19 balls. Gayle was left in the unfamiliar role of support act.

The Patriots Powerplay score of 105 for 0 is the equal second highest score in the first six overs in T20 history. Lewis appeared set to bring up his century with the winning runs only for Pollard to bowl a no ball with one run required leaving him stranded on 97 not out.

Earlier in the evening, after winning the toss and electing to bat first, a bright start by the Tridents was derailed when they lost both openers to the last ball of the fifth and first ball of the sixth over. First Nicholas Pooran mis-judged the length of a ball from Mohammad Hafeez and was bowled when looking to pull. Then Dwayne Smith inside edged a pull shot off Carlos Brathwaite onto his thigh pad and into the wicket-keepers gloves. The Tridents scored 45 for 2 off their six Powerplay overs.

After the Powerplay Kane Williamson and Tion Webster appeared content to busily rotate the strike, picking off ones and twos in the outfield. However, the pressure of a slowly moving scoreboard begun to tell after a string of tight deliveries. Eventually it accounted for Williamson when he slog-swept Tabraiz Shamsi and was caught in the deep. Four balls later Eoin Morgan was bowled by Mohammad Nabi after playing down the wrong line as a consequence of some drift. The ball pitched and held its line, pegging back off stump. When Shamar Springer was trapped lbw by Shamsi in the following over the Tridents were reeling at 81 for 5.

Webster threatened to get going when he launched Nabi for a huge six and then delicately guided a four through third man. However, the wickets of Kieron Pollard and Webster in the same over from Carlos Brathwaite quickly extinguished hopes of a comeback as the Tridents slipped further into the mire. In the eighteenth over Brathwaite collected his fourth wicket, to finish with 4 for 15 in a spell of tight lines and back of a length bowling.

In the end, the Tridents limped their way to a total of 129 for 8 from their 20 overs, a total that was surpassed in just 42 balls.