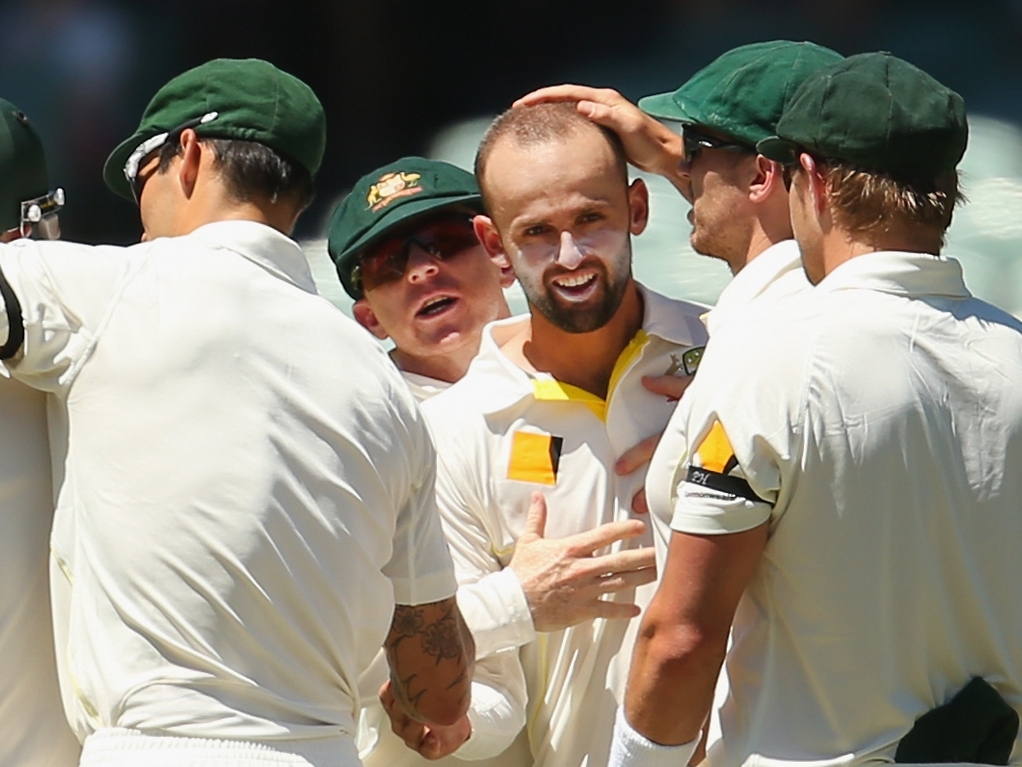 Australia pulled off a massive victory, by 48 runs, in the first Test against India in Adelaide, taking all 10 Indian wickets on day five thanks to a seven-fer by Nathan Lyon, negating Virat Kohli's century.

It was a thrilling final day, and a tense final session, which saw India come close to reaching the 364 required to win. Kohli's ton, his second of the game, and Murali Vijay's 99, gave India hope, but then a collapse.

India were all out for 315 with 10 overs remaining, having lost their last eight wickets for less than 80 runs. Lyon ripped through the order in the second half of the day, claiming his maiden Test 10-fer.

The day began with Australia having declared overnight (on 290/5) for the second time in the match, leaving India with a gettable target of 364. Until the final session, all four results were still in play.

India lost the wicket of opener Shikhar Dhawan early in the day, out for nine to Mitchell Johnson, before Cheteshwar Pujara became Lyon's first victim. He was caught behind, though replays showed it came off his arm.

Opener Vijay and Kohli then joined forces for much of the day, putting on 185 runs together. They took the score from 57 to 242, and in the process gave the Adelaide fans heart palpitations, especially after Vijay was given not out on a plumb LBW shout.

The pair went into tea on 205, leaving a challenging but not impossible chase in the final session. They advanced their scores into the 90s, and were on 99 at the same time. Kohli reached his first, roaring with delight.

He became only the second batsman after Greg Chappell to score twin tons on captaincy debut. Vijay was not as fortunate though, out for 99, this time the umpire saying yes to the simple LBW decision.

Things went wayward form there for India, as Lyon removed Ajinkya Rahane and Rohit Sharma for single figures, while Kohli battled at the other end. There was never a question of him shutting up shop for the draw.

He was eventually out to Lyon as well, miss-timing a pull shot and caught by Mitchell Marsh in the deep. It was the key wicket, and the entire Oz team rushed to the boundary as though they had already won.

The rest was by the numbers for the hosts, with Ryan Harris claiming Mohammed Shami's wicket and Varun Aaron falling to Johnson. It was fitting that Lyon got the last wicket though, with Ishant Sharma stumped.

Australia's joy, and relief at winning the game for Phillip Hughes, was overwhelming, though skipper Michael Clarke will be disappointed at picking up another hamstring injury and being forced to watch the win from the balcony.