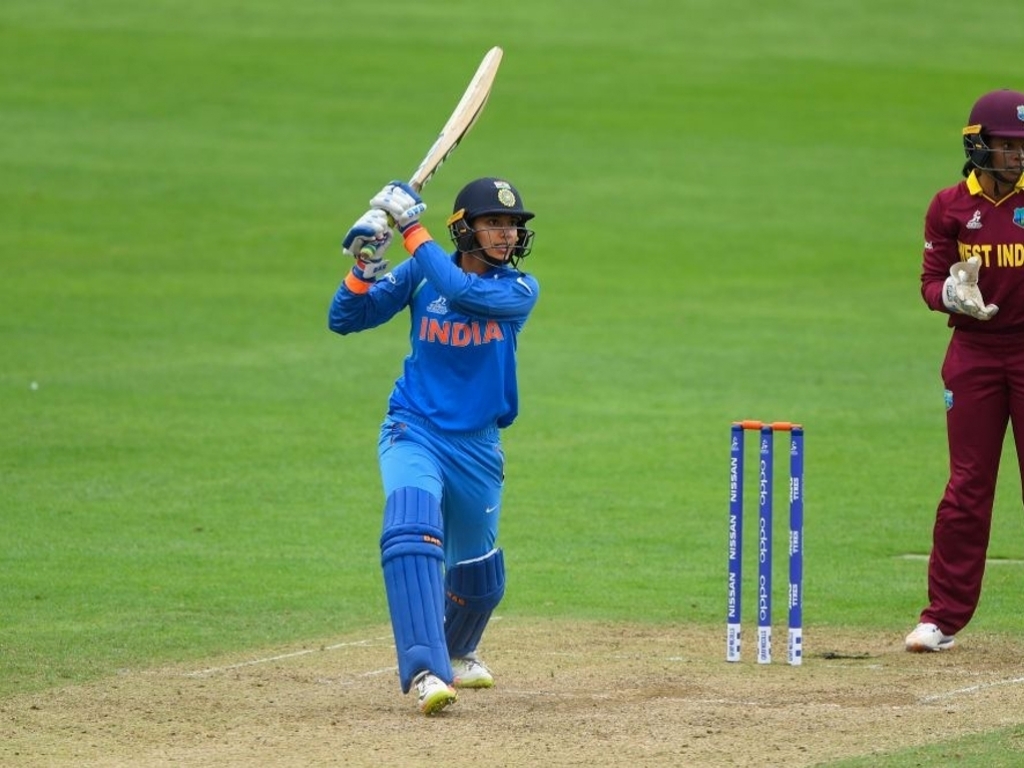 The setting for Stafanie Taylor and Deandra Dottin’s 100th One-Day International was poetic.

Taunton is the ‘home’ of Taylor in the Super League with Western Storm, it’s where the feats of Joel Garner and Sir Viv Richards grace the hallways, where Chris Gayle once sent a six into the river by the stadium.

The women, though, did little to add to the legend of the Caribbean at the ground, coming up with a second defeat in the ICC Women’s World Cup 2017.

Strangulation by spin from India had them restricted to 183 for 8 on Thursday, before Smriti Mandhana’s authoritative second international hundred and first at the World Cup guided the Asian side through with seven wickets to spare.

Mandhana, the left-hand opener who fell for 90 in the opener against England, attacked the pacers and worked the gaps to bring up a well deserved century off 105 balls. She was unbeaten on 106 off 108, in an effort that included 13 fours and two sixes, even as she received treatment at the breaks for lingering niggles.

Poonam Yadav, the leg-spinner who bowled a first spell that read 9-2-14-2, earlier worked well in tandem with Deepti Sharma, the off-spinner who finished with 2 for 27 off her ten, while Ekta Bisht was dependable as ever with 1 for 23. The Windies were timid in taking them on, and paid for it.

Put in, the Windies came out like a team that had learnt its lesson from its previous loss to Australia.

Hayley Matthews showed intent with her very first shot, while Felicia Walters seemed set on not repeating the mistake from her debut game of not rotating strike enough.

Matthews went along at over a run a ball, as the West Indies added a creditable 43 in the first Power Play. A dive by Harmanpreet Kaur that caused a dislocation of her left ring finger also threatened to leave India a player short. However, things went downhill for Taylor’s troops after that.

In conditions that should have helped them, Jhulan Goswami tended to bowl short and Shikha Pandey full. When Matthews took both of them for a pair of fours in consecutive overs, Mithali Raj turned to spin as early as the seventh over.

From the 11th until the 36th, India operated exclusively with its slower bowlers and choked the runs. It included a 20-over period where there wasn’t a single boundary.

Bisht, the left-arm spinner bowling around the wicket in an angle, struck with her first delivery to send back Walters.

A change of ends worked for Deepti, who got the big wicket of Matthews. The young opener, trying to hit straight, only made it as far as the bowler. In Deepti’s next over, Mandhana’s throw from short third-man caught Taylor short of her crease, and at 70 for 3, Windies was in danger of having its middle order exposed again.

Dottin didn’t look like the same batter who got a 38-ball T20 International hundred, eating up 48 balls for seven and ignoring the leg-side left open for her. When she attempted to break loose, Poonam had her caught at long-on to end her misery.

India missed a chance to wrap up the Windies innings quickly, dropping easy catches and allowing the tail to biff a few. Shanel Daley and Afy Fletcher did what the top order couldn’t, bringing out the sweeps and stepping out to the spinners. Fletcher added 37 in 4.5 overs for the unbroken ninth-stand with Anisa Mohammad, giving her side something to defend.

When Punam Raut was caught behind off a bouncer from Shamilia Connell and Deepti, charging down the pitch, was bowled off Taylor as India slipped to 33 for 2, it seemed as if the West Indies might make a match of it.

In Mandhana and Raj, though, India had two in-form batters. The first six of the match came from Mandhana, Connell taken over the deep mid-wicket boundary, before going for a four on the other side of the pitch.

Mandhana tended to live dangerously as she neared her half-century, a few shots just missing the fielders. But overall, it was a good-looking compilation of strokes. A single off her 57th delivery brought up her fifty, before another pulled six further lowered the gap between runs scored and balls faced.

Raj played the anchor, not going along at a great rate but appearing completely nonchalant in her strokes down the ground – until the loose shot that found the fielder at mid-off denied her a record-extending eighth fifty. Matthews, one of the Windies’ best bowlers of the day bowling around the wicket, was the one to end the 108-run third-wicket stand.

The bulk of the chase, though, had been completed by then.

Dropped in the deep at 94, Mandhana – no longer bespectacled while batting – brought up her milestone with a beautifully carved drive through cover and celebrated with a delighted smile and a raised bat.

Fittingly, she finished it for India with another boundary. India had needed 42.3 overs to complete their chase to make it two in two in the tournament and are looking good as tournament favourites.