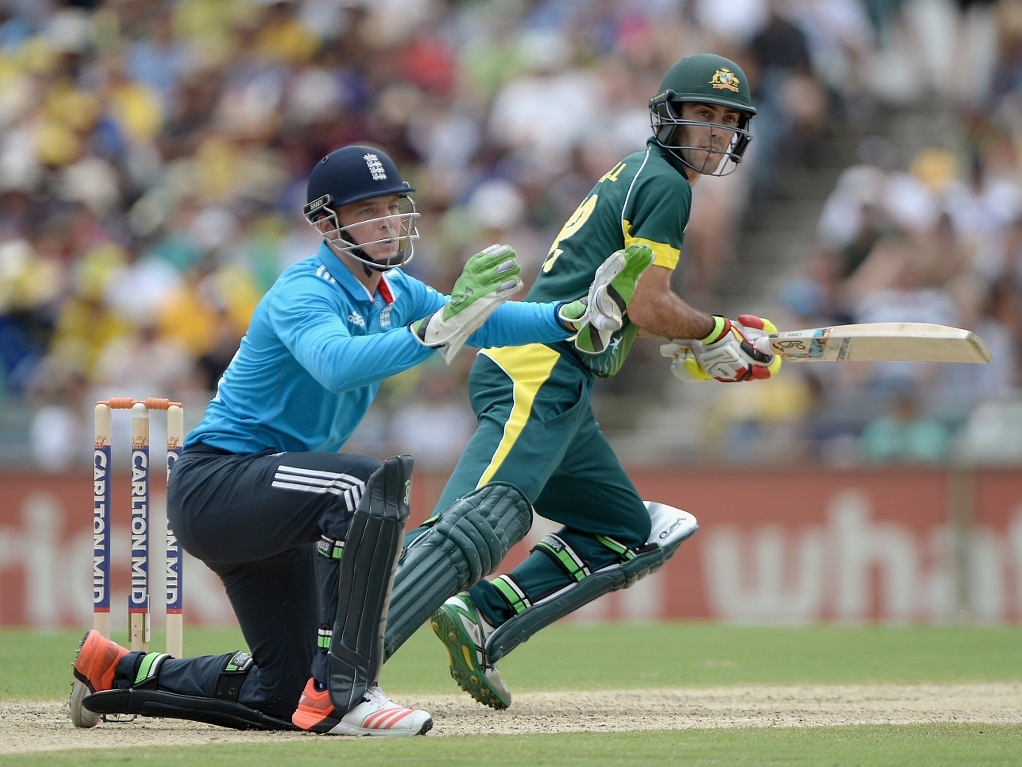 A career-best 95 and four wickets by Glenn Maxwell inspired Australia to a 112-run victory over England in the Carlton Mid Tri-Series final on Sunday.

After restricting Australia to 278 for eight, England's reply never really got going with the regular fall of wickets.

Ian Bell (eight) and James Taylor (four) were the first to be dismissed – falling to Josh Hazlewood and Mitchell Johnson respectively.

Mitchell Johnson, however, ripped the heart out of the England top order when he dismissed Moeen Ali (26) and captain Eoin Morgan (naught) from consecutive balls to leave England teetering at 46 for four.

Morgan's dismissal will be particularly galling for England, after the left-hander inexplicably decided to leave a delivery coming into him and was clean-bowled to leave Johnson on a hat-trick.

James Faulkner added his name to the wickets column when he dismissed Joe Root (26) plumb leg-before after the England mainstay played around a straight delivery that would have crashed into his stumps.

Shortly thereafter, Faulkner left the field with injury and seemed unlikely to bowl in the match again. Enter Maxwell once more…

Not to be outdone by the rest of the Aussie attack, Maxwell claimed the wickets off Jos Buttler (17) and Chris Woakes (naught) off consecutive deliveries as well.

Ravi Bopara (33) and Stuart Broad (24) added a manner of respectability to the score, but as a contest the match was over following the Morgan dismissal.

Steve Finn was the last man to fall for six.

Earlier, Australia posted 278 for the loss of eight wickets in their 50 overs after losing the toss and being sent in to bat first by Morgan.

The hosts' innings started in disastrous fashion when Aaron Finch fell for a duck in the first over of the match – caught by Root from the bowling of Anderson.

New batsman Steve Smith continued his rich vein of form, for a while atleast, but was somewhat hamstrung by the dismissals of David Warner (12) and George Bailey (two).

When Smith fell for 40 with the score on 60 for 40 – stumped by Buttler from the bowling of Ali – the proverbial cat was among the pigeons for Australia.

However, new batsmen Maxwell and Mitchell Marsh added 141 for the fifth wicket in just over 22 overs to bring the World Cup favourites back in contention.

Maxwell fell just short of reaching his maiden ODI century when he was caught behind from the bowling of Broad for 95, and while Marsh (60) and Brad Haddin (nine) fell soon after to make the score 224 for seven with five overs left, the Aussie charge wasn't quite done yet.

Faulkner then added some gloss to their innings with a quick-fire 50 not out, coming off just 24 balls and included four fours and four sixes.

Whilst the England bowlers generally stuck to their task well – Anderson took two for 38 while Ali took one for 39, Chris Woakes had a day to forget in the Perth.

The England seamer sent down 10 wicketless overs for 89 runs before falling for a first-ball duck to Maxwell.