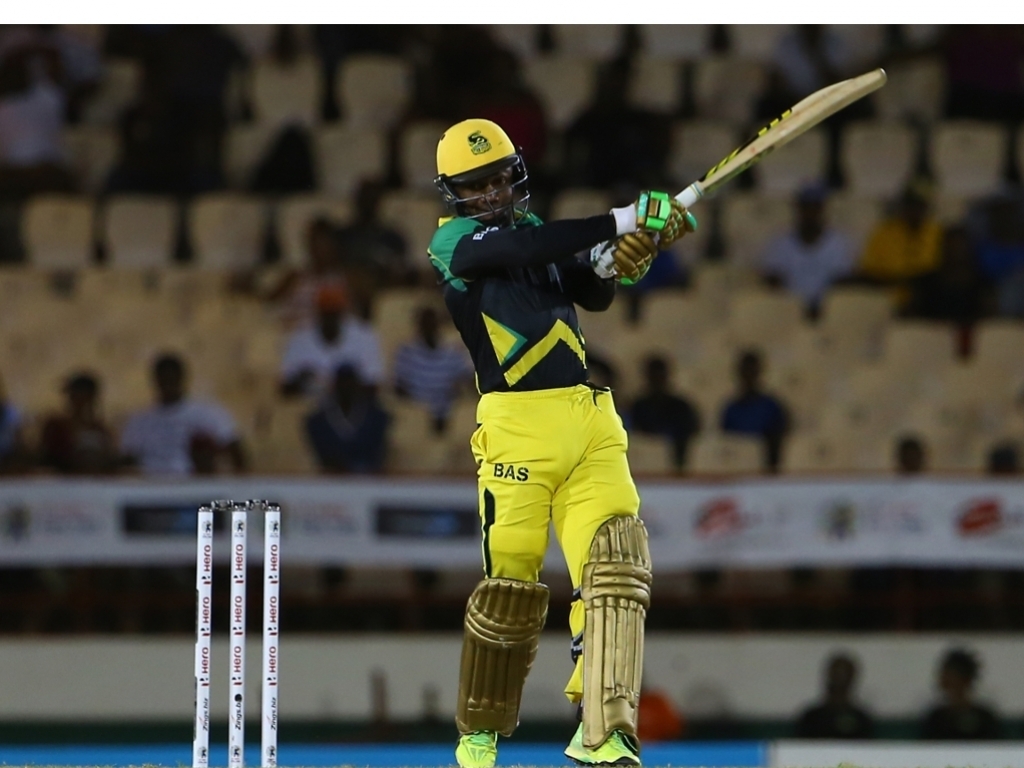 McCarthy was present at the crease from the seventh over onwards and marshalled a steep run-chase with busy running and boundaries all around the ground despite wickets falling regularly.

The Tallawahs innings was given a rapid start by Glenn Phillips who struck three off side fours in the first over and two leg side sixes in the third over, taking the Tallawahs to 34 for 0. Shane Shillingford pulled things back for the Stars however, conceding three from his first over and two from his second, dismissing Phillips with the last ball of the Powerplay, bringing McCarthy to the crease. Shortly after both openers were gone as Lendl Simmons was caught at extra cover off the bowling of Timil Patel.

Kumar Sangakkara briefly threatened to get going, striking two fours in an over off Patel but he was dismissed in the 10th over when he picked out a boundary fielder after slog sweeping Samuels.

When Rovman Powell followed shortly after, run out pushing for an unlikely second, the Tallawahs were in strife at 92 for 4.

McCarthy had been ticking along steadily with 20 off 18 when he was joined by Jonathan Foo with 82 required off 42. Foo wasted no time in getting going, striking back to back fours off his second and third balls and a six off his sixth ball reducing the equation to 63 off 36. Boundaries from McCarthy in each of the next two overs kept the Tallawahs in the hunt.

A quiet 16th over from Jerome Taylor, which cost just four, meant 40 was required from 18. With the first ball of the seventeenth over Mitchell McClenaghan bowled Foo with a brilliant yorker.  McCarthy responded in emphatic fashion, striking two sixes at the end of the over, dispatching a low full toss and picking a slower ball.

With 20 required from 12 Imad Wasim punished two short and wide balls from Jeromy Taylor for boundaries through point. The Stars thought they had Imad trapped lbw with the last ball of the penultimate over only for a no-ball to be called. When two were scored from the additional ball the Tallawahs had all but sealed victory with just four required from the last over. It was fitting of a spectacular lone effort that McCarthy finished the match with a six.

Earlier in the evening, the Stars powerful opening pair of Andre Fletcher and Johnson Charles were well restricted by the Tallawahs in the first three overs of the innings with just 13 runs scored. The pressure of that tight start told in the fourth over when Johnson Charles dragged a wide ball onto his stumps looking to hit through mid-wicket. In the same over Shane Watson fell for just one, caught behind after edging a brilliant delivery from Mohammad Sami that pitched and deviated away. At the end of the Powerplay the Stars were 39 for 2.

After a brief period of consolidation in which Fletcher and his partner Marlon Samuels scored at a run-a-ball for three overs, they launched a stunning attack on the Tallawahs bowlers, blitzing 85 in the following 7.2 overs before Samuels was eventually dismissed. Their final partnership was 103 off 64 balls. Both men hit powerfully but without panic, timing the ball beautifully and hitting notably straight. Fletcher reached his fifty off 35 balls, Samuels reached his off 36.

When the partnership was eventually ended as Samuels picked out a fielder on the deep mid-wicket boundary the Stars experienced a mini-collapse losing three wickets for seven runs and four wickets for 22 runs. Mohammad Sami was the pick of the bowlers for the Tallawahs, taking the big wickets of Charles, Watson and Darren Sammy. Imad was also economical, conceding just five runs from his two overs.

The Stars innings was given a late surge thanks to back-to-back fours from Jesse Ryder in the eighteenth over and back-to-back sixes in the twentieth over from Fletcher, who finished on 85 not out off 54 balls. Ultimately it wasn’t enough for the Stars to avoid a sixth defeat of the season.