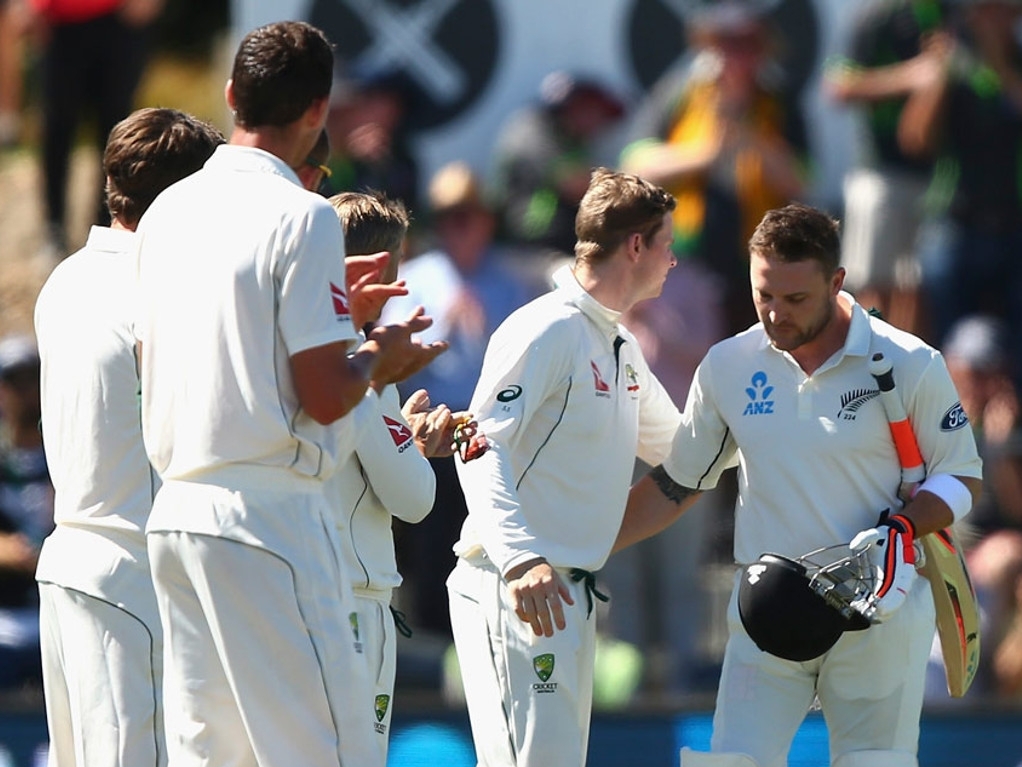 New Zealand skipper Brendon McCullum made sure his final match before retirement would stick in the memory, as he smashed the fastest ton in Test history on day one of the second Test against Australia.

McCullum brought up his century off 54 balls, two quicker than Misbah-ul-Haq and Viv Richards each managed, and eventually recorded 145 as the Black Caps were bowled out for 370.

At the close of play at the Hagley Oval, Australia had lost David Warner cheaply and were on 57 for one, trailing by 313 runs. Usman Khawaja was on 18, and Joe Burns on 27.

The day began with the Aussies, who lead the series one-nil, winning the toss and opting to bowl, given the grass on the deck. This seemed a splendid idea, as New Zealand were soon four down for just 74 runs.

The top four batsmen were all out cheaply, with only Martin Guptill reaching double figures, as Australia's four pacemen (Pattinson, Bird, Marsh, Hazlewood) each took a wicket.

But then McCullum arrived, in his 101st Test and at the ground where he scored 195 off 134 balls the last time he played here, to set the stadium alight. He took the bowlers apart, smashing six sixes and 21 fours in the 79 balls he faced.

When his record-breaking ton was brought up, thanks to a four through the covers, the packed crowd rose to their feet to applaude the retiring batsman. James Pattinson, who had bowled a no ball when McCullum was caught out on 39, would have been even more displeased.

The rest of New Zealand's order ws nowhere near as prolific, with half centuries from Corey Anderson and BJ Watling ensuring a good score despite McCullum's ton. They would have liked at least 400 after their skipper's heroics.

After Nathan Lyon's three wickets damaged the tail, Australia were sent in to bat for 20 overs after tea. Warner was removed by Trent Boult for 12, leaving Burns and Khawaja to consolidate.