Mire ton powers Zimbabwe to win over the Dutch 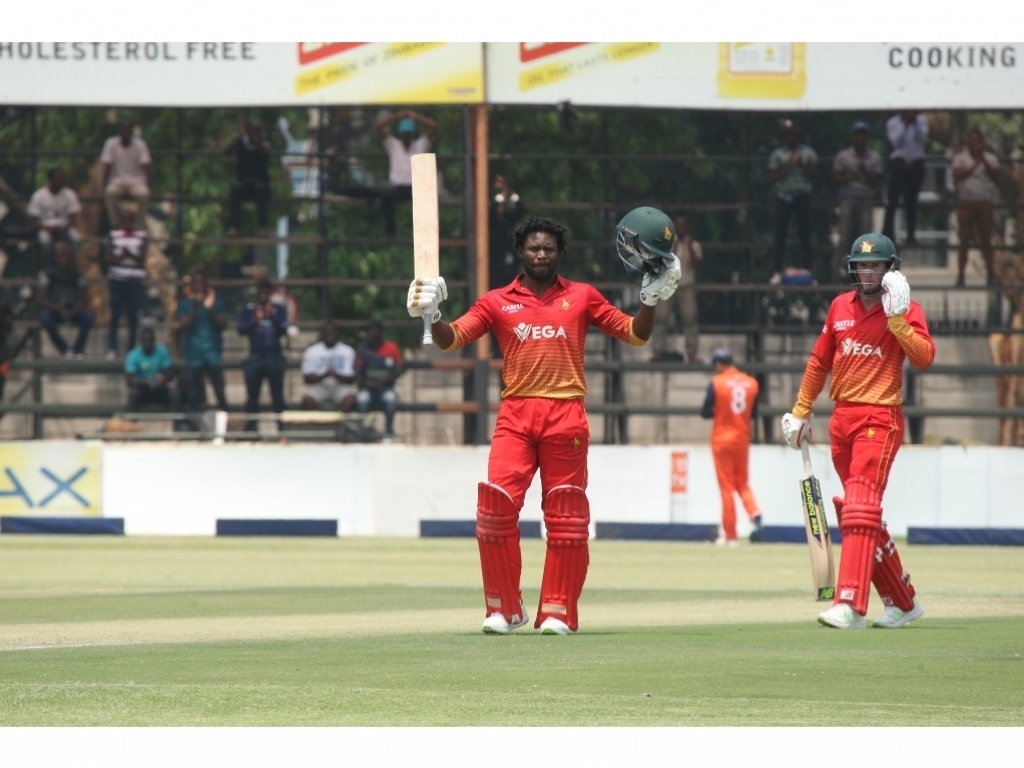 A brilliant century from opening batsman Solomon Mire propelled the Zimbabwe Select XI to a clear victory by 93 runs over the touring Netherlands team at Harare Sports Club on Wednesday.

The win was not as convincing as it could and should have been, though, as they were held up by a superb fighting century from the visiting captain, Peter Borren.

The Zimbabwe Select XI was virtually the full national team.

They won the toss on a warm, sunny morning with a pleasant breeze, and decided to bat.

The visitors, playing as the Royal Netherlands Cricket Board (KNCB) XI, began the bowling with Vivian Kingma and Fred Klaassen, both of medium pace, against the opening pair of Hamilton Masakadza and Mire.

They bowled an accurate length just outside the off stump, and after two overs the only runs on the board were two wides, as the batsmen were content to watch the ball go by.

Then a pull for four by Mire signalled a call to action and runs began to flow, with Masakadza hitting three fours in Kingma’s third over.

Masakadza had scored 18 when he was missed off a very difficult low chance at slip, Kingma being the bowler.

Mire brought up the team fifty in the eighth over with a powerful pull for six off the new bowler, Quirijn Gunning, that went out of the ground next to the main scoreboard.

With his score on 30, Mire skyed a powerful drive to mid-on, but the fielder, running to his left, never looked like holding the chance.

Later in the over he lofted another big hit just over the bowler’s head, but several fielders looked at it, decided to leave it for somebody else, and the ball fell to earth with nobody within five metres of it.

A reverse sweep for four off the left-arm chinaman bowler Michael Rippon brought Mire to his fifty off 44 balls.

The hundred came up in the 17th over, but at 102 Masakadza tried to copy Mire with a reverse sweep off Rippon, only to give a catch to point – he had scored 36 off 45 balls.

Craig Ervine did not last long, scoring just five runs before he drove rather loosely at the medium-paced Borren and was caught in the covers; 109 for two after 18 overs.

The scoring rate slowed down with Tarisai Musakanda in, and he struggled to get going; he made nine off 29 balls before, in desperation, he attempted a big hit and skyed a catch to mid-on off Borren; 140 for three in the 26th over.

Sean Williams, however, was in blazing form from the start, and after facing four balls had scored 11 already, including a slog-sweep for six over midwicket off Rippon.

Two successive sixes off the off-spinner Max O’Dowd took Mire to his century, the second one just failing to clear the roof of the four-storey building at the southern end of the ground – it took him 92 balls.

The 200 came up in the same over, the 33rd, and then Mire hit another gigantic six, this time putting a ball from Klaassen into the neighbouring rugby ground.

The hapless bowler had not learned his lesson, as he produced another long hop next ball, and Mire repeated the stroke for the seventh six of his innings.

On 127 Mire had another let-off, lofting a ball over the covers, but the sweeper running in dropped what should have been a fairly straight-forward catch.

This time, however, it was not expensive, as a few balls later he completely miscued a shot after appearing to change his mind, popped the ball up on the leg side and the catch was well held by the bowler, Klaassen, diving across.

Sikandar Raza cracked his first ball through the covers for four, and then Williams reached his fifty off just 41 balls, three fewer than Mire had taken for his half-century.

Williams and Raza briefly hammered the bowling for 28 runs in three overs before Williams fell to Gunning for 62 off 49 balls, caught on the leg boundary after hitting six fours and two sixes; 266 for five in the 41st over.

Raza and Malcolm Waller then continued the attack, bringing up the 300 in the 45th over.

Raza was caught at long-on for 36 off 25 balls, and Waller (15) edged the next ball to the keeper; Klaassen was the bowler and the score was now 308 for seven in the 46th over.

The two new batsmen, Peter Moor and Graeme Cremer, did their best to continue the onslaught, but immediately after Moor hit a six over long-on, they had a mix-up in running and Cremer was run out for 12.

In the last over Tendai Chatara surprised by wafting a ball from Klaassen over the midwicket boundary, before being run out for 12 from the final delivery, leaving Moor not out with 13.

The total was 347 for nine, Klaassen having been the most successful bowler with three wickets, although he conceded 80 runs.

Zimbabwe opened their bowling with Chatara and Richard Ngarava, against Wesley Barresi and O’Dowd for the Netherlands side.

The batsmen struggled to adjust at first to bowlers faster than their own, and Barresi soon fell for six, driving a catch to mid-on off Chatara.

Ngarava soon took his first wicket, as he had Ben Cooper caught at second slip for three, and the KNCB XI were 14 for two in the sixth over.

Rippon was next to go, slicing a catch to backward point that was superbly held by Musakanda; he scored three and the Dutch were 27 for three in the ninth over.

At 35 O’Dowd fell for 13, flicking a catch to backward square leg off Ngarava.

When Cremer replaced Ngarava he quickly picked up a wicket, trapping Pieter Seelaar, who fatally tried to sweep him, lbw without scoring; 37 for five now in the 12th over.

Sikander Zulfiqar now dug in with Borren, and the pair took the score past the 50 mark in the 15th over, and then to 100 in the 25th.

They played good sensible cricket, not trying to chase an impossible victory, but taking the runs as they came by working the ball skilfully round the field.

Borren went to a well-fought fifty off 65 balls, and then with a powerful on-drive over the head of mid-on Zulfiqar brought up the hundred partnership.

At this stage the Zimbabwean bowling attack was looking quite ordinary after its early success, and unable to drive home its advantage.

Zulfiqar also went to his fifty after facing 75 balls.

The partnership reached 160 in 30 overs before, with Borren on 99, Zulfiqar chose the wrong time to take a risk against the bowling of Waller, and was stumped for 58; 196 for six after 42 overs.

Two balls later Borren went through to a thoroughly deserved century off 108 balls.

His fine innings eventually came to a fitting end at 115, as he drove powerfully at a ball from Masakadza and Raza at extra cover leapt up to make a fine catch.

Borren hit 11 fours and three sixes, and on his departure the score was 223 for seven in the 45th over.

Masakadza followed up his success by bowling Tobias Visee for 12, and Gunning (2) became his third wicket when he drove a ball back to the bowler, who knocked it up to be caught at short extra cover.

The innings finished at 254 in the final over, as Kingma was caught on the long-on boundary off Williams as he attempted to hit a six, leaving Klaassen not out with 16 — the third-highest score of the innings.

Masakadza finished with the best bowling figures of three for 21, while the opening bowlers Chatara and Ngarava took two each.

The Netherlands side could well prove a better team in the second match, which is due to start on Friday, as today they did not seem fully adjusted to the local conditions and the altitude, especially in their fielding.

Zimbabwe will need to take the remaining matches seriously to avoid being the victims of a possible upset.