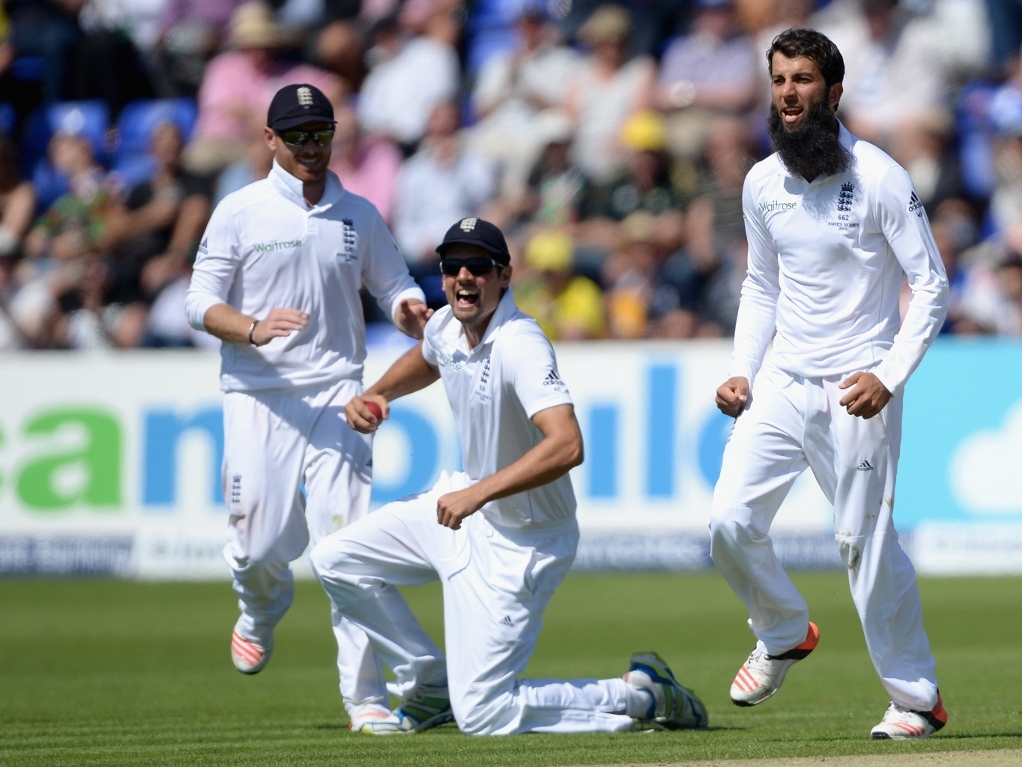 Moeen Ali was the catalyst as England ended day two of the first Ashes Test on top after reducing Australia to 264 for five at stumps, still a deficit of 166 runs with five first innings wickets remaining.

Moeen first hit a quick fire 77 in the morning session and then took two wickets, the important scalps of Michael Clarke and Steve Smith, as England left the field well pleased at the end of the day in Cardiff.

Resuming the day on 343 for seven, Moeen, who was on 26 overnight, attacked the bowling and made his way to 77 from just 88 balls before falling to left-arm quick Mitchell Starc.

Stuart Broad (18) and Mark Wood (7 not out) kept Moeen company as England added a valuable 87 runs to their overnight score to be all out for 430.

Starc was the pick of the bowlers for the Aussies taking a five-wicket haul even though he went for 114 runs in just about 24 overs.

Openers Chris Rogers and David Warner put on 52 for the first Australian wicket before James Anderson got Warner to edge through to Alastair Cook at first slip for 17.

Rogers and Smith then added 71 but Smith, who is ranked as the number one batsman in world cricket, lost his patience and was out to the spin of Moeen for 33. Clarke was another Aussie who played himself in but he was also out to Moeen, caught and bowled, for 38.

The 37 year-old Rogers, who is playing his last series before retiring, was playing well and made his way to 95 before Mark Wood got him to edge behind for 95.

Adam Voges and Shane Watson looked to have taken Australia to stumps but Ben Stokes induced Voges into a false drive to be caught at cover for 31 just before stumps were drawn.

The visitors will be very disappointed with their scorecard especially as their top five batsmen all got starts but no-one went on to a score century.

Watson, on 29, will resume in the morning with nightwatchman Nathan Lyon, nine not out, keeping him company.