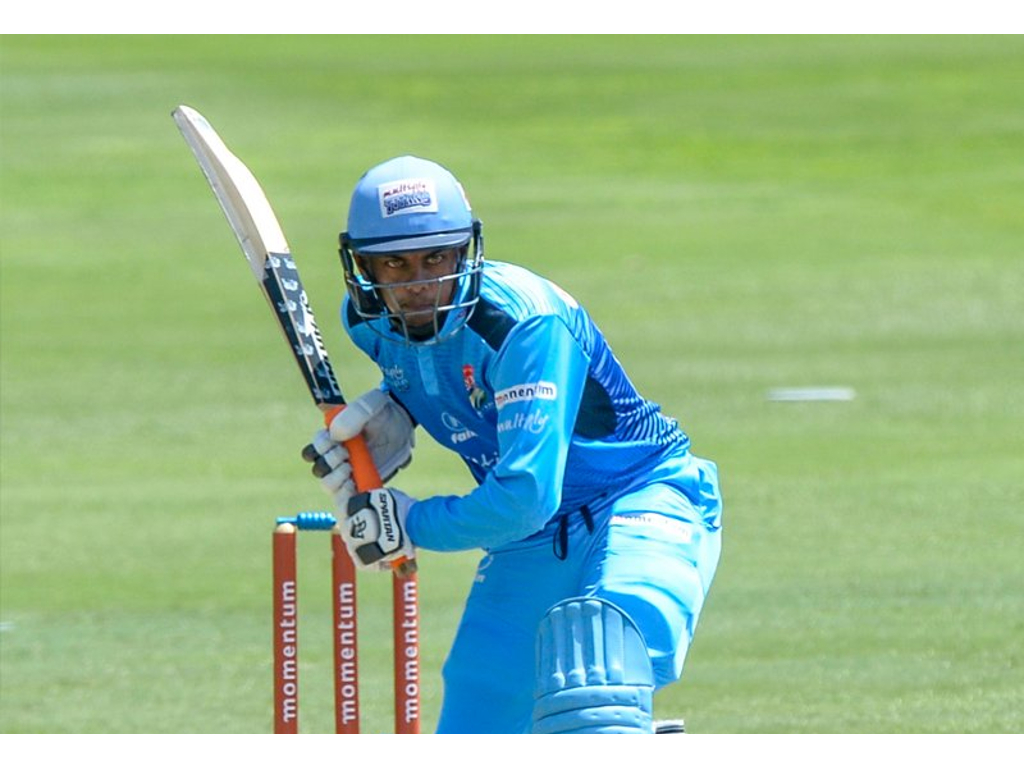 Maiden centuries by Andrea Agathangelou and Rivaldo Moonsamy set the Titans on their way to a massive 104-run bonus-point win over the Warriors in the Momentum One-Day Cup clash at Willowmoore Park in Benoni on Sunday.

There were also three wickets for Tabraiz Shamsi (3/54) as the visitors were bundled out for 208 in pursuit of 313.

That total was built around opener Agathangelou’s platform-laying innings and an attacking effort by No. 3 Moonsamy after their side had won the toss and elected to bat first.

The former top-scored with 113 (124 balls, 9 fours, 4 sixes), his maiden ton in List A cricket and bettering his 94 scored while playing for North West against Eastern Province in provincial cricket way back in 2010/11.

Moonsamy, meanwhile, recorded his maiden ton at franchise level and second overall when he struck a breezy 107 (98 balls, 11 fours, 2 sixes).

It enabled the Titans to amass 312 for seven. The pick of the away bowlers was Sisanda Magala after he claimed three for 65.

The Warriors made a decent attempt to chase down the total, particularly early on as Gihahn Cloete clubbed 82 (74 balls, 13 fours, 1 six).

The men from the Eastern Cape had reached 106 for two in the 19th over, but they then faded away badly.

Shamsi was the chief destroyer, but Junior Dala and Grant Thomson picked up two for 28 apiece as the Warriors fell apart.

Magala’s 30 was the next best score with his side slumping to a third loss in four games.

Elsewhere half-centuries by JP Duminy and Pieter Malan helped the Cape Cobras make it three Momentum One-Day Cup wins in a row after they cruised to a seven-wicket win over the Highveld Lions in Johannesburg on Sunday.

Dane Paterson also played a key role at the Wanderers Stadium by taking three for 41 in an excellent bowling display that saw the hosts bowled out for 237 in 49.4 overs.

It was an excellent end result for the Cape side and ensued they remained joint-top of the table with the Multiply Titans, on whom they inflicted a first defeat just two days earlier.

The Lions had won the toss at the start, but their batting again failed to fire. Rassie van der Dussen top-scored with 65 (71 balls, 7 fours), but he lacked support.

Dwaine Pretorius (45) and Dominic Hendricks (40) made good starts, while Mangaliso Mosehle (27) and Hardus Viljoen (21 not out) also chipped in without failing to kick on.

It meant the hosts limped to a below-par total with two wickets each also for Rory Kleinveldt and Mthiwekhaya Nabe – both ending with two for 41.

A brisk 40 off 27 balls from Richard Levi set the tone for the visitors, and even though Beuran Hendricks (2/40) collected tidy figures, there was no stopping Malan and Duminy from sealing a relatively calm win.