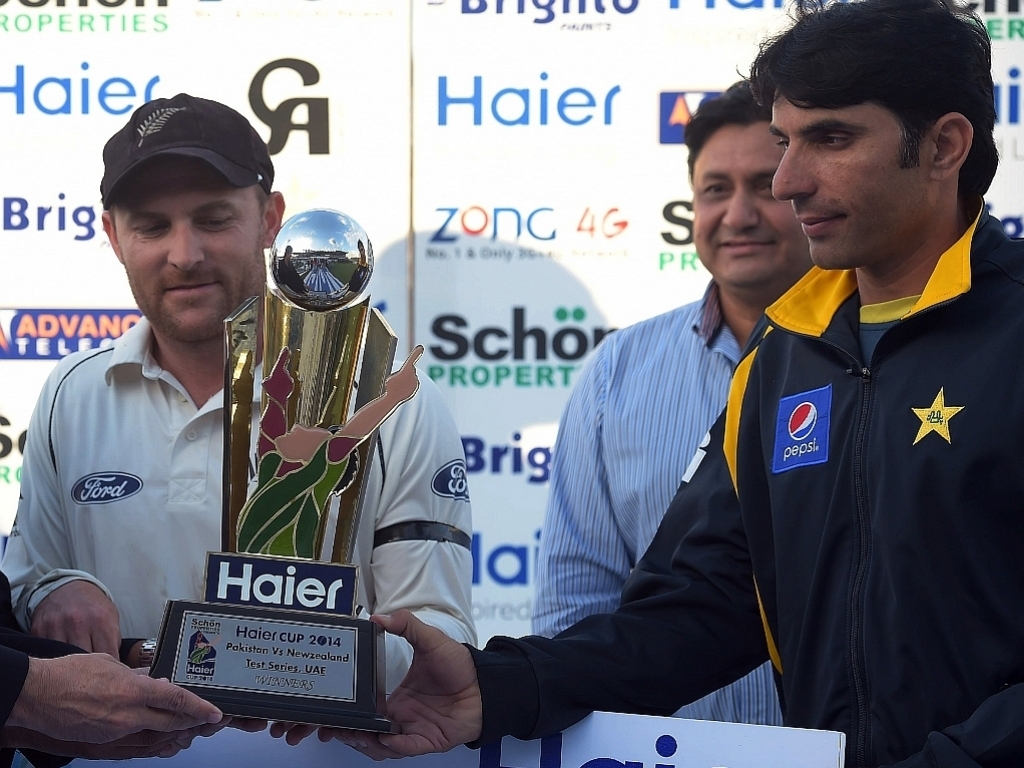 New Zealand beat Pakistan by an innings and 80 runs in the third and final Test between the two nations to square the series at one-all.

Brendan McCullum's side resumed their first innings on Sunday morning on 637/8, with Mark Craig on 34 and Ish Sodhi still on naught after Tim Southee was dismissed off the final delivery of the day on Saturday.

The Kiwi batsmen continued to play aggressively on the fourth morning and Craig eventually brought up his second half-century of his short Test career, before falling for 65 when he was caught and bowled by Mohammad Hafeez.

The New Zealand innings then came to an end two overs later with the score on 690 – their highest ever total – when Sodhi (22) was leg-spinner Yasir Shah's fourth wicket half-way through the morning session.

With a first innings deficit of 339 runs, Pakistan desperately needed some doggedness at the crease, but three strikes by Trent Boult soon put an end to any hopes of a spirited fight-back by the home side.

Shan Masood (four) was the first to go when wafted at a wide-ish delivery and found Southee at second slip, who made no mistake with the catch.

Number three Azhar Ali was next to go when he misjudged a Boult delivery that kept on coming in to him and was castled six without offering a shot.

Bad quickly went to worse for Pakistan when new batsman Younis Khan was given out LBW after being struck on the pad the first delivery he faced in Boult's next over.

The former captain reviewed the decision but the third umpire upheld the decision after ball-tracking technology suggested that the delivery would clip the leg stump.

Captain Misbah-ul-Haq then walked to the wicket just before lunch with the score on 24/3 and together with Hafeez, were able to see off the remainder of the session.

After the lunch break, though, the procession of Pakistan wickets continued as Hafeez (24) first returned the favour to Craig when he chipped one straight back to the off-spinner, who made no mistake with the simple return catch.

The match was virtually over as a contest when Misbah was dismissed with the score on 12, adjudged caught behind from Craig to make the score 63 for five.

Asad Shafiq was joined at the wicket by Sarfraz Ahmed, and with Pakistan still more than 250 adrift of making the Kiwis bat again, change in approach was visible.

Together 73 entertaining runs for the sixth wicket before the wicket-keeper was caught by Ross Taylor in the slips off Sodhi for 37.

With wickets continuing to fall around him, Shafiq showed some of his class and added another 123 with Shah (10), Mohammad Talha (19) and Rahat Ali (six) en route to a well-played fifth Test century.

With less than an hour to go in the fourth day, Shafiq perhaps played one aggressive shot too many and presented Boult with his fourth wicket of the match when he skied one to Craig on the mid-wicket fence for a well-played 137.

Craig then claimed his 10th scalp of the match when Talha was caught by McCullum inside the circle.