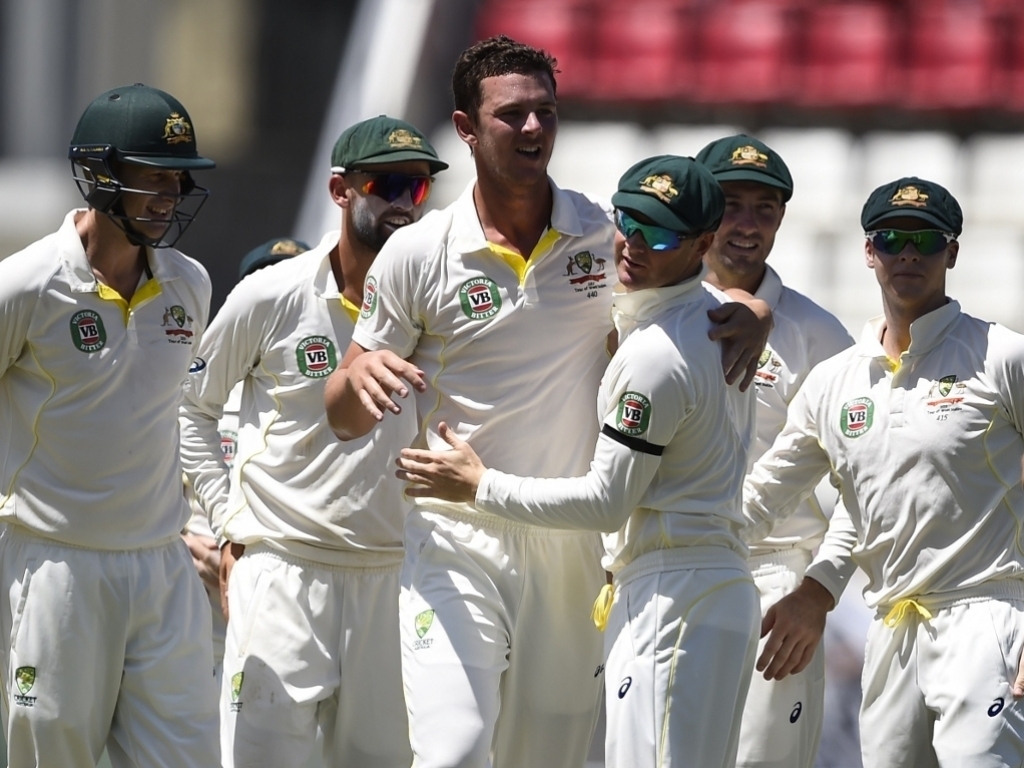 Steve Smith failed to make his maiden double Test ton but he helped his side to a commanding 399 all out and the West Indies collapsed in an all too familiar fashion to be 143 for eight, 256 runs behind, in reply at Sabina Park in Kingston, Jamaica.

So With three days to go it looks as if we are due another curtailed match and a 2-0 series win for Australia.

If there are two Test batsmen whose two top scores are in 190’s then it would be a statistical anomaly. Smith's previous best was 192 against India in Melbourne six months ago. He is on some serious form with the bat and carried his side impeccably, making 199.

I have covered every West Indies Test against a top eight side over the past 18 months and the deja vu in the match reports becomes very real. A cricket journalist could probably just keep a Windies template and just fill in the scores at the end of the day. Something along the lines off "The West Indies displayed moments of brilliance as they bowled aggressively and took key wickets but some avoidable mistakes gave the opposition the edge and then the West Indies top order simply faltered as they played unnecessary shots and lost their wickets too cheaply…"

Australia haven't asked many sides to follow on in recent years and it is interesting to note that all three times that a side has bounced back to win a Test after following on, the losing side was Australia.

If the last two West Indies wickets fall early on day three and the visitors fancy an extra day or two on the beach then we might just see the home side putting the pads on again in the morning. WIth the Ashes around the corner however, Clarke and co might just prefer to spend some time in the middle. Managing bowlers' workloads is as important as anything else.

Fourteen wickets fell on a day that offered rewards for good pace bowling. There were runs on offer too but it is one of those pitches where only well set batsmen reap rewards.

Smith certainly was one of those until Jerome Taylor (6-47) had him trapped LBW with a swinging yorker that gave the bowler career best figures. Taylor's effort was herculean and it is terrifying to think how one-sided this match could have been had he not bowled 25 overs.

Taylor struck twice early in the day, and had the Windies not dropped another regulation catch or missed another regulation stumping, the first innings might not have gone much beyond 300 as the tail kept Smith company and the scoreboard kept ticking on till it was nearly tea time but there surely comes a point where one can't keep on saying, "had this" or "if that."

Australia's bowlers would have had the England Test team quivering in their boots, should they have been watching this Test. Hazlewood (3-15), Starc (1-33) and Johnson (1-38) were violent out there and the surprise package of spinner Nathan Lyon (3-35) wreaked havoc with a new ball as the home side contrived to collapse.

The debut of Guyanese opener Rajendra Chandrika begged the question of whether it was necessary to drop his countryman Shiv Chanderpaul, without giving the senior batsman a farewell series here. Chandreka has a first class top score of only 90 and he struggled with nerves against the increase pace of bowling that comes with international bowling as he missed several balls and then managed to get an edge on the seventh one for an unremarkable duck.

Jermaine Blackwood (51), whose diminutive stature almost reaches the breastplate of Jason Holder, opted for some entertaining rearguard action but his cameo was not enough to give the side anything respectable on the scorecard.

This match continues in Kingston but probably not for very long. Day three coincides with the biggest horse racing meeting of the year in Jamaica and many sports fans' considerations about which event to support would have been decided by yet another shoddy afternoon with the bat.