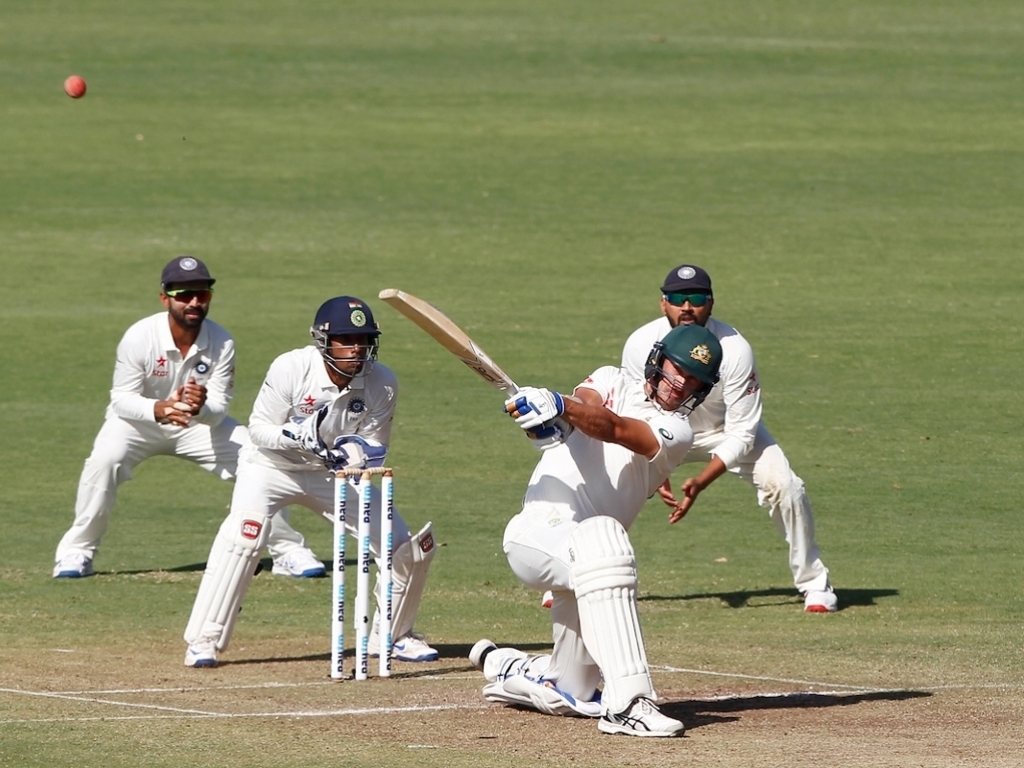 Australia had their moments on the opening day of the first Test against India reaching 256/9 by stumps after a promising start.

The toruists lost just one wicket in the first session moving to 84/1 by the meal break but had Matthew Renshaw retire ill with an upset stomach.

Opening partner David Warner (38) looked in good nick until he chopped on to give Umesh Yadav the first of his four wickets in the day.

Steve Smith and Shaun Marsh (16) dug in for a spell but the latter would depart inside the first hour of the second session leaving Australia 119 for 2.

There was still no sign of Renshaw as Peter Handscomb (22) emerged from the dressing room and he would add 30 with his skipper before they fell within an over of each other with tea looming.

Smith will not be pleased with his dismissal having worked hard for his 27 he chipped one to midwicket from Ravi Ashwin to throw it all away.

Renshaw returned with the fall of Handscomb’s wicket and would see the team through to tea with Mitch Marsh who survived a caught behind appeal courtesy of DRS.

In the final session Umesh returned to tear apart the Aussie lower order.

Renshaw became the youngest Australian to score a fifty in India after losing Marsh (4) who was trapped leg before by Ravindra Jadeja.

When Yadav got rid of Matthew Wade (8), also trapped leg before, and Renshaw was caught at slip off Ashwin for 68 Australia’s innings looked to be winding down.

Umesh removed O’Keefe (0) and Lyon off successive balls and many felt India would get to bat a few overs before stumps.

Mitchell Starc had other ideas though, along with pace partner Josh Hazlewood he added an unbroken stand of 51 to the cause.

Hazlewood contributed just one run but Starc striking at nearly a run a ball made up for that reaching 57 not out by stumps.

Umesh ended as the pick of the India bowlers with figures of 4 for 32.

Australia will be hoping Starc can pull off a miracle om day two to keep them in the game.