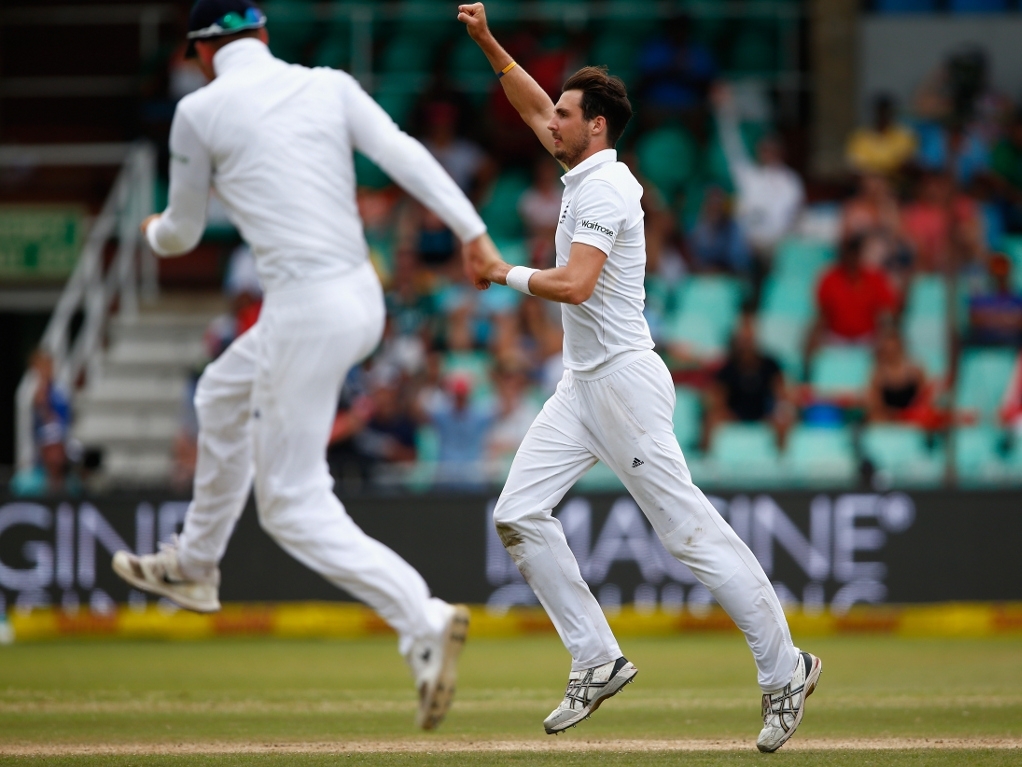 Paceman Steven Finn, with three wickets, gave England the edge at the close of the fourth day of the first Test against South Africa at Kingsmead in Durban, with the hosts on 136 for four, still requiring another 280 runs on the final day.

Test history dictates that it is pretty close to impossible to chase over 400 in the fourth innings of a match. Indeed, the feat has only ever been achieved on four occasions.

Before the late in the day wicket of a stone-walling Faf du Plessis, however, South Africa might have felt that they have an outside chance of knocking up 416 runs for victory in the first Test against England, at Kingsmead.

England were dismissed 45 minutes after lunch for a total of 326, thereby setting the hosts 416 in 140 overs, almost exactly three runs to the over.

If there is such a thing as a perfect time to be bowled out then it might have happened today as England set South Africa a score that was low enough that if the home side were to survive the overs then they would probably go for it.

But the target is also high enough that if they somehow chased it down then it would be the second highest ever chase in Test history, and only two runs short of the 418 for seven chased down by the West Indies against Australia in Antigua in 2003.

The thing about dangling a carrot with a low run rate required is that it so often results in a victory for the defending side.

The Proteas batsmen mostly seemed solid in the middle but with so many overs to be bowled, England were able to just chip away at the SA batting line-up.

Earlier, offspinner Dane Piedt took his maiden five-wicket haul as he impressed at his craft and helped put an end to an England innings that continued to add runs despite losing wickets.

Johnny Bairstow (79) looked destined for a hundred but he lost the race against a potential declaration when JP Duminy took a blinding catch at short extra cover to put an end to the ever-growing England lead.

There were no scores bigger than Bairstow's on the visitors' scorecard but instead it was one of those team-effort innings where so many batsmen chip in with a handy contribution.

In the absence of the injured Dale Steyn, who might well be deemed too much of an injury risk to play at Newlands on Saturday, Stiaan Van Zyl (three for 20) managed a tidy spell as the batsmen tried to take him on and up the tempo of their progress.

If the home team's openers were told to play for a draw then they sure didn't show it as Elgar (40) and van Zyl (33) put on 50 runs in the first 10 overs before the left-handed van Zyl was bowled by a beautiful inswinger from Ben Stokes (on for 26).

Finn (three for 27) then got Elgar put to an end a rollicking start that clearly showed the home side had 416 on the brain, and then the lanky bowler found the edge of Hashim Amla (12) and then du Plessis (9) in the last over of the day.

Captain Amla has averaged just 15 runs per innings over his last 10 outings and whilst Faf's record is no better, he did at least apply himself to keep out 66 balls over 103 minutes before Finn produced a delivery that rose more quickly than anticipated before it found the edge of Du Plessis bat.

South Africa's batting order shows signs of having a long tail – not that the top or middle order have looked any more useful in recent months – and they are indeed staring down the barrel of an almost inevitable slow death on the last day.

Should England prevail it would be only their second win in their last 16 overseas Tests. Their last away win having been six months ago in Grenada against the West Indies.

Stranger things have happened between these two sides but it would take an heroic feat from AB de Villiers (37 not out), and whoever might be able to keep him company for several hours, to force anything other than defeat at Kingsmead.