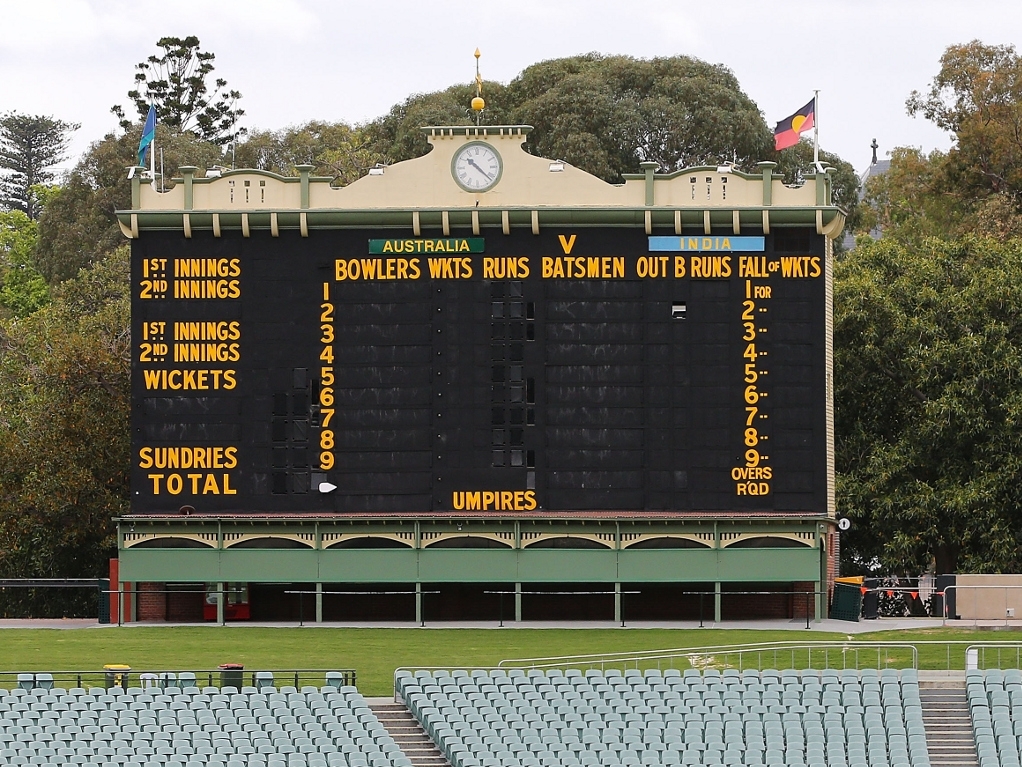 Recent upgrades to the Oval, including a large new grandstand which is part of a redevelopment plan that will boost capacity to 50,000, have been carried out with due respect for the older stands and the famous scoreboard – and it remains one of cricket's most picturesque grounds.

The most recent Test here was the Ashes drubbing the Aussies gave to England, almost exactly a year ago. The hosts won by 218 runs in early December, thanks to first innings centuries from Michael Clarke and Brad Haddin.

The hosts won the toss and opted to bat, as is almost always the case on a deck that tends to stay quick and true, and put on a hefty 570 for nine declared. Clarke made 148, while Haddin came in down the order and added 118.

An unbeaten half century from fast bowler Ryan Harris showed how good the deck was, as three other batsmen also made fifties, aside from the tons mentioned above. For England, the best bowling came from Stuart Broad, who took three wickets.

England's batsmen (on their way to a series whitewash, we recall) were abject in reply, with Mitchell Johnson ripping through them and taking seven wickets. Ian Bell top-scored with 72, as only three batsmen made double figures.

England were all out for 172, but Clarke did not enforce the follow on, opting to add more to the tally. They Aussies put 132 more runs on the board, with David Warner smacking 83, leaving England needing 531 to win.

The visitors were slightly better the second time around, but could still only reach the 300s as Johnson took three more scalps, and Peter Siddle bagged four. Joe Root, Kevin Pietersen and Matt Prior made half tons.

England captain Alastair Cook after the defeat: "On a good first-innings wicket, we created some chances and we didn't take those chances. Australia have been very clinical in taking every chance that has come to them. We haven't done that. We let them off the hook and they punished us very heavily."

India paceman Ishant Sharma this week: "The old ball is going to be really crucial for us. How you are going to bowl with the old ball to a certain batsman. That's the time you can go for runs. It's difficult for the bowlers, when you are tired, your mind is drifting from one side to the other and how you can control these things is important.

"Even with the old ball, when the wicket is slow, if you hit the wicket hard, you're going to get the bounce that you need. The conditions are helpful for those kind of bowlers who bang in the wicket hard and not just release the ball."

There are only five players with more than 1000 Test runs at this venue, and the only current batsman is skipper Michael Clarke. He has played nine Tests here and score six tons, averaging nearly 99. He will need all his mental strength to add to that tally this week.

The next current player is well down the list, and that is Haddin, who has nearly 500 runs at the ground. He's played five Tests here, averaging over 100, with two tons and two half tons to his name.

Most of this India side have not played in Australia before, but the last time they did, in 2011, Virat Kohli scored a century at the ground, though it went in vain as the Aussies won by nearly 300 runs.

Bowling-wise, India's best performer last time was Ravi Ashwin, while the Aussies have Mitchell Johnson as the best current bowler. He's taken 27 wickets in four Tests, at an average of 20.

The first two days are set for overcast conditions but high temperatures, while day three might have some rain. Days four and five look to be clear though, so hopefully interruptions will be minimal, if at all.

This venue is a good one for batting, as long as you make the most of batting first. Toss winners rarely choose to bowl, with skippers keen to get the runs on the board before the deck slows down. But by 'slow' we don't mean sub-continental.

Both sides will probably name strong pace attacks, with the hosts able to call on the trio that did so well in the Ashes, and if Mitchell Johnson is even slightly on form, the Indians might actually not want to bat first…