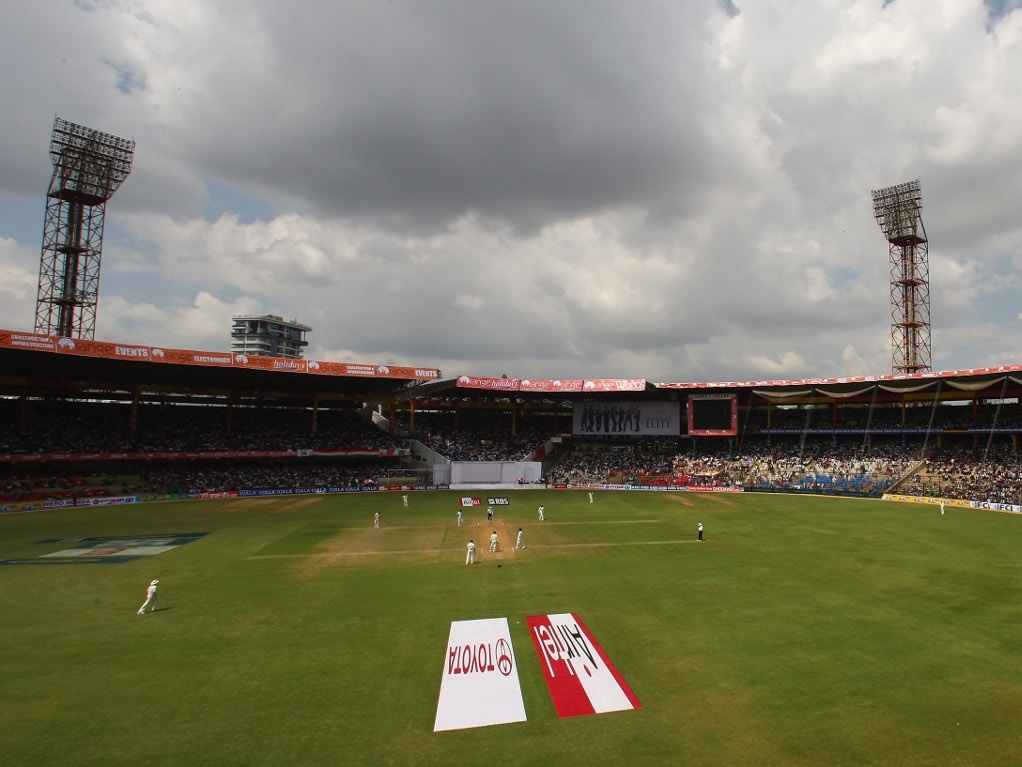 The ground used to go by the name of Karnataka State Cricket Association Stadium, but was renamed to honour former BCCI president and Karnataka administrator M. Chinnaswamy. There is no shortage of famous attractions in and around the stadium as it is flanked by Cubbon Park, a popular tourist destination in Bangalore, and Mahatma Gandhi Road, one of the city's busiest roads.

There hasn't been Test cricket here in more than three years, with the most recent in September 2012 when India beat New Zealand by five wickets after tea on day four.

The Black Caps won the toss and opted to bat, as one does here, and made 365 all out thanks to a century from Ross Taylor. While a decent score, they were bamboozled by a Pragyan Ojha five-fer.

India then actually fared worse, this time against pace as Tim Southee stunned the hosts by taking seven wickets. They were all out for 353, with Virat Kohli scoring a century.

The Kiwis were unable to take advantage of their slender lead, and crumbled to 248 all out, with Ravi Ashwin the five-fer master this time. This left India needing 261 to win, which they reached thanks to Kohli's 51 not out and MS Dhoni's 48 not out.

Of the current players, Virat Kohli has played one Test here and scored a century, while Cheteshwar Pujara has played here twice and has a top score of 72. Sachin Tendulkar is the leading run scorer here, averaging 62.

Bowling-wise, Ashwin's one match here saw him bag that five-fer, while Ishant Sharma has taken 12 wickets in two matches, averaging 21. He did not play in the 2012 Test though.

None of the current Proteas have played a Test here, and the last time the sides met in Bangalore was in 2000. The Proteas won that game by more than an innings.

Ravi Ashwin after the above Test: "This pitch was a bit more challenging. I tried to alter the pace on the third day, it was a bit more docile. I enjoy only bounce, that's one of the important ingredients I require from a pitch."

India's Virat Kohli after batting on day four: "It was a tricky situation when I went out to bat and me and MS took it ten runs at a time. I needed to be more patient and it worked. There was more turn today, it was a great cricket wicket."

There's a mixed forecast for the five days, with most days set to see some rain to some degree. Only day five looks like it will be clear, and by then the game could be over…

The track is a good one for batting when the sun shines, with the lowest team score as high as 195, and a top innings score of 626. But with cloud cover, pace could have an impact early on.

India are the firm favourites, unless South Africa's batsmen can find a way to combat the spinners they were so easily defeated by in Mohali. With R Ashwin and Ravi Jadeja in operation again, it will be tricky for the Proteas, as the top wicket takers at this ground are Anil Kumble and Harbhajan, spinners both.

India's batting line up should secure big runs if they win the toss and bat first (as people almost always do), and if they don't one imagines the bowlers will do the job, as long as AB and Amla don't get going.