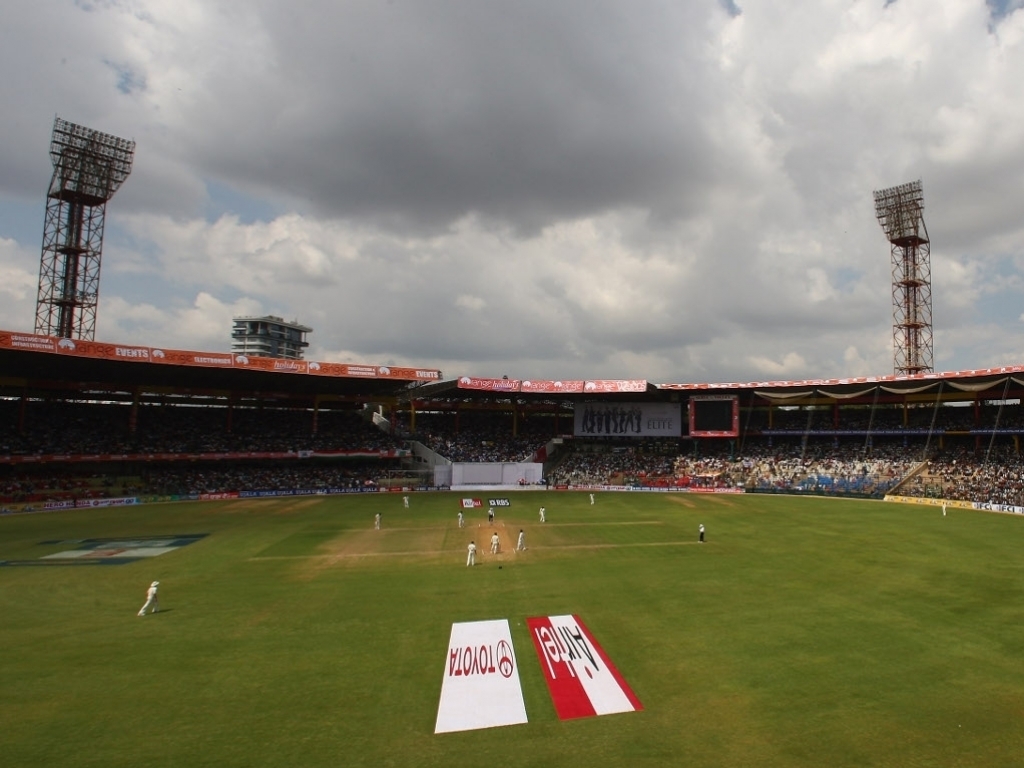 Originally named the Karnataka State Cricket Association Stadium, the ground was renamed after M Chinnaswamy, who was the president of the Indian board from 1977 until 1980, and was involved in the administration of Karnataka cricket for close to four decades. The foundation for the construction of the stadium was laid in May 1969 and building began in 1970.

The stadium was given Test status in 1974-75 and hosted West Indies in the opening match, although the stadium was only half-built. That match was also the debut of two West Indian greats, Gordon Greenidge and Viv Richards.

The ground also played host to Sunil Gavaskar’s final Test innings – a masterclass on a minefield – when India went down to Pakistan in the series decider in 1987.

The stadium was renovated before the two sides met each other again in another titanic encounter; the World Cup quarter-final in 1996, when floodlights were installed for the first time. Since then, Bangalore has proved to be a lucky venue for visiting teams with South Africa, Australia and Pakistan winning crucial games. South Africa’s historic series win in 2000, Michael Clarke’s sensational hundred on debut, Inzamam’s century in his 100th Test and Anil Kumble’s 400th Test wicket have been the highlights over the last decade.

The pitch ahead of the first Test match between India and Afghanistan. @MadridistaSays reporting from the M Chinnaswamy Stadium in Bengaluru@BCCI @ACBofficials pic.twitter.com/HepyDz0z4J

India beat Australia by 75 runs on a pitch that would be rated below average.

The hosts won the toss and elected to bat first but had Lokesh Rahul to thank for averting complete disaster on day one as his 90 led the India effort of 189 all out with Nathan Lyon bagging 8 for 50.

Australia established an 87 run first innings lead with half centuries from Matt Renshaw and Shaun Marsh helping the tourists to 276 all out with Ravindra Jadeja taking 6/63.

Cheteshwar Pujara top scored with 92 in India’s second innings effort of 274 all out with fifties from Rahul and Ajinkya Rahane helping out while Josh Hazlewood took 6/67.

India would bowl Australia out for 112 on a rapidly deteriorating pitch with Ravi Ashwin taking 6/41.

Pujara has aggregated 242 runs in six innings across four Tests at the Chinnaswamy making him the leading runscorer in the current India squad, his highest score came in his last Test innings there against Australia.

Ashwin has bagged no fewer than 18 scalps in just three Tests at the Bengalaru venue to make him the leading wicket-taker at the ground in the current India group.

Afghanistan are playing their first Test.

Each of the five days of scheduled play could possibly see rain while temperatures are expected to be warm to hot.

With India preparing for a tour of England the pitch at the Chinnaswamy might not take as much turn as usual which given the quality of the tourists tweakers may be a sound strategy.

The team winning the toss are unlikely to deviate from standard practice in modern Test cricket which is to bat first.