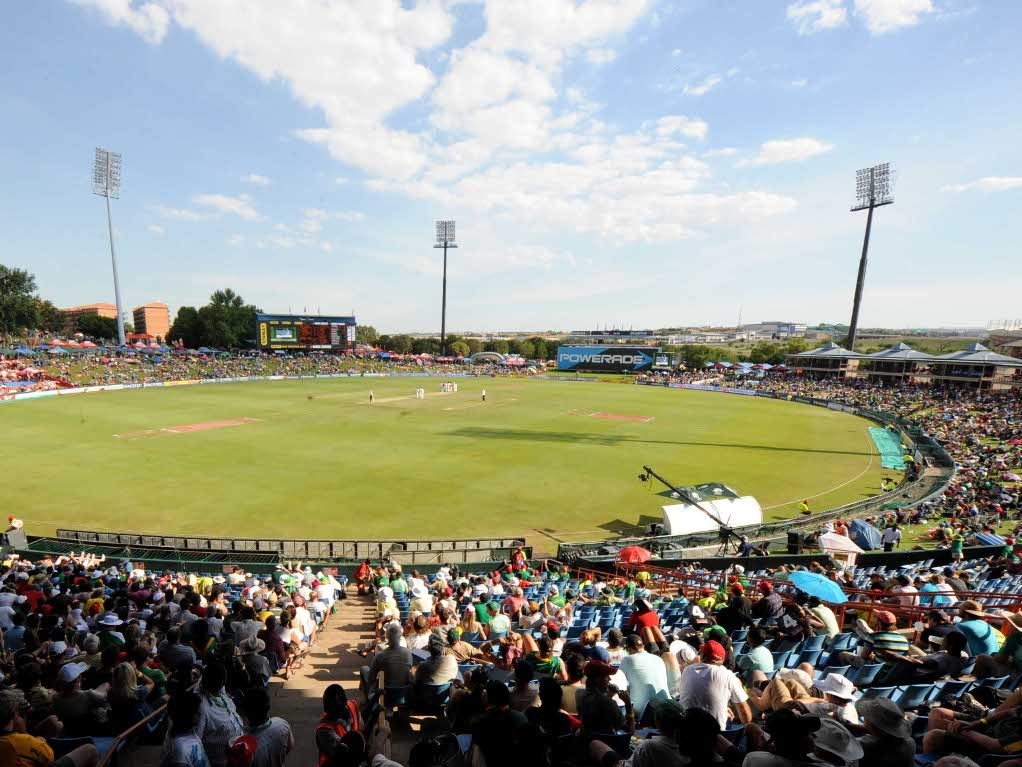 Within easy access of both Pretoria and Johannesburg, SuperSport Park is the home of the Titans franchise in South Africa’s domestic competitions

The major attraction for spectators visiting the 22,000-capacity venue is the grass embankments which provide for a friendly, family atmosphere. The main grand stand, with its spacious seating, stands alone at the Pavilion End – with corporate chalets dotted behind the sloping embankments.

The venue, formerly known as Centurion Park, is renowned for its fast-paced track and the small, carpet-like outfield makes for brisk run-scoring. While traditionally known as a seamer-friendly wicket, the pitch has provided assistance to spin bowling in recent times.

Situated on South Africa’s highveld, SuperSport Park is a stronghold for the Proteas, with the home side having lost just once in 18 Tests, a defeat with an asterisk hovering over it given the subsequent match-fixing revelations.

The ground has played host to a number of notable tournaments, including the 2003 World Cup, the Champions Trophy final in 2009 as well as key Champions League T20 fixtures.

The most recent Test at this ground was in February of this year, when Australia beat the Proteas by 281 runs, a rare loss at this venue for the hosts. They had last lost here in 2000, against England.

Australia's batting department took the momentum their gained during the Ashes and brought it to Africa, with the Proteas mistakenly putting them in to bat. Shaun Marsh and Steve Smith's centuries saw them to 397, with Dale Steyn taking four wickets.

The Proteas then put on 206 all out thanks to Mitchell Johnson's seven-fer. The paceman, like his batsmen, also continued where he'd left off in the Ashes, and only AB de Villiers' 91 saw the hosts pass 200.

While Steyn took two more wickets in the next dig, David Warner's century and Alex Doolan's 89 ensured a comfortable lead, and the Aussies declared on 290 for four. This left SA needing 482, or bat out two days.

They could do neither, as Johnson added five more wickets to his game tally, and the Proteas were all out for 200. De Villiers again top-scored, but this time with just 48.

SA captain Graeme Smith after the loss: "AB showed tremendous skill on a difficult wicket, the rest of us have performed well for a period of time so need to look back to those moments."

Michael Clarke: "It doesn't feel like an easy win when you are out there. You have to be on from ball one and we were. We knew it would tough on day one but we thought the cracks would come in. Mitchell is at the top of his game, he's fit and strong and his execution is perfect."

Mitchell Johnson: "We bowled really well as a team. We felt there was a little in the wicket, we saw Morne get some bounce. When plans come off it's really nice."

SA spinner Robin Peterson ahead of Windies Test: "It is one of the smaller grounds (in the country) and it can be unforgiving if you stray in line or length. I think my mind-set lately has been more aggressive. I don't spin it a lot, but my change of pace is my biggest asset."

Aside from Jacques Kallis, AB de Villiers is the only Test batsman to score more than 1000 runs here. He averages nearly 63 at Centurion, his home ground, and has three Test tons and five half centuries to his name.

Otherwise, Hashim Amla is third on the list behind Kallis and AB, and the skipper will be looking to add to the three centuries he has here already, in only eight matches.

For the Windies, Chris Gayle has the most runs here but he's out injured, so Shivnarine Chanderpaul is next. In the two matches he's played here, he's amassed a total of 150 runs. None of the bowlers have played here before.

Bowling-wise, Dale Steyn is the best of the current lot, second behind Makhaya Ntini. Steyn 42 wickets in seven matches and averages under 22 with the ball. Morne Morkel has 18 wickets in five matches.

According to the forecasts, there is supposed to be cloud cover on all five days, with thundershowers on day five. Knowing Gauteng's weather in the summer though, a bit of a rain burst is likely on all five days, but hopefully only after stumps. Temperatures are set to be in the mid-20s for the whole game.

According to reports from the ground, the Test will be played on the fifth deck, which is the slowest of the five and the most suited to spinners. That doesn't mean a lot of turn though, as the head groundsman feels it will crack up from day four.

The Proteas will probably pick Robin Peterson if they think there will be turn, while the Windies have Suleiman Benn to turn to in that regard. But it will still be a pacey deck, with Steyn and Cottrell likely keen to have a bowl.

The Proteas have a formidable record here, with a run of 13 Tests without defeat only broken by the extreme pace of Mitchell Johnson. Given the sides' recent form, it's not outlandish to think the Proteas could avoid day five's rain altogether.